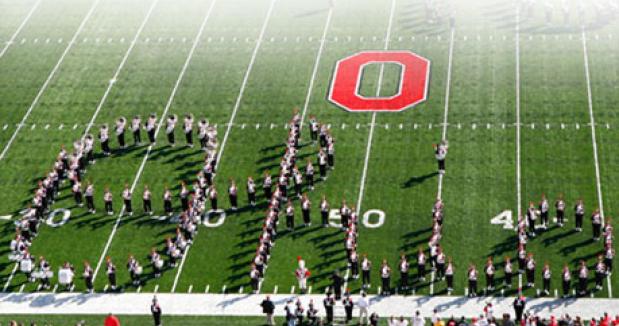 Traditions get us in the right mind set, bring us closer together, celebrate the moment and make events memorable.

The sport of football is all about traditions. Here are 11 of our favorites.

The House of Pain’s song “Jump Around” is played between the third and fourth quarters at Badger football games to pump up the crowd. Led by the student section, the Badger faithful stand up, dance and, well, jump around to their hearts’ content. The Camp Randall Stadium stands seems to rock in tune with the beat.

The tradition of playing “Jump Around” began on Saturday, Oct. 10, 1998, at the Badgers’ Homecoming game against the Purdue Boilermakers. After the Badgers were held scoreless through the third quarter, one of the Badger’s marketing folks in charge of sound piped the song through the stadium’s sound system. It revved up the fans and players, and the Badgers won the game. The tradition continues on.

When you combine world class BBQ with football excitement and Kansas City hospitality, you’ve created a bucket list item for sports fans. And tailgating at Arrowhead Stadium before a Kansas City Chiefs game brings all these elements together in grand fashion.

Tailgating for football games is a time-honored tradition for most teams across the country, but Chiefs fans have a passion and approach that makes this a cultural experience not to be missed. After cooking up your own BBQ pregame, you might want to check out one of these Kansas City restaurants postgame for some BBQ ribs: Oklahoma Joe’s (a top notch BBQ restaurant connected to a gas station – go figure), Gates Bar-B-Q (multiple locations) or my favorite, Fiorella’s Jack Stack Barbecue.

Auburn Tigers – whose official mascot is Tigers not Eagles – like to say, “War Eagle,” as a greeting like Kansas enthusiasts say, “Rock Chalk,” or Alabama fans say, “Roll Tide.” War Eagle also is the title of Auburn’s fight song and the name of the University’s golden eagles.

Prior to Auburn home games at Jordan-Hare Stadium, War Eagle (the golden eagle) is released for a fly around while War Eagle the fight song is sung.

From Johnnie Morton’s “The Worm” to the Victor Cruz’s touchdown “Salsa,” it’s fun to see football players celebrate a TD with style. Cruz’s salsa dance is a tribute to his deceased grandmother, who taught him how to salsa and loved touchdown celebrations.

One of the most memorable touchdown dances belonged to Cincinnati Bengals’ running back Ickey Woods, the “Ickey Shuffle.”

7. The NFL on Thanksgiving Day

Like eating turkey and cranberries, watching the Detroit Lions and Dallas Cowboys play on Thanksgiving Day is a tradition for many households. The Lions’ tradition goes back to 1934. They’ve played every Thanksgiving except from 1939-44. The Cowboys’ tradition of playing on Turkey Day began in the ’60s. Good food and good football are a potent combination.

Imagine a college football team that adhered to a policy of no tackling during practice. No laps. No whistles. No calisthenics. No cuts. No swearing. Oh, and there was no calling the coach, “Coach.” Just call him “John.”

Former University of St. John’s (Collegeville, Minn.) football coach John Gagliardi had a lot of hard evidence that supported his “Winning with No’s” approach. He won more games any college football coach during a career. He retired with 26 conference championships and four national titles in Division III. His career winning percentage is in the high .700s.

Another nice touch that high school and college coaches in all sports should consider following: All seniors on the team were captains. Every one of them, whether the kid was a star or a bench warmer.

When “The Best Damn Band in the Land” dots the “I” in Ohio, it’s a big deal. Many sousaphone players and celebrities have shared the privilege. Golfer Jack Nicklaus and Bob Hope were two notable dotters. The Script Ohio formation is performed before home games at The Shoe.

Before the annual Army-Navy game, cadets and midshipmen march onto the field as they progress to their seats. The rivalry began in 1890 and for many years has been played at a Philadelphia stadium, a neutral site. The marching of the cadets and midshipmen creates quite a spectacle. The game traditionally concludes with both student bodies singing the alma maters of both schools.

OK, this is another touchdown celebration, but it deserves its own listing. When Packer players jump into end zone stands to celebrate a touchdown, it’s known as the “Lambeau Leap.” Invented by Packer great LeRoy Butler, a safety, Butler jumped into the crowd after scoring a TD on a Reggie White fumble recovery and lateral. Since then, it’s been the dream of every Packer to negotiate the Lambeau Leap after scoring.

Green Bay is the smallest city to support an NFL franchise. Green Bay citizens have a special connection with the team, and the fans’ warm embrace of players making the Lambeau Leap is just one example of that.

When Texas A&M played Centre College in 1922, the A&M coach asked E. King Gill, a former football player who was only playing basketball to suit up. Gill did just that and was the only man standing on the sidelines by the end of the game. Gill later said, "I wish I could say that I went in and ran for the winning touchdown, but I did not. I simply stood by in case my team needed me."

Being ready for duty was enough for the Aggies, and the 12th Man tradition was born. It’s now popular for many football teams to refer to their fans as “the 12th Man.” The Seattle Seahawks have even retired the number 12 from its uniforms to further recognize the importance of their fans.

1. “Picking Up Butch” at Middlebury College

Middlebury College in Vermont is home of the best football tradition, “Picking Up Butch.” Middlebury College student-athletes have helped Butch Varno, who suffers from cerebral palsy, attend sporting events such as football and basketball games for more than 50 years.

Back in 1960, Middlebury student Roger Ralph saw Varno’s grandmother struggling to move Butch’s wheelchair through snow on the way home from a football game. He assisted them that day and offered to drive for the next game. Thus, the “Picking up Butch” tradition was born. Middlebury athletes from various sports have been driving Butch to and from sporting events ever since.

How great is that?