Fit your offensive linemen to the blocking scheme 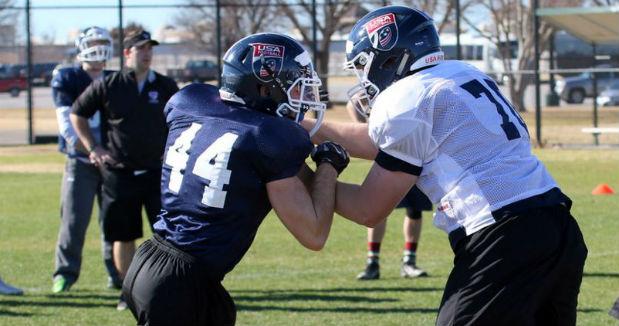 Offensive line is a highly technical position. Fitting the scheme to personnel is as important as it is to fit a quarterback into a system.

In essence, success of the unit comes down to teaching and factoring in the strength of what the coach knows and is comfortable with. However, we should always remember that it is much easier for a coach to learn something than for the entire unit to adapt their skill sets to something that they are not best suited to perform.

Much of this comes down to deciding between man schemes, gap schemes and zone schemes and which fit best with the offensive line.

Beginning next week, I will share a 10-part series on implementing zone schemes at any level.

SEE ALSO: Build a plan to improve pass protection for next year

What suits your players best?

In my career, I have bounced between zone schemes and gap schemes with a few man schemes added in. My understanding of zone was merged with how we utilized our gap schemes.

Having used both types of schemes in a single season, I philosophically believe a unit can only be good at one. The technique and time that must be spent on the different skills requires attention, detail and focus. A team can win and move the ball in either scheme.

Today’s game requires that we pay attention to the techniques we teach so that we ensure they are the safest for the shortterm and longterm health of the player. The head must be kept out of the block.

Though I do not use the techniques as a coach, I remember a time when the head and facemask were utilized as points of contact. Both sides of the ball can be aggressive and physical without using the head as a tool for contact.

Regardless of the scheme chose, safety is of prime importance in the game today because of what we have learned through science.

Zone blocking schemes rely on double teams and lateral movement to distort and displace defenders. Usually, smaller, more athletic linemen are best suited to this as they are not relying on brute force as much as on footwork to make the defender fight the reach and thus open a running lane.

Zone schemes require the entire unit to have a sound understanding of gap responsibility as well as being able to read which defender is moving to the gap each is responsible for.

As a coach, the one zone scheme running play I fell in love with is the stretch. It is a play in which hand placement and footwork are the primary focus, and the head does not become involved at all. We had two seasons in which this play averaged more than 10 yards per carry. Our linemen were undersized, but they could run, and we utilized their athleticism to open lanes.

Man schemes are more suited to bigger, stronger linemen who can maul defenders, usually in a one-on-one situation in which they are pushing defenders out of a gap. Of course, technique is still a focus.

Defensive movement sometimes hurts a man scheme as offensive players can chase a defender out of their responsibilities, opening open up lanes for the defense.

We had a stronger, stout bunch of linemen in 2011, and the gap scheme and man schemes worked better for us. We de-emphasized the zone schemes and put the focus on the gap and man schemes with a zone based teaching with gaps overriding the man.

Creating a good offensive line unit begins with a sound understanding of what they can do. In the coming weeks, we will focus on different techniques and creating a system that can vary from year to year to fit personnel needs yet still teach the same principles in blocking.