Aerobic exercise has its place in football training 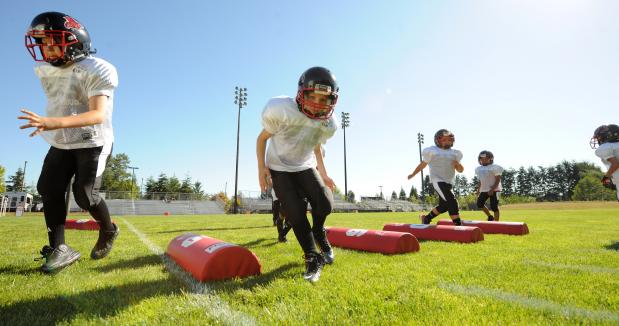 The word “aerobic” tends to conjure an image of Richard Simmons, Jane Fonda and ladies with bright spandex and side ponytails jazzing it up during workouts.

Mosby’s Medical Dictionary defines aerobic exercise as “any physical exercise that requires additional effort by the heart and lungs to meet the striated muscles' increased demand for oxygen.” Aerobic exercise increases the breathing rate and ultimately raises heart and lung efficiency. Prolonged aerobic exercise – at least 20 minutes three times a week – is recommended for the maintenance of a healthy cardiovascular system.

Once a staple of many football practices (“Take a lap, kid”), football coaches now bypass involving aerobic exercises into their practices because they think it's too easy, too long of a duration or not sport specific. But that’s not always the case.

Done correctly and with purpose, aerobic exercises can have a place in football and contribute to making athletes stronger and better at what they do. Keep in mind, though, that a super lap or a long distance run aren’t the only ways to incorporate aerobic exercises into practices.

Andy Ryland, USA Football senior manager of football development played football at Penn State, where he graduated with a degree in kinesiology. He said anything can be aerobic if done at the proper intensity.

“Keeping an athlete in the aerobic window allows for the increase of the respiratory window and recovery strength,” Ryland said. “The key is to stay in the aerobic zone by doing exercises at moderate or low intensity yet not anaerobic exercises.”

Coaches can be creative when implementing aerobic exercises into their practices because they can potentially create an aerobic exercise out of any drill – as long as it is done for a continuous amount of time with moderate effort.

Athletes also tend to get bored during long, slow conditioning or become unfocused during conditioning drills that are not sport specific.

“Instead of a long sprint or 20 minute run, try having your team run through plays or routes at moderate intensity. It will increase heartbeat and requires more involvement from the lungs to supply the muscles with oxygen, resulting in an increase of stamina, strength and lung capacity.”