3 things every great kicker does 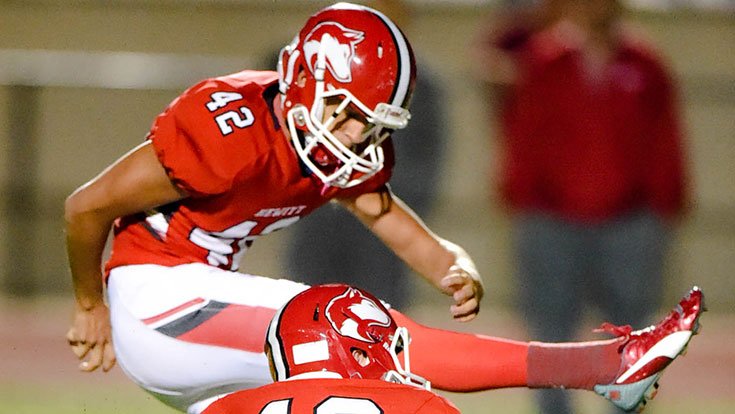 John Carney enjoyed 23-year career in the NFL, playing for seven teams and twice reaching the Pro Bowl. He retired fourth all-time in field goals made and third all-time in scoring.

With his experience and knowledge of the game, Carney now serves as a coach, training and consulting kickers and punters.

So take it from someone who has made a career at the highest level of football. Here’s Carney’s three tips on how to become a great kicker.

“Every great kicker has a method of getting to his exact CSP (consistent starting point)… every time,” Carney said. “The ‘step-off’ must be practiced and perfected, because if the CSP is inconsistent, the kicks will be inconsistent.”

What Carney is talking about here involves routine. Having a set routine makes for a clean, consistent approach that is critical for kickers. The approach needs to be second nature, and it all starts with the CSP.

Every kicker will have a different approach and CSP, but Carney offers some advice for developing a consistent routine.

First, the kicker must take comfortable steps in addressing the kick. “Your personal routine should incorporate comfortable steps that are easily repeatable,” Carney said. “Long steps or quick short steps will be inconsistent in a rush situation or a pressure situation.”

Second, it is critical to lock onto an aiming point and maintain focus during the routine. This allows the kicker to confirm and re-confirm his target line. “The kicker should always be facing his target during this step-off routine.”

When younger, Carney made a common mistake while setting up for field goal tries. Fixing that went a long way toward consistency.

“In high school, I turned my back to the goal post and stepped forward to my 90-degree point, then turned and stepped out to my CSP,” Carney said. “In essence, I was missing out on confirming and re-confirming my target line throughout the step-off routine. I corrected this flaw in college and changed to stepping backward to my 90 degree, then stepping sideway to my CSP, always having my target line in sight.”

“Every great kicker maintains his same tempo leading into the kick,” Carney said. “All kickers have a specific tempo that matches their body type and their personal style of kicking. There are fast tempos, medium tempos and even slow tempos leading into the kick. If this tempo varies, so will the kicks.”

No two kickers will have the same tempo, so it is important for each individual to find the rhythm that suits both the body type and kicking style.

Carney said that taller body types tend to have slower tempos, while shorter body types have quicker tempos. A longer leg gives the kicker a longer lever, so the focus should be placed on developing a smooth and fluid swing. Conversely, a shorter leg is a shorter lever that requires a fast and explosive swing.

Carney also noted the importance of experimenting with different types of tempos on the practice field.

“A young kicker should test all tempos,” he said. “He will identify his best kicks with what tempo he used. Once he has established his personal tempo, he must continually replicate that tempo.”

Keep the head down

“Every great kicker keeps his head down, steady and still throughout the kicking motion,” Carney said. “The head has weight and mass, and when the head moves, the shoulders react, the torso follows and the result is a mishit and possibly a missed kick. Keep the head down, focus on solid contact of foot meeting the sweet spot of the ball, and finish the kick before raising the head to watch the flight of the ball.”

What is interesting to note here is the connection between head movement and total body movement. Keeping the head down not only improves the kicker’s level of focus but also makes for a more efficient motion.

Ultimately, the common thread is finding consistency. Being efficient from setup to kick will help make kicks second nature and consistent, which in turn helps to alleviate the pressure of the moment itself.

Former NFL kicker John Carney’s instructional DVD, "Kick, Punt and Train Like a Pro," can be found at Carneycoaching.com, Amazon.com, and WizardKicking.com.  Follow Carney on Twitter at @CarneyCoaching.