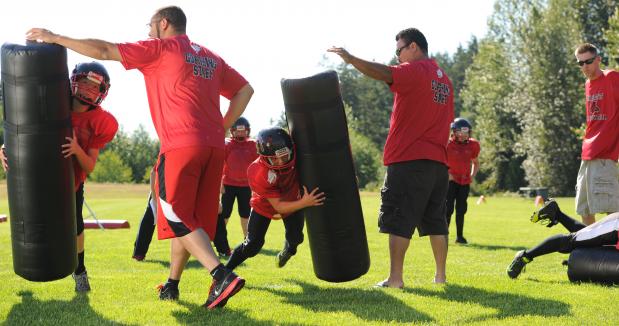 Parents and coaches see football through different sets of eyes.

And with the proliferation of news and information available at our fingertips, coaches not only must know what they are doing on the field, they need to be able to address any concerns and answer every question the parents have.

When parents watch your practices, they might be asking, “Is that drill safe for my child?” or “Are they going to get hurt?” This is what my mom would ask when I was kid.

If you, as a coach, can properly answer these six questions, then you know the drill is right for your players.

What is the purpose of the drill?

As a football coach, you must assess all of the drills within your practice plan to identify whether they build player confidence and athletes them more fundamentally sound.

Every drill should be able to be taught at a variety of speeds and intensities to establish a progression for the players. USA Football’s Levels of Contact accomplishes this, taking drills through air, bags, control, thud and live.

What skills are you trying to teach?

Every drill – especially at the youth level – should focus on teaching one skill at a time. Coaches can then build upon that foundation as the season goes on.

Every drill must have a purpose and a specific skill attached to it, helping players improve their abilities to be successful in a game situations. If the drill doesn’t accomplish this goal, change it or eliminate it.

For example, there is a common turnover drill involving two players engaged against two players where the coach throws the ball on the ground and the players are supposed to find the ball and recover it.

What skill is being taught? Blocking? Tackling? Ball stripping? Recovery? No. What’s being taught is wrestling and diving recklessly after a loose ball, exposing heads to contact.

A better option is a drill I call clean/dirty. The players are in groups of 10, standing in a line 10 yards away from a coach. On “go,” the coach rolls the football toward the first player and says “clean” or “dirty.” On “clean,” the player scoops up the football, tucks it away and scores. On “dirty,” the player falls on the ball and secures it.

Are you conducting a drill that teaches “toughness?”

This question ties into the previous one.

I too often hear youth football coaches say they do a drill because it makes their players “tougher.”

How does this help them in a game situation? A drill should teach players to respond faster, play fundamentally sound and make good decisions.

Making a player “tougher” doesn’t build player confidence because those drills always have a loser. What did that kid learn? More often than not that he doesn’t like football, and it’s our job as coaches to make all of our players better.

Being tougher doesn’t make you a better tackler. If anything, it fuels a player to take chances and stray from the fundamentals of the sport.

Instead, use the USA Football tackling circuit to teach the skills that players need in the game. Start against air and bags and don’t move to control, thud and live until the players are ready. 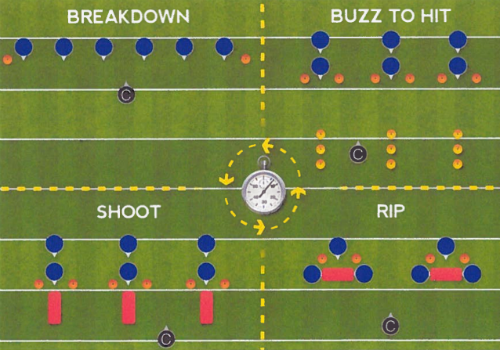 USA Football offers more than 20 tackling drills in its Film Room – which is included with all USA Football memberships.

Build confidence up so when it is time to tackle, the players are ready and fundamentally sound. You are asking for trouble when players are just being used as battling rams.

How does speed and distance come into play?

When setting up drill, it is important to know how far apart the players are and how fast they are running at each other.

If the drill looks like two rams bumping horns, any skill learning is lost in the distance.

The days of separating the weak from the strong are gone. It is about teaching the proper fundamentals and technique.

Watch the video below. Some of these drills are inherently dangerous. Others could be teaching tools by narrowing the speed and distance at which they are run

Does the drill design led to players being successful

Whether at the youth or the high school level, there will always be an experience gap between players. What might be second nature to some is an unknown to others.

For example, when teaching a player how to catch a ball, are you starting off right away 10 yards apart? Get closer and work your way to that distance.

Help players grasp concepts faster and build their in not dropping the football.

Does your drill maximize participation?

Do your drills have one or two players active and everyone else just watching? If so, then you have a circus line and are wasting precious practice time.

Players sitting on the sideline are not learning. They only get better by doing.

By involving the team as a whole, players get more reps in shorter times, building fundamentals and confidence.

Anthony Stone is a USA Football Regional Master Trainerand a physical education teacher at Gregory Elementary in Rockford, Ill. He has coached football at the youth, middle school, high school, college and indoor professional levels. He also is a coach for the U.S. Women’s National Team program. Follow him on Twitter @Coach_Stone_MTand ask him questions with the hashtag: #AskUSAHUFMT.