From NFL to youth football, females are showing that football has a place for them, too 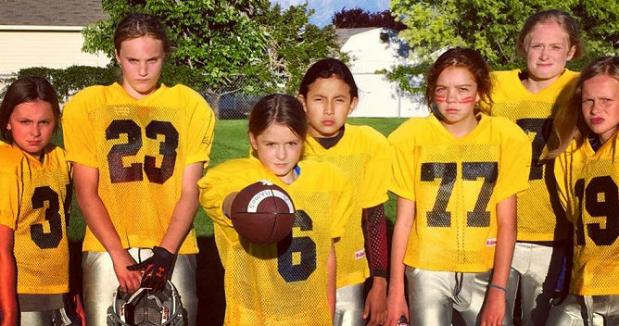 “For the times they are a-changin’.” – Bob Dylan

There was a time when football season was bad news for women in our country.

It was commonplace to refer to wives and girlfriends as “football widows” as men gathered in dens or frequented sports bars to watch the games all day and night.

For some families, Sundays became an 12-hour tradition between travel, tailgating and the game itself – with the men at the stadium while women cooked the food but stayed home so as “not to be in the way.”

Well, 2015 is a whole new ballgame. Women not only love football, but more and more are becoming active participants. 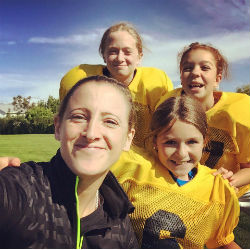 “It’s America’s passion, and to be honest with you it’s for the exact same reasons that boys and men love football,” said Samantha Rapoport (pictured at left), director of football development at USA Football. “I’m biased when I say it’s the greatest sport on earth.”

Today, women are involved in many different aspects of football – from beat writers and television reporters to leagues and club administrators to, yes, players and coaches.

And while the amount of active players remains low compared to their male counterparts, the numbers are higher than most think. It’s not just the all-girls league in Utah where female players put on helmets.

Pop Warner estimates that girls make up 1 percent of its 250,000 registered players. That’s 2,500 girls ages 5 to 14 playing tackle football in an organization that makes up 8 to 10 percent of total youth football participation.

Applied to the estimated 2.5 million youth football players, that number grows to 25,000 girls playing tackle football at the youth level.

And according to the National Federation of State High School Associations, there more than 1,700 girls who played high school football in 2013.

With all due respect to Cyndi Lauper, it’s clear that girls just want to have some fun playing football.

But why is the sport so appealing to women?

“The way that it’s played creates life skills and friends that you keep for life,” said Rapoport, who played quarterback in a women’s professional league and works closely with women’s football and flag football initiatives.

“It takes so much cohesion to be successful at it. In football, if you don’t do your job, 10 other people are going to look bad.”

“It’s obviously a huge milestone for female participation in football,” Rapoport said. “I don’t think that the country is really aware of how many women are fully engaged in football as participants, are involved at the coaching level at a high school or in the college ranks and are taking part from an officiating standpoint.”

These women provide inspiration to other females who aspire to launch a career in football.

At the youth level, more girls wanting to play and brings about decisions for their parents. It’s important that parents are using the same criteria to decide whether to allow their daughters to play football as they do for their sons.

“It’s incumbent upon them to make sure that the league is teaching football the correct way,” Rapoport said. “In our opinion, that means getting coaches certified through USA Football. Then it’s up to the parent to identify if the child wants to play and if your child is ready to play.”

Football is a physical sport that requires teamwork, dedication and discipline. It is a sport that provides opportunities for players of all shapes and sizes.

Now, it’s a sport in which women growingly find their place within it.

Peter Schwartz is an anchor and reporter for CBS Sports Radio and WFAN Radio in New York. You can read his general CBS New York sports blog at http://newyork.cbslocal.com/tag/peter-schwartz/. You can follow him on Twitter @pschwartzcbsfan. Peter and his wife, Sheryl, are the proud parents of Bradley and Jared. Bradley and Jared both play for the Levittown Red Devils of the Nassau Suffolk Football League on Long Island in New York.