The answer is still yes: We let our son play football 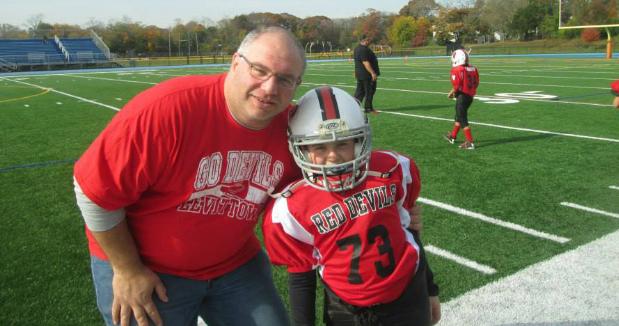 Why do people still ask me the same question and make the same statement?

“You let your son play football?” a coworker asked.

“Aren’t you worried about him getting hurt?”

The answers to those questions are “yes” and “yes.”

My son Bradley loves football, and my wife and I enjoy watching him play because it makes him happy. As far injuries are concerned, there are risks you encounter with so many things each and every day.

RELATED CONTENT: Why the Middle School Showcase was a great experience for my son

Back in November 2013, I wrote a blog for WFAN.com in New York that was later picked by USA Football titled, “Yes, our son plays youth football.”

To this date, it’s one of the most popular stories I’ve ever written in terms of the response from friends, other parents and colleagues in sports media. There are still so many people who are shocked that my wife and I allow our son to play football.

It happened once when we were at a party. Someone asked me what sports Bradley and Jared are playing, and I said Bradley is getting ready for baseball season and Jared is continuing with soccer. And then I added that Bradley will play street hockey over the summer and football in the fall.

“Football?” the guy said. “Ooh football. You let him play?”

And I know why people ask me this question all the time. I anchor sports updates on a national radio network, and there aren’t many days or nights that go by where I don’t give news of an injury in any sport.

And during football season?

We both know the questions are coming. It’s inevitable. I’ll admit it. My mother can’t handle the fact that Bradley plays football. When she visits New York and comes to a game, she has a hard time watching.

So what they’re saying is it’s OK to watch the sport and make a career out of it, but I shouldn’t let my kid play?

It’s so hypocritical, and I just don’t understand it. Yes, I know there have been and will always be injuries, and in some cases they are serious. But I’ll tell you this: My son knows more kids who have suffered significant injuries in bounce houses, household accidents and playground mishaps than kids who were seriously hurt playing football.

RELATED CONTENT: 15 life lessons from football that shouldn't be overlooked

Are there bumps and bruises throughout the course of a season? Yes, absolutely.

But injuries like those occur everywhere. And that encompasses all sports, including baseball. One spring, the starting pitcher on Bradley’s team couldn’t play in the championship game because he sliced his hand trying to open a can of dog food.

At the same time, there are kids who are playing the sport from coast to coast, from the pee wee ranks to high school. How could my wife and I tell our son that he shouldn’t play and then sit in front of the TV on Sundays and cheer on the New York Jets defense to sack the other team’s quarterback?

When my son tells my wife and me that he doesn’t want to play anymore, that'll be when he puts the football down. Bradley watches the news and he watches SportsCenter. He knows there are injuries, but he also knows you can’t be afraid of getting hurt.

Yes, our son plays football, and we have no problem with that.

Peter Schwartz is a sports anchor for the CBS Sports Radio Network, FOX News Headlines 24/7 and WCBS 880 Radio in New York. His older son Bradley plays youth tackle football for the Super Bowl Champion East Meadow Rams on Long Island, while his younger son Jared plays flag football for the LSW Giants. Peter, his wife Sheryl and the boys are busy cheering on the New York Jets when they’re not at a youth football field.

This is an updated version of a blog that originally published March 15, 2016.