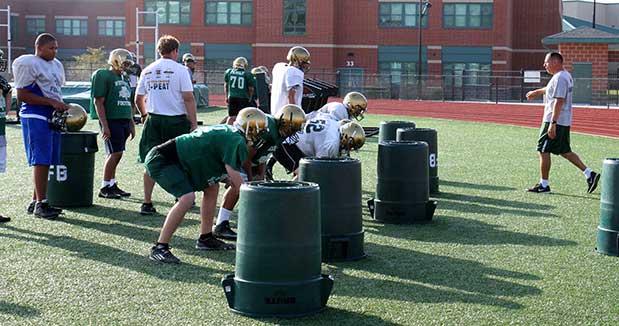 A week into the preseason, many coaches are challenged to find and create the starting offensive line unit.

Today’s coaching climate demands complete transparency between players and coaches, including answers that are more black and white than gray. While the media has for decades talked about “quarterback controversies,” any position can turn into a controversy without an objective system for naming starters and slotting back-ups correctly.

The line is the unit that makes every offense go, and while the position might not be as glamourous others on that side of the ball, chemistry and execution are critical for everyone else on the offense to do their job.

A simple system for grading practice and games can ensure that the best five players for the job are on the field.

What most coaches see as the biggest challenge – filming practice – is easily accomplished with today’s technology. The answer is found in just about everyone’s pocket.

With a smart phone, any offensive line coach can have practice filmed from behind the offensive line. It’s even better if a tablet is available.

Either way, handheld devices allow coaches to evaluate the offensive line play from any angle.

Recordings can be uploaded directly to Hudl to cut, splice and share. If the team doesn’t have a Hudl account, the view from the phone or tablet is enough to evaluate each practice rep.

The best view is from about five yards behind the tailback. The person recording should be sure to get a view from a few yards outside each tackle or tight end

It takes about five minutes to walk through any trainer or player to get these recordings. There really is no excuse for an offensive line coach to not film a tight angle during practice.

The next step is to create a grading system that provides instant and clear feedback needed. I use the three Fs: footwork, fit and finish.

We also use an asterisk (*) to indicate a star block. A star block fits the following criteria:

We make the lineman themselves come up with the final calculation. Most of our grading is done on a separate template called “lineman grading,” in which each position has a column. We put a series of three marks (+, -, *) on the plays. Each lineman will go through the film on their own and calculate their grade for footwork, fit and finish. This gives them some good feedback on areas they must improve as well.

The players go through and calculate their grades for each practice and we keep running totals. This allows us to know who is performing well and creates a very objective system for naming starters and slotting back-ups.

In the end, it creates a culture in which each player is responsible for his performance and allows the coach to avoid any controversy over playing time.