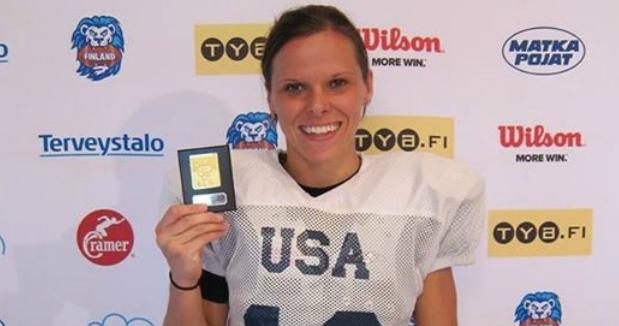 Whether she is starting at quarterback, making personnel moves as general manager or competing for a gold medal, Katie Sowers is home on a football field.

Now, the former U.S. Women’s National Team member has an opportunity to add to her resume later this month as a member of Charlie Weis’ coaching staff at the East-West Shrine Game. Kickoff is 4 p.m. ET Jan. 23 in St. Petersburg, Fla.

“I have a passion for coaching and a passion for leading people,” Sowers said. “Since I was little I have had a dream of making a career out of football. I even have journal entries to prove it.”

Sowers will represent the East as an offensive assistant under Weis. She looks forward to making the most of her opportunity.

“I’m very excited,” Sowers said. “I’ve been researching the players to get to know their background, skill sets and positions. I strongly believe that coaching and playing is all about relating, and if I’m prepared then I can coach these kids to the best of my ability.”

From 2012-14, Sowers was the offensive coordinator for Shawnee Mission North, a junior high team in Kansas. She also contributes to USA Football’s Heads Up Football program as an assistant master trainer.

But before Sowers was calling plays and teaching the sport from the sideline, she was causing havoc as a defensive playmaker. In the 2013 IFAF Women’s World Championships, Sowers played defensive back and was selected to the all-tournament team. In the team’s semifinal match-up against Germany, Sowers was named game MVP after she recorded five interceptions in that game, returning three for touchdowns.

“To wear the red, white, and blue was unbelievable,” Sowers said. “It really showed me that coaches are able to care about a person and teach them a game plan. And without that first part, you won’t be successful.”

By day, Sowers’ is the Kansas City Parks and Recreation athletic director. She also helped to re-establish the Kansas City Titans, a team that plays in the Women’s Football Alliance. Not only is Sowers the team’s quarterback, but she is also their general manager.

Playing football is near to her heart. It’s what she wakes up every day thinking about.

“I don’t do all of this to prove a point,” Sowers said.  “It’s not to show that women can do what men can do. It’s because I love football.”