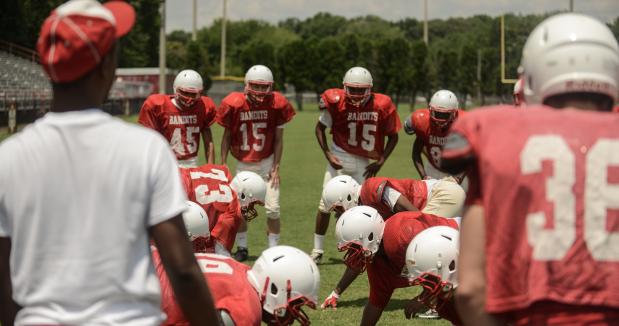 The square pull is the classic trap pulling style, done by opening the playside foot away from the line of scrimmage.

The square pull is used on counter and trap plays where the blocker is assigned to an opponent on the line of scrimmage.

The video below shows the general objective of the block: block a first level defender and widen the hole on the line of scrimmage. The right guard is the puller.

Square pull footwork is done by aggressively opening the playside foot away from the line of scrimmage. The playside arm rips backward with the step. Think of the image that the hand and foot are connected by a string, and they move together.

This first step should put the hips at a 45-degree angle toward the targeted defensive lineman.

The puller then works into the line of scrimmage to maintain an inside position. If the defender goes upfield, simply turn out on him. If he sits, explosively drive the shoulder pad into the defender’s inside number while simultaneously running his feet and rolling the hips.

By hitting with the shoulder, we emphasize the eyes staying up and keeping the head out of the block. The blocker targets the backside of the defender if he remains square or the upfield number if he turns his shoulders.

The video below shows a frame by frame analysis of the square pull technique and coaching points.

There is a progression in order to install each technique. Start the initial footwork.

Teach linemen by setting up cones and have them move to those as targets, keeping the focus purely on footwork. Working footwork daily during warm-up drills is a good way to teach the muscle memory to get them going in the right direction. In the video example, the linemen are practicing the skip pull footwork.

When blockers become proficient with footwork, it is time to work the blocks in a more gamelike setting using a half line or full line to teach how they will need to move around other blocks on the line to get to their targets.

When working on pulls, do them in either a half-line or full-line setting. Working around cones does not offer the game setting that is vital to having proper and effective pulls.

For instance, the backside guard in a power scheme must get used to pulling away from the line of scrimmage and clearing room for the center to block back – all while simultaneously staying square and being able to work downhill off of the playside guard and tackle working their deuce call. The guard then finishes with inside leverage on the playside linebacker.

Doing this solely against cones and bags just does not replicate the conditions.

The video below shows us working our counter play with the puller being able to work in a gamelike environment against bodies instead of around cones or cans.