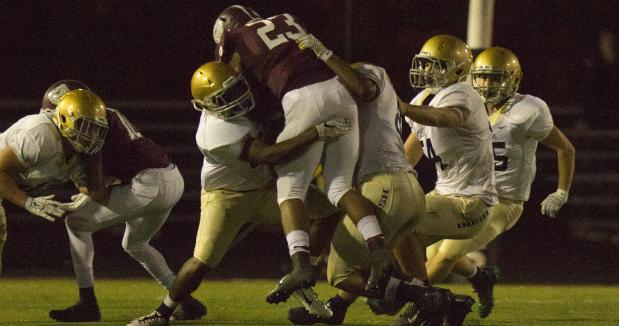 USA Football launched Heads Up Football nationwide in 2013 for youth football programs and in 2014 for high schools. The initiative is aimed at fostering a comprehensive approach to improve how the sport is taught and played.

The program is now making its way into college classrooms, thanks to a former football player and current college professor.

“This is the new revolution of coaching football. You all are going to make the difference and we need to start now,” said Dr. Drew Zwald, the director of coaching education, professor and the former director of the Physical Activity Program in the School of Health and Kinesiology at Georgia Southern University (GSU).

The program caught the eye of Zwald while he attended a national coaching conference a few years ago. A representative from USA Football joined the conference and presented the Heads Up Football initiative.

“I went to the presentation and said to myself, ‘Boy, I really like this concept, we need to look at it,’” said Zwald. “We decided to implement Heads Up (into the curriculum) the following year.”

Zwald spent time as head coach at Thomas Johnson High School (Frederick, Md.)and was very involved with the organization that developed the national coaching standards that were released in 1996. He also played football throughout high school and while at William & Mary.

He has extensive experience in the classroom, coaching and on the gridiron, which provides a unique crossroads of knowledge that he has blended at GSU.

According to Zwald, Georgia Southern University is the second university in the United States to have a nationally-accredited coaching program.

The accreditation includes the portion of the program that is aimed at Level III coaches, “where we are preparing high school, middle school and recreational coaches,” said Zwald. “We also have a completely online master’s degree in coaching for high school, collegiate and elite coaches.”

Heads Up Football has been fully integrated into core curriculum at GSU at all levels.

The initiative itself is something Zwald strongly believes in, creating a better and safer game. He instills this same approach in his students.

“Number one, the content. How (USA Football) is teaching heads up tackling, which was the first thing I wanted to get across to our students. Number two, all the other resources USA Football offers. Students at GSU use those resources in a variety of ways within the context of the class,” he said.

The high praise is paid by someone who would know. Zwald has been around football his entire life. His father Norm is in the Pennsylvania High School Football Hall of Fame.

“He was very unique and way ahead of his time,” said Zwald. “He was doing things back in the 60s and 70s that USA Football is now suggesting we do.”

When you think of high school coaches during that time, often the prototypical cliché comes to mind of an old-school, hard-nosed coach who takes no gruff. Memories of a particularly stern coach who loved to make his players run until they drop or hit until they quit are plentiful in high school folklore. Movies have been made revering this type of coach, like Friday Night Lights or Remember the Titans.

However, Norm Zwald couldn’t have been further removed from this cliché. In many respects he was more comparable to current coaches. He helped pioneer practices such as proper hydration, limited live tackling, and rest periods during practice. He also had an eye toward involving as many players as possible.

After such a progressing high school experience, the younger Zwald was in for a rude awaking when he arrived to play football at William & Mary.

“That is what I experienced in high school and then went to college and found out, you know what, that is not what they were teaching,” said Zwald.

The youthful memories combined with his real-world experiences solidified Zwald’s desire to go into teaching and attempt to provide a better and safer experience for young football players.

“Anything that I can do to give back to kids that want to participate in sports has always been a real passion of mine,” said Zwald.

“It has been very important to me that I try to provide the best coaches we can produce so kids, number one, would have the best possible experience with sports. Number two, so kids can have a safe experience. That is why I have been involved in this effort.”

Zwald implores coaches to adopt the education that USA Football delivers through Heads Up Football and its other programs and resources.

“You need to look, especially if you have a seven or eight year old playing tackle football.”