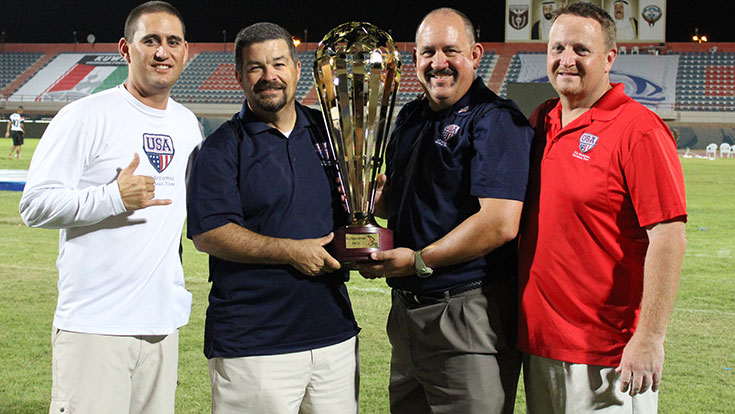 Regaining composure, some halftime adjustments and a little help from the U.S. military in attendance added up to victory for the U.S. Under-19 National Team at the IFAF World Championships on Wednesday evening at Al-Nasr Stadium in Kuwait City, Kuwait.

After trailing at halftime, the U.S. (4-0) scored on four consecutive possessions in the third and fourth quarters and rallied for a 40-17 victory over Canada in the gold-medal game.

Quarterback Bryan Scott (Rolling Hills, Calif.; Occidental College) capped all four drives with touchdown passes and was named the team’s MVP. He completed 7-of-9 passes for 187 yards and four scores on the day.

“We went into halftime and regained our composure as players and coaches,” U.S. head coach Aaron Brady said. “We made some adjustments to our game plan on offense. We also were fortunate that Col. Jason Hanover was on hand with some of his troops and spoke to our young men about representing our country. All of those things got us back on track, and we played very well in the second half.”

After holding a 14-12 lead at the halftime break, Canada (3-1) took the second half kickoff and drove to the U.S. 30-yard line. The American defense stiffened and forced a punt with 8:25 left in the third period.

It was all USA from there.

Scott hit running back Rashard Alston (North Charleston, S.C.; Newberry College) for the 2-point conversion, and it was 20-14 USA.

Defensive tackle Jack Carroll (Oakton, Va.; Gonzaga Prep) recovered a fumble on Canada’s next play from scrimmage, and the Americans had the ball at the Canada 49-yard line.

Scott went on top immediately, hitting Kelsey on a 49-yard touchdown pass down the left sideline to make it 27-14 USA with 5:26 to go in the third.

After the U.S. forced a quick 3-and-out, Scott marched his team 55 yards in just five plays and found Kelsey deep over the middle on a 26-yard score. The lead was 34-14 with 2:40 left in the third.

A short Canada punt gave the ball back to the United States at its 45-yard line, and again it took five plays to cover 55 yards and find paydirt. This time Scott hit receiver Khaneil Bruce (Cambridge, Mass.; Nassau CC) for a 32-yard score, and it was 40-14 with 10:51 left in the game.

“It was a total team effort,” Brady said. “We got contributions from everyone in uniform tonight. Offense, defense, special teams. Everyone. Our coaches did a great job. Our guys made plays on both sides of the ball. We had a mission to win the gold, and we got it done.”

The Americans started the game quickly, scoring on their first two possessions to go up 12-0 just 5:47 into the contest.

A 6-yard punt by Canada put the U.S. in good field position before quarterback Easton Melancon (Ama, La.; Louisiana College) hit Kelsey on a 36-yard TD pass on a corner route. and the U.S. seemed in control.

But the defending gold medal winning Canadians rallied and controlled much of the remainder of the half. Canada took advantage of a U.S. turnover and 76 yards in penalties by the Americans in the opening 24 minutes to take a 14-12 lead into intermission.

Brett Hunchak threw a 35-yard TD pass to Louis-Mathieu Normandin with 4:39 left in the first quarter to make it 12-7. Hunchak then found Marc-Antoine Pivin on an 18-yard touchdown with 6:56 left in the half.

But the Americans got things together at halftime and won their second gold medal in three trips to the U-19 World American Football Championships. The U.S. also won gold in 2009 but fell to Canada in the 2012 tournament. The next IFAF Under-19 World Championship is scheduled for 2016 at a site to be determined.

A full schedule from the IFAF Under-19 World Championship, including box scores, is available here: http://ifaf.org/articles/view/1546.

Games also are being archived on YouTube at: https://www.youtube.com/channel/UC87W6efPYQZuqoy3jYgRlQw.