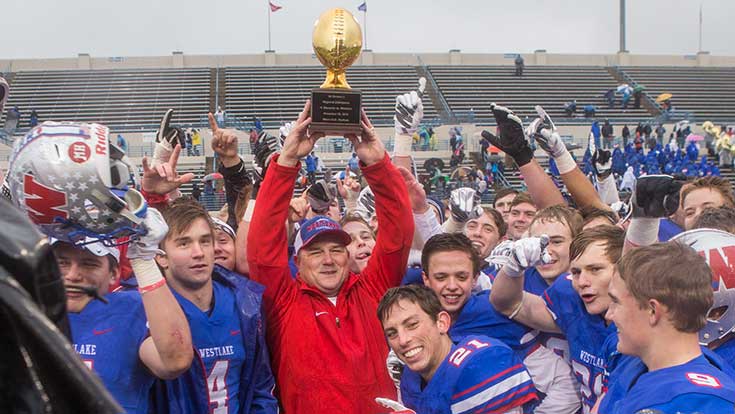 Texas high school football has a tremendously rich history that includes some of the best coaches ever to grace the sidelines. Even amongst a lineup of coaching legends, Todd Dodge is a titan within the Lone Star State.

The 53-year-old Port Arthur, Texas native was the architect of the Carroll (Southlake, Texas) dynasty that captured four state titles in five seasons.

During Dodge’s last five seasons at Carroll, the team posted an astonishing 79-1 record despite facing some of the stiffest competition in the state. The tremendous stretch of success was punctuated by victories in some of the biggest, most memorable games in state history.

Dodge’s teams have been characterized by finding a way to win the big game.

The following season saw Dodge guide Carroll to a 34-20 victory over Katy, avenging the team’s only loss during the nearly flawless five-year stretch. The showdown between the unbeaten teams was one of the most anticipated games in state history.

A year later, Dodge maneuvered past Euless Trinity by the score of 22-21. Carroll capitalized on a botched fake punt in the game’s waning minutes to notch the game-winning score in front of a crowd of more than 46,000 fans.

One of Dodge’s secrets is the ability to inspire his players to believe in themselves.

Dallas Morning News writer Matt Wixon, who has covered the Dallas-area high school football scene for more than a decade, believes that Dodge’s ability to inspire his players helped Carroll come out on top in big games.

“A lot of people don't remember that the [Carroll] Dragons were also in a lot of tight spots in the playoffs,” Wixon said. “Dodge's players loved to play for him, and I think he instilled in them a confidence that they could overcome any challenge if they executed the team's plan.”

Now the coach at Westlake (Austin, Texas), Dodge’s knack for pulling out big victories has not faded. Last December, Westlake pulled off quite an upset during the Class 6A-I state semifinal against Allen (Texas).

Allen entered that game every bit the perennial juggernaut that Dodge’s Carroll squads were in the 2000s. Allen was a three-time defending state champion and touted a 57-game winning streak while only two wins away from its fourth-straight state title.

The result was Dodge slaying another giant. Westlake stunned Allen 23-17, which only added another chapter to Dodge’s Texas-sized legacy.

Much of his success is due to his mastery of the spread offense. He had time to perfect this offensive philosophy as a result of being one of its earliest adopters. According to Wixon, he “knew how to make it work as well as anyone.”

In August, Westlake lost its star quarterback, Sam Ehlinger, due to injury. The starting signal-caller was the reigning National Junior of the Year and an important cog in the team’s offensive output. However, Dodge has once again worked his magic and has his team poised to overcome the loss with another deep playoff run.

Westlake is 8-2 and in its last three games has outscored opponents 140-6. It won’t have an easy road to another Class 6A-I title game, but with Dodge at the helm, it’s impossible to count out Westlake.

Dodge is one several top high school football coaches who is scheduled to speak at the 2017 USA Football National Conference in January. To learn more about the conference, and to sign up to attend, click here.