Ask the Official: Does the clock always stop when a ball carrier goes out of bounds in the final minute of a game? 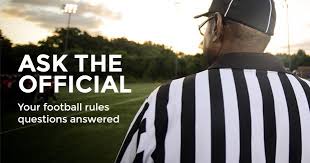 In a New Jersey playoff game, with time running out, the offense threw a pass toward the sideline to get into field goal range. The receiver caught the ball and was pushed out of bounds by the defender with the offensive player’s momentum going backward at the time.

The sideline official ruled that the offensive player’s forward momentum was stopped while inbounds, so the clock continued to run even though he went out of bounds. On the ensuing play with the offense in confusion, they spiked the ball on what was actually fourth down, thus turning the ball over to the other team, who could then kneel out the clock.

In the postgame press conference, the losing team’s head coach said the official “choked” under the pressure. That it was too big of a call for him in the moment, insinuating that he thought the receiver was going out of bounds on his own and the clock should have been stopped. What are your thoughts?

The rule under the NFHS rule book states that for a ball-carrier who is pushed or carried out of bounds:

If the ball-carrier is going forward or sideways, the clock stops until the following snap.

If the ball carrier's forward momentum is stopped and is going backward, the clock continues to run.

Looking at the video replay from the comfort of our own homes, it appears the receiver is pushed by the defender but goes out of bounds under his own momentum. The ruling in this case would be to stop the clock until the ensuing snap. When time is running out, give the benefit of the doubt to the offense and stop the clock unless the ball carrier's forward momentum is clearly stopped in bounds.

However, the official on the spot ruled otherwise, immediately signaling that the clock continue running. There was no hesitation, no delay. The players and coaches need to recognize this and react appropriately, knowing that it is fourth down, the clock is running and spiking the ball will result in a turnover on downs.

The coach and anyone else can disagree with the call on the field, but that is the call. Now, it is their job to adjust appropriately.