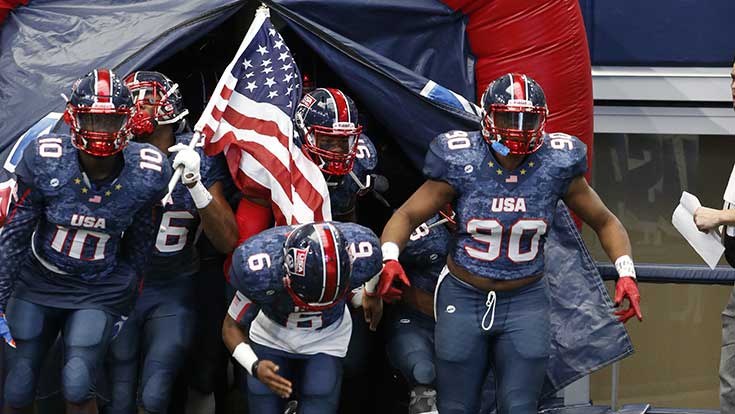 The city of Port Arthur, Texas, nestled along the Texas-Louisiana border near the Gulf of Mexico, is a dynamo of rich oil production and refineries. Port Arthur Memorial High School’s Kary Vincent Jr. is a gifted and refined cornerback gushing with talent. 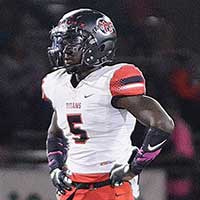 The 5-foot-10, 170-pounder has hauled in seven interceptions in nine games on the year, returning three for touchdowns.

Verbally committed to LSU, Vincent is the country’s No. 2-ranked high school cornerback by ESPN. A straight-A student who has received more than 30 scholarship offers, he’ll wear red, white and blue for the 2017 U.S. Under-19 National Team against Football Canada on Jan. 28 at the North American Championship in Orlando, Fla.

The future LSU Tiger was introduced to the U.S. National Team program by his former Memorial teammate and cousin Kameron Martin, a running back on the 2016 U.S. Under-19 team. Martin now plays for the No. 18-ranked Auburn Tigers as a true freshman.

“I watched his International Bowl game last year and he told me what a wonderful experience he had,” Vincent said. “I’m looking forward to it – it’s really exciting.”

Vincent’s athletic gifts run in the family. His position coach at Memorial (9-1) is his father, Kary Vincent, Sr. The elder Vincent was an accomplished wide receiver at Texas A&M, drafted by the New Orleans Saints in 1992.

“It’s definitely tough, but I don’t think I’d be here today without his guidance,” Vincent said of playing for his dad. “Some people think coaches’ sons have privileges – my dad’s always on me. It’s constructive criticism of course, but he’s always hard on me.”

Vincent’s skills and accomplishments in track are just as glowing as those in football. He's the defending Texas Division 6A (largest schools) state champion in the 200-meter dash, posting a blazing time of 21.09. He's been clocked as fast as 10.75 in the 100-meter dash.

“You’ve got to have a different mentality to run track,” said Vincent. “Track meets are easy. Track practice is the hardest part. The practice schedules we run are tough – not everyone can do it.”

In addition to playing cornerback, Vincent lines up at slot receiver and returns kicks for Memorial, and looks forward to facing Team Canada this coming January at the North American Championship.

“I’m willing to do whatever it takes to dominate my opponent and help my team win,” he said. “I never underestimate anyone. I expect a hard-fought game but I’m committed to have Team USA come out on top.”

Other players to watch: 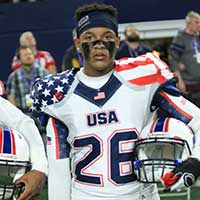 Safety Isaiah Humphries of Sachse (Texas) stands among the nation’s most highly-touted players at his position within his high school class, including a No. 2 ranking among all Class of 2018 safeties in Texas. The high school junior has received 13 scholarship offers, including current Top 25 programs Oklahoma (No. 8), Penn State (No. 9) and Colorado (No. 12). At 5-11 and 185 pounds, Humphries possesses the uncommon talent spectrum to play in the box and handle man coverage at elite levels. His 50 tackles and five interceptions have helped Sachse reach a perfect 11-0 record, including a 34-13 first-round playoff victory this past Friday against Skyline (Dallas). Humphries will be a formidable member of the U.S. Under-18 National Team when it faces Team Canada on Jan. 28 at the North American Championship in Orlando. 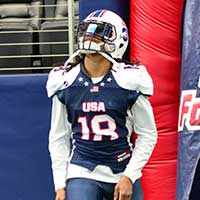 As a sophomore, 5-11, 160-pound cornerback Nyquee Hawkins of Orange (N.J.) already has a scholarship offer from Penn State – and there will be more to come. The rangy shut-down corner, who doubles as a receiver for Orange (6-4), enters his fourth season in USA Football’s National Team program. Hawkins continues to refine his game, which as a cornerback is strengthened by his receiver experience, helping him to anticipate routes and quickly identify when a route gets cut. Well-grounded with an even temperament, Hawkins lets his play speak for him. Team Japan receivers, along with the rest of the world, will get a close look at his coverage skills on Jan. 16 during International Bowl VIII at AT&T Stadium in Arlington, Texas. 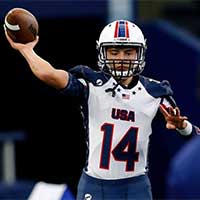 Quarterback Ken Seals is a rare freshman starting at his position on the varsity level. In his first season leading Azle (Texas), the 6-2, 175-pounder completed 134 of 298 passes for 1,860 yards and 14 TDs. With years to grow, the prototypical pro-style passer already delivers with a strong and smooth release, melded with an unflappable demeanor and high I.Q. for the sport. Seals and his fellow U.S. Under-16 National Team quarterbacks will benefit from playing for offensive-minded head coach Jason Mohns of Saguaro (Scottsdale, Ariz.), who has directed his program to three state championships in his four seasons. Seals resides a scant 36 miles northwest of AT&T Stadium, the world-class football venue hosting the Under-16 National Team’s game against Football Ontario on Jan. 17.