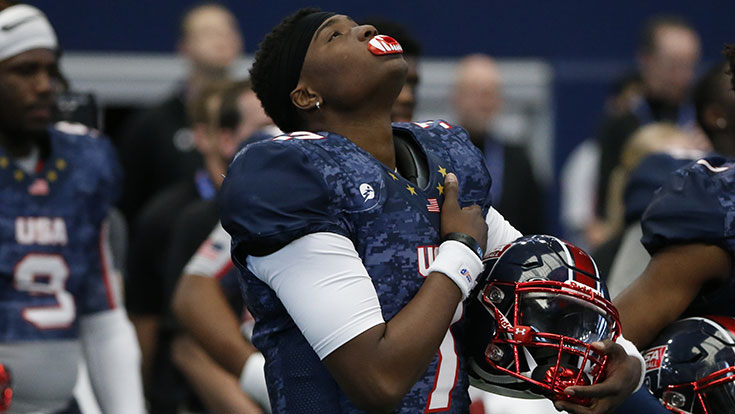 Top-of-the-line car models are built with an abundance of power and features, delivering an optimum driving experience. Not your everyday sedan, such vehicles demand an experienced driver.

Rich in smarts and skills, the U.S. squad features top football student-athletes in their senior year of high school that will face Team Canada on Jan. 28 in the North American Championship at ESPN’s Wide World of Sports Complex in Orlando, Fla.

“The kids playing on this team are selectively chosen,” said Sanchez. “They’re competitors and you have to be that way in football.”

In two seasons as the Gaels’ head coach, Sanchez has attained a 30-0 record, two Nevada state titles and USA Today’s Super 25 “national championship” in both 2015 and 2016. Bishop Gorman, which has won eight consecutive state titles, also finished No. 1 in the MaxPreps Xcellent 25 National Rankings. Prior to becoming the Gaels’ head coach in 2015, Sanchez was their defensive coordinator from 2009-14. He also is a dean of students at the school.

Sanchez and his Bishop Gorman staff, which will serve in the same capacity for the Under-19 National Team, will have four practice days to prepare for a formidable Canadian team. Canada defeated the U.S., 24-6, in the 2016 International Federation of American Football Under-19 World Championship in Harbin, China, this past July.

“You’ve really got to be a teacher that week,” Sanchez said. “We’ll have our team clearly understand what we want accomplished and let them play and have fun. We’ll need to grind, but it’ll also be fun and exciting.”

Leading the Americans holds personal significance for the U.S. head coach, whose brother, Joseph Sanchez, is a U.S. Army Staff Sergeant presently serving his third tour of duty in Iraq.

“We live in the greatest country on earth,” Sanchez added. “Any time that a coach or an athlete can represent the United States and wear ‘U.S.A.,’ it’s special.”

Play for your country and join the U.S. National Team family – the journey begins here.