Football is a family tradition for ESPN’s Mike Golic 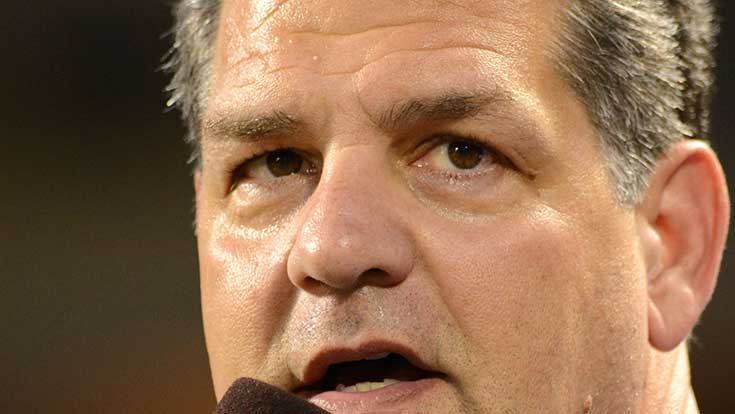 Football and family are intrinsically linked. Since its inception, the sport of football has been passed on from generation to generation.

History is loaded with football families that have left their marks on the game. Pro and college football would not be complete without the Mannings (Archie, Peyton and Eli) or the Matthews (Clay, Clay Jr., Clay III, Bruce, Casey, Kevin and Jake).

Another family to etch its name in the football history books is the Golics, which has seen three generations of athletes suit up for college and pro football teams. Starting in 1956 with Bob Golic Sr. lining up in the Canadian Football League, that lineage has carried on through his sons, Bob, Greg, and Mike – all of whom have made their mark on the game.

Mike Golic, the star of ESPN Radio’s weekday morning show Mike & Mike has been an ambassador for the game since his retirement in 1993. A nine-year NFL veteran and former University of Notre Dame captain, the man simply known as “Golic” to millions of listeners credits his successes to the strength of his family ties in the game.

“My brother Bob is 6 years older than me, and when he started playing little league football, my dad was one of the coaches, so I would watch them,” Golic said. “That was how I got introduced to football, and I knew as soon as I was old enough to try it that was something I wanted to do.”

Though Golic never saw his father play, he did follow his father’s example in life and the lessons he taught him about football to help him in his career. Golic also had the benefit of an older sibling to follow on the field – the played the same position of defensive tackle. More importantly, Bob showed Mike what not to do on and off the football field.

“My dad was a former Marine, and he was very old school in his approach,” Golic said. “He told us if you ever want to get anywhere in life, not just in football, then you work hard. If you have to make sacrifices, then you make sacrifices. This was even just in little league. Ultimately, my dad was a bricklayer. We were all swinging a hammer with him when we were 11 or 12 years old building steps and chimneys. We learned pretty early on the value of hard work.”

Golic’s hard work earned him a lengthy career with the Houston Oilers, Philadelphia Eagles and Miami Dolphins. Injuries ultimately curtailed his career, but he has thrived in his post-football life by applying those same lessons from his father and his brothers in everything he does.

“There’s no doubt I had an advantage in having a father and a brother who played the game,” Golic said. “My brother Greg, who as about a year and a half older than me, and I saw all of that, and it gave us in an advantage in knowing what to expect. Sometimes, you walk into a situation with some trepidation. Well, having a father and a brother who already had done it prepared us so we knew what would or could happen.”

Now, Golic gets to impart his football knowledge to his legions of devoted radio and television followers. Often playing the comic relief to Mike Greenberg's straight man, Golic offers serious and thoughtful insight behind his quick smile and hearty laugh - especially when he talks about the NFL, college football and the issues that impact the millions of American youth and high school players in the sport.

Golic also shares that football wisdom with his two younger sons, Mike Jr. and Jake. Both followed family tradition by attending the University of Notre Dame, with Jake currently playing out an injury-exemption at the University of Cincinnati and Mike following his father into pro football.

While it is admittedly nerve-wracking to see his sons competing on Saturdays and Sundays, it also is an extreme source of pride in seeing a third generation of Golics on the field.

“It’s very difficult to watch your kid play anything,” Golic said. “When you yourself play, you have a degree of control over the situation. Now, when you’re watching, you don’t have that control, so it is tougher. But there is a lot of pride there in just watching these kids go out and participate. They don’t have to be the best. I’m just proud of them that they’re going out there working. As they got older and wanted to pursue this more, I started working with them to improve and work to achieve their goals. When they eventually achieved everything they set out to do, as a parent there’s nothing like seeing your kids put in the work and do what they set out to do. Doing the things they needed to do, making the sacrifice they needed to make, it’s been incredible.”

Eric Moreno is a freelance writer based in San Antonio, Texas. He is a graduate of the University of Texas-San Antonio and a lifetime season ticket holder for UTSA Roadrunner football. In his free time, when not attending games, is an avid reader and traveler. Follow him on Twitter at @EricMoreno6477.