Under-19 National Team running back D’Andre Swift has bright future, thanks in part to support of his high school football coach 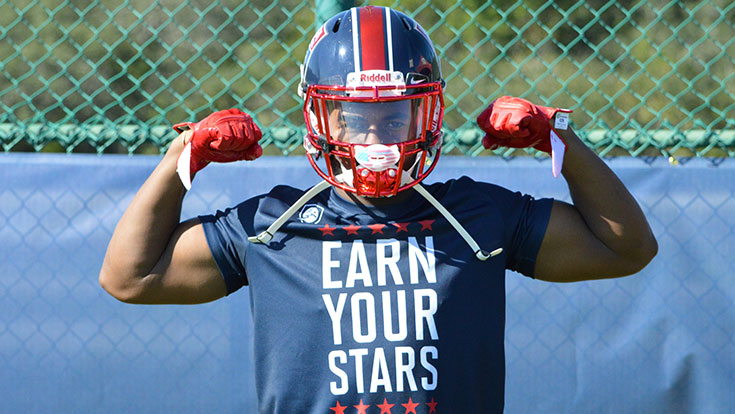 For many high school football players, a coach is not merely a coach, but also a mentor, teacher, friend and supporter.

D’Andre Swift, star running back at St. Joseph’s Prep (Philadelphia) and member of the U.S. Under-19 National Team, looks at his coach, Gabe Infante, as something even greater: a father figure.

Infante, a USA Football master trainer who guided St. Joseph’s Prep to a state title in the fall, has been a steady presence in Swift’s life for the last four years.

“He’s just a great all-around person,” Swift said this week in Orlando, Fla., as he prepares to play in Saturday’s North American Championship. “He’s always been there for me, good or bad. If I made a bad decision or needed help in school. He was there for me.”

Together, Swift and Infante have achieved tremendous success. In addition to the title in 2016, St. Joseph’s Prep also won state championships in 2014 and 2013, when Swift was a mere freshman playing varsity football at one of the country’s top programs.

Now, Swift’s high school career will culminate by strapping up the pads once more, for the U.S. National Team, when he and his Under-19 teammates will face Canada.

The week has been an educational one for Swift, as he’s been soaking in the lessons taught by head coach Kenny Sanchez and his staff of assistant coaches, all from Bishop Gorman (Las Vegas).

“It’s been a great experience, especially getting to be coached by one of the greatest staffs in the country,” he said. “I’ve learned a lot since I’ve been here. It’s been great to play for a coaching staff like that.”

After the North American Championship, the next step in Swift’s football journey will take him to Georgia, he’s expecting to compete for playing time as a true freshman.

Endowed with talent, molded by a supportive high school coach and shaped by his time with the U.S. National Team, there’s no ceiling to Swift’s future.