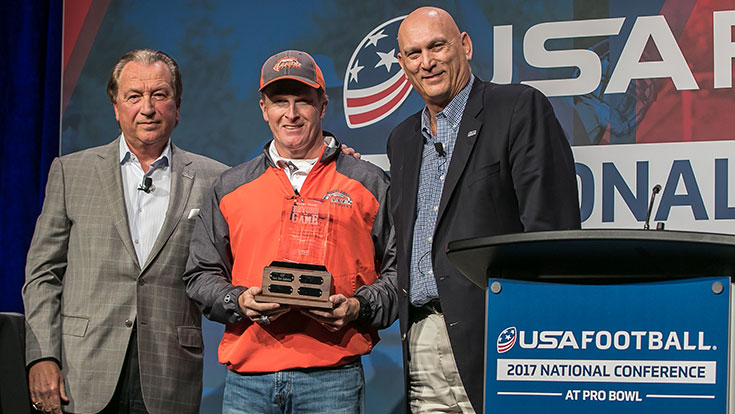 You want a longtime NFL general manager? Or what about a Super Bowl champion head coach and one of his starting offensive linemen from that game?

How about a former chief of staff of the U.S. Army?

Hundreds of high school athletic directors, administrators and, of course, coaches, gathered alongside youth football leaders from across the country and were treated to all of that — and then some — Friday afternoon to officially kick off USA Football’s fourth annual National Conference.

The presentations from former Kansas City Chiefs general manager Carl Peterson, former Tampa Bay Buccaneers head coach and current ESPN analyst Jon Gruden and former Buccaneers lineman Roman Oben, as well as General Raymond Odierno, on Friday were just the start of a jam-packed weekend of events for those in attendance, who will spend the next couple days getting an exclusive opportunity to take their coaching development and respective programs to the highest level possible.

“In my view, what truly makes football special and different is you — the coaches,” USA Football CEO Scott Hallenbeck told those in attendance at the Orange County Convention Center in Orlando, Fla.

Peterson says goodbye
Carl Peterson, a former coach at UCLA and with the Philadelphia Eagles who served as CEO, President and general manager with the Kansas City Chiefs from 1989 to 2008, was named USA Football’s chairman in 2009. Since that time, the organization has grown tremendously as the game’s national governing body.

Peterson officially retired from his position on Friday, handing over the reigns to Odierno, whose chairmanship was also approved by the board earlier in the day.

“Believe me — it has been a wonderful ride,” Peterson said in Friday’s opening remarks. “Before my long career in professional football, I sat in the same seat that you’re sitting in today. I was a high school football coach just like you.

“My point is that you all play such an important part as a football coach and particularly in each of those young lives that you touch,” Peterson said. “Believe me — they will never forget you.”

The General
Raymond Odierno couldn’t imagine his life without football.

The retired U.S. Army general and former Army Chief of Staff from 2011 to 2015 has certainly led a life of service and sacrifice, and believes many of those qualities were instilled in him from a young age while on the football fields growing up in Rockaway, N.J.

Whether it was catching a key touchdown pass over a rival high school or leading troops in the capture of Saddam Hussein in Iraq, Odierno believes both require a great amount of physical and mental toughness, as well as a belief in good old fashioned teamwork.

Odierno, who was formally introduced as the new chairman of USA Football on Friday, told those in attendance at his keynote address that he believes football is the “centerpiece of the American spirit.”

“The one thing we all have in common in this room is we all love this great game of football,” Odierno said. “So it’s important as we get together that we really think through that and think what is the future of football? …. With us together, I believe that football will continue to prosper in this great, great country of ours.”

Odierno comes in at a critical time for USA Football, which is using its fourth-annual conference to convene football leaders, learn from each other, build trust and map the game’s collective path forward, especially at the youth level.

In doing so, as Hallenbeck alluded to in his keynote presentation, the organization believes it’s time to include a bridge between flag and 11-person tackle to allow players to progress at the right age and stage.

Odierno said he’s excited to get to work to help continue to provide professional development and educational opportunities to the game’s coaches at all levels.

“I challenge everyone here to be part of a new wave of encouraging and talking about football, and what it brings to the local community and what it means to our nation — a smarter, safer game with the same competitive spirit which we have come to love about this game,” he said. “I ensure you as chairman of USA Football we will be dedicated to working with everyone … to do what’s necessary to promote this great game. No one can do it alone. No one.”

Grant Teaff Award winner
Next up on the docket was Chris Stephenson, the head football coach at Mr. Dora High School in Mt. Dora, Fla., the recipient of the 2017 Grant Teaff Award, which is given to a coach or football official who makes a lasting impact on and off the field, as well as in their community.

Stephenson said the pride at his school “was gone” when he had arrived as the fourth head coach in four years.

“You know, when you have that much of a coaching turnover, it’s hard for (the pride) to come back,” he said. “And we’ve worked hard, and worked hard.”

Stephenson’s approach to coaching and the game of football has since been an inspiration, creating a new atmosphere around his program — one which involves the entire community.

“A true godsend!” one Mr. Dora parent wrote about Stephenson. “He was just what we needed to get our school, team and community back in the game.”

Wins and losses are important, but to Stephenson, he knows the true meaning of being a well-rounded coach.

“Everybody thinks football is all about your practice field or your weight room even, what it’s about to me is building a young man,” he said. “It’s not so much of winning football games — that’s the perks to all this — but it’s making an absolute model student, model person and a model athlete. That’s the blessing of our sport.”

Congratulations to Stephenson and his staff for this incredible accomplishment.

One of the game’s most passionate ambassadors is none other than Jon Gruden, who had a very successful career as a coach in the NFL before starring in his current role as an analyst and Monday Night Football color man on ESPN.

And, as expected, Gruden had some entertaining — not to mention educational — remarks for those in attendance on Friday.

In his presentation, “The Greatest Game,” the Super Bowl XXXVII champion who had a 100-85 record with five division titles in his 11 years as a head coach in the NFL, said he knows what youth coaches, from the flag football leagues through high school, are facing in today’s environment.

And although “the job is getting bigger and tougher every single day … great things can happen,” Gruden told the crowd. “But we can fight together and we can have a lot of success together if you just stay with us.”

After all, Gruden said, “it’s up to you people to bond together to keep this football coaching fraternity strong.”

“We’ve got to support one another. We’ve got to help each other … there is strength in numbers,” Gruden finished. “I challenge you young coaches to find a veteran coach and seek knowledge, seek wisdom, learn the game … open your arms to these young guys and teach them the game.”

Back in 2002, he was the starting left tackle for those Super Bowl XXXVI champion Buccaneers, and he’s since used those experiences — which included 12 NFL seasons in all — in his current role as the NFL’s Director of Youth & High School Football.

After not playing football until high school, when he came over to the U.S. from Cameroon, Oben said he had to forge his mother’s signature to ultimately get onto a football field for the first time. When his plans were exposed after his mom received a call shortly thereafter asking if she would help volunteer to work the concession stand at football games, she told her son, “Your grades better not mess up and you better not get in trouble.”

Her blessing has certainly paid off for Oben.

“Thank you mom for letting me play football,” he said.

Oben said he was excited to help kick off the largest annual gathering of high school and youth football stakeholders in the country on Friday in Orlando. He remembers the impact his own coaches have had not only in his football career, but in his personal life, and recalled the message from Pro Football Hall of Fame President David Baker in last year’s USA Football National Conference.

With so many awesome sessions and speakers scheduled for the rest of the weekend — not to mention the chance to attend Sunday night’s Pro Bowl game, which is also in Orlando — Oben encouraged those in attendance to make sure they take advantage of the opportunity to collaborate and network to help improve their own programs.

“Take it all in,” he said. “Soak it all in, gentlemen, ladies, just get as much resources as you can … (and) thank you, thank you from the bottom of my heart. … Thank you all for all you do for your families and your communities, and thank your wives and husbands as well.”