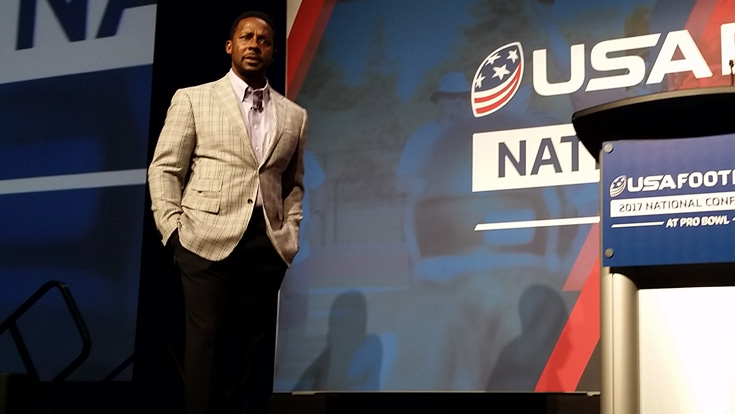 Throughout Desmond Howard’s football career, he’s been privileged to play for multiple Hall-of-Fame-level coaches, each of whom brought their own style and approach to the game, as well as to the player-coach relationship.

And even now in his role as an analyst with ESPN, Howard continues to travel the country and interacts with some of the best coaches the game have to offer — some well-known, some not — but he emphasized just how critical a coach can be to the develop of his or her players, no matter what level.

“I know how important it is what you guys do as coaches for our youth,” Howard said.

Howard was a featured speaker at USA Football’s 2017 National Conference At Pro Bowl, where he told a room packed full of hundreds of football coaches, athletic directors, school administrators and other key youth football stakeholders that one of the first thing he asks various college coaches throughout the year is, “Do you teach toughness, or do you recruit toughness?”

Toughness, Howard said, was so important to his upbringing — in and out of football — that it was just second nature by the time he was winning college football’s top individual honor, or even setting Super Bowl records.

“And you get various answers,” said Howard, a former USA Football board member. “Certain coaches, their personality is going to rub off on their team. And they’re going to demand it.”

Howard, of course, gained national notoriety at a relatively early age, especially after the Michigan product struck the Heisman pose after scoring a touchdown against rival Ohio State during the 1991 season.

A standout kick and punt returner, as well as a wide receiver, Howard would end up winning the trophy featuring that same pose later that year, and he was considered one of the top prospects in the upcoming NFL Draft.

The defending Super Bowl champion Washington Redskins, led by their Hall of Fame head coach, Gibbs, took Howard with the fourth-overall pick in the 1992 NFL Draft, and he would ultimately play 11 years in the NFL, primarily as a return weapon for the Redskins, Jacksonville Jaguars, Green Bay Packers, Oakland Raiders and Detroit Lions.

It was with the Packers in 1996 that Howard had the best performance of his professional career, returning 58 punts for an NFL single-reason record 875 yards (15.1 yards per return) with three return touchdowns, while also returning 22 kickoffs for 460 yards.

But Howard said long before his standout performance on the biggest stage there in sports, his upbringing through the game of football, and the coaches he developed under, left a lasting impact and set up his success in the college and professional ranks.

It started with his father, J.D., whom Desmond said “gave me the foundation, and that foundation was already set, was already laid” when he began playing organized football — one that included hard work, an incredible work ethic, discipline and tough love.

At the youth level, Howard said his coaches in the Cleveland area, which included Nate Clark and Bruce Walker, made practices so intense, so hard, that “by the time we got to the games, the games, you know, they were fun. We enjoyed them. We were prepared. We felt like we were the best-conditioned team on the field.”

Howard said he was lucky to have also played for one of the greatest high school football coaches ever in the state of Ohio, Gutbrod, who compiled a 268-107-17 record in 40 years at St. Joesph’s high school.

Gutbrod, Howard said with a laugh, “was kind of crazy,” but he thrived under his old-school approach, and was a “great leader of men.”

“He was a great leader of men because he had the ability to get out of us that which we didn’t know was even inside of us,” Howard said. “And that’s what great leaders do. That’s what great coaches do. They’re able to see in these young athletes something that they don’t even see in themselves, and they’re able to pull it out of them, make sure they hit their potential where these kids didn’t even see where their potentials were.”

For Howard, as he advanced in his football career to the highest level of the game, he said one theme was persistent whenever he thought about the great coaches that had come and gone in his life.

“Football has been so good to me,” Howard said. “I’ve been so blessed to not only have played this sport, but to have been around some giants in this sport.”