Jerome Bettis and Ray Lewis chat about their football upbringings 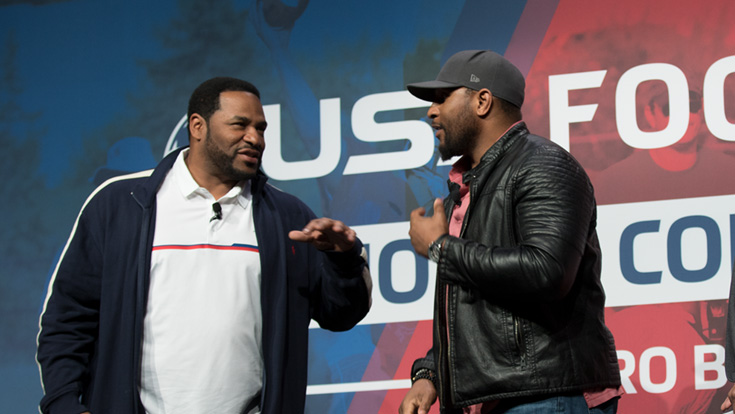 “Usually a Raven and a Steeler don’t sit this close.”

Even years after they retired from the game of football, Jerome Bettis and Ray Lewis still are able to get back to their longtime AFC North Division rivalry — even if it’s just in jest.

The two legendary football players took part in a sitdown Q&A-styled interview on Saturday at USA Football’s National Conference at Pro Bowl in Orlando, Fla., where a standing-room-only crowd of youth and high school coaches, athletic directors, school administrators and other key youth football stakeholders from across the country have been treated to an exclusive opportunity to network and mingle with their peers and continue to grow the greatest game there is.

Hosted by Fox Sports 1’s Mike Hill, the conversation between Bettis and Lewis really gave those in attendance a unique look into what it took for them to become the Hall of Fame-caliber players they developed into, but perhaps more importantly, what lessons they took from their coaches that they still apply to their everyday lives today.

Bettis, known affectionately as “The Bus” during his 13-year NFL career with the Los Angeles Rams and the Pittsburgh Steelers, actually didn’t play a down of organized football until his freshman year in high school.

He said it took a while, but thanks to the coaches who were willing to put in the time to work with him, he got “reigned in” and really began to understand the game.

And it was his coach who convinced him to focus on running back, despite the fact he was an All-American high school linebacker.

“I could have took your job, but … I was too short,” the 5-foot-11 Bettis, who went on to star at Notre Dame, told Lewis. “So I figured it was better for me to play running back than it was for me to play linebacker.”

Lewis, meanwhile, said he used his high school football experience to try to soak in every bit of knowledge — both on and off the field — that he could from his coaches.

As a sophomore strong safety, Lewis had a senior starting ahead of him on the varsity squad. The week before the team’s first game of the season, however, Lewis was sitting in a team meeting when his coach told him, “You’re starting this week.”

“And I said, ‘I’m starting what?’ ‘You’re starting the game this Friday.’”

As it turned out, the player ahead of Lewis had broken his jaw. You know how the rest of his story plays out.

“I never really earned the coach’s respect enough to earn the job. Somebody always got hurt in front -of me,” Lewis said with a laugh. “The moral of my life has always been, ‘Don’t lose your job around me.’”

But because he grew up without a father in his life, Lewis said he craved that special relationship that can develop between player and coach. Soon, he was mimicking all kinds of personality and physical traits that his coaches displayed: how they walked, talked, dealt with others, the respect they had for those around them.

“Every coach I ever had I took so much from them that they never knew I took from them,” Lewis said. “And we were affectionate. Like, man, that man would touch me, like, ‘Good job, baby!’ And that was enough right there to take me over the edge and have me come back and do whatever I wanted to do.”

After a Hall of Fame NFL career that included 3,479 carries for 13,662 yards and 91 touchdowns — one that ended with the very highest of highs with a Super Bowl title — Bettis said he’s gained a new appreciation for coaches as he leads his son’s 9-year-old basketball team.

He said being clear, as well as being realistic, which every student-athlete — even from a young age — is something he’s learned is very important as a coach.

“I think clarity is the key in terms of explaining (to) everyone what your expectation of every player is, so now every player is on the same page,” Bettis said. “As a coach it’s hard to coach 10 guys and work on everybody’s deficiencies during the course of a practice. But if you give every kid an understanding of, ‘Hey we’re a team; here’s what you can work on,’ … then you can manage their expectations.”

Lewis — a soon-to-be Hall of Famer — is, of course, considered one of the greatest linebackers of his era. With his children having participated in athletics at the high school or club level, he said the more “old-school” approach that shaped him into such an elite player in his younger years still should be the standard today.

After all, Lewis had no choice but to earn and and learn it when he got to the NFL. With guys like Bettis and the Bengals' Corey Dillon bearing down on him on a weekly basis, the quick-but-undersized Lewis said he had to make adjustments.

"These guys made me kind of change my game and get into the weight room and think about being more physical. It was the mindset of pure physicality, so for me, my game started to evolve every year to change weights.

The respect was mutual for Bettis, who said Lewis changed the game at the middle linebacker position.

"When I saw him I realized it was a different type of athlete … This one here, he was just sideline to sideline. I could never get away from him," Bettis said. "You get to the hole, next thing it’s, ‘Boom!’ It’s like, ‘What was that?’ He changed the game as far as speed."