Brian Billick: ‘The more of this you do, the better’ 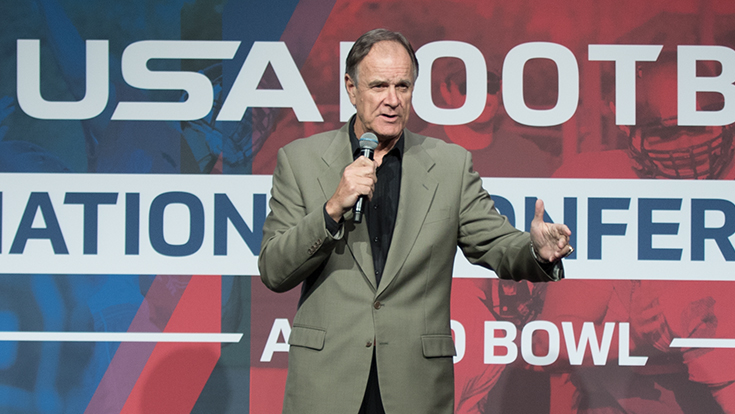 Good coaches are, of course, solid game managers on the playing field.

But history has proven time and time again that the best coaches are also talented teachers, able to develop a gameplan and effectively parlay it to their players, as well as effective leaders, walking the walk and talking the talk of success — however it’s measured.

Brian Billick was able to find the right balance between game and practice management, quality teaching and effective leadership in his longtime football coaching career, which was highlighted by his Baltimore Ravens’ victory in Super Bowl XXXV.

Billick was the featured speaker late Saturday afternoon at USA Football’s National Conference At Pro Bowl in Orlando, Fla., where he certainly had the attention of the hundreds of youth and high school coaches, athletic directors, school administrators and other key youth football stakeholders in attendance.

Billick’s coaching career began in 1977, when he would split his days between being an assistant coach at Redlands (Calif.) High School and being a volunteer assistant at NAIA University of Redlands.

He certainly paid his dues, not only with those roles, but when he went to his alma mater, Brigham Young University, as a grad assistant the next year, and then, after a three-year absence, became the tight ends coach at San Diego State.

From there, Billick’s talents were really coming to the surface. He was named offensive coordinator at Utah State in 1986, became an assistant head coach at Stanford in 1989, and got his first NFL gig with the Minnesota Vikings as their tight ends coach in 1992.

Just two years later, Billick was promoted to be the Vikings’ offensive coordinator, and after four seasons, he was named the Baltimore Ravens’ head coach.

Eighty wins and a Super Bowl trophy later, and Billick had achieved all of his dreams.

Throughout his career, Billick — who has since gone into broadcasting and writing for the NFL Network and NFL.com — said he’s been very fortunate to have learned from several great coaches — perhaps most notably, Bill Walsh and Dennis Greene — and, not surprisingly, Billick’s own coaching tree is quite impressive.

Those assistants who have coached under Billick include Jack Del Rio, John Fassel, Marvin Lewis, Mike Pettine, Rex Ryan, Mike Singletary and Mike Smith, among many others.

Billick said the best lesson he learned from Walsh was to “make sure that every hour you spend designing or learning or dissecting a play, you spend that same amount of time, another hour, perfecting how you’re going to teach it, how you’re going to communicate it.” He said he tried to pass along similar lessons to his assistants, as well.

Among the other tips Billick had for the youth and high school coaches on Saturday was that, in his experience, he knew the players that felt confident enough to freelance at times weren’t necessarily bad apples in many cases.

He gave an example of one quarterback who had practiced and practiced a certain play the week prior to the game, but on Sunday, when that play was called, he went to a completely different receiver than the play called for. The play resulted in a long touchdown, however.

“I asked him why he threw to that receiver,” Billick said. “He said, ‘He was open.’

Billick also praised the coaches and football stakeholders who attended this weekend’s conference in Orlando, telling them it’s obvious that they’re doing whatever they can to try to keep their programs the best they can be.

“The more of this you do, the better, because you learn something every time you do it,” Billick said.