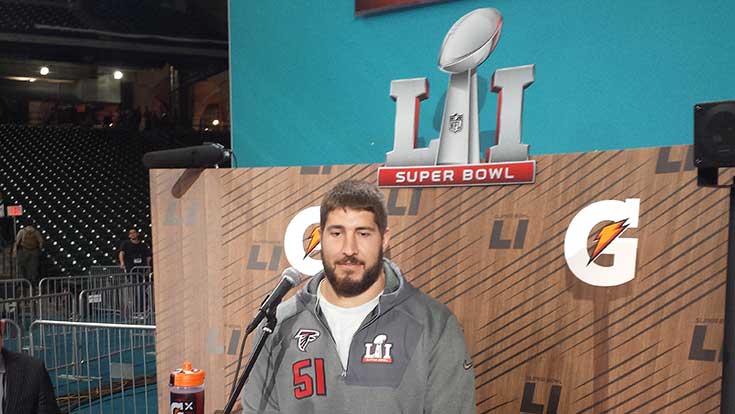 When Alex Mack came into the NFL as a first-round draft pick in 2009, there was no way he could have predicted the ups and downs his pro football career would take.

The former California Golden Bear was a two-time Morris Trophy winner and the recipient of the Draddy Trophy before being taken with the 21st pick by the Cleveland Browns.

For the next seven tumultuous seasons, Mack was the centerpiece of Cleveland's offensive line. Three times, Mack was named to the Pro Bowl in Cleveland, but the team never once made the playoffs or finished with a record above .500.

Something that is rarely taught to athletes is how to deal with persistent losing. Football is a great life educator in that it teaches you to get back up after a loss. It teaches you to fight on. However, when despite all your best efforts, you are unable to turn the losing into winning, it would only be natural to start giving up.

“Early in your career, you're excited about one day having a chance to [play in a Super Bowl], but pro football is tough,” Mack said, speaking at Super Bowl LI Media Night. “It's tough to win games in this league. My time in Cleveland, we were just trying have a winning season.”

Compounding the frustration of losing was also the added turmoil of dealing with injuries. Incredibly, in 2011, Mack played through an appendectomy during the season. However, in 2014, a broken leg would force him to miss a game for the first time in his playing career. He never let the adversity get him down and now his dogged perseverance has paid off.

After signing as a free agent at the beginning of the 2016 season, he is now the starting center for the NFC champion Atlanta Falcons.

“I know it is really tough to make it to the Super Bowl,” he said. “I know it takes a lot of guys have to play really well together to make that happen. It's been really exciting to be on this stage so quickly. I knew we had a good team here in Atlanta when I joined. To be here on the big stage is really exciting and I'm happy to be here.”

Looking back on everything that he has been through, Mack is confident that he appreciates the opportunity for the chance to become a champion more than he would have had he not been tested. The cliché says that everything happens for a reason. This is often doubly true when it comes to the game of football.

“It's been a long hard road to get here to this stage,” he said. “The more adversity you faced in your previous seasons, it teaches you how tight games can be. I think you can use those lessons as an opportunity to grow as a player. You have to keep working hard.”

Eric Moreno is a freelance writer based in San Antonio, Texas. He is a graduate of the University of Texas-San Antonio and a lifetime season ticket holder for UTSA Roadrunner football. In his free time, when not attending games, is an avid reader and traveler. Follow him on Twitter at @EricMoreno6477.