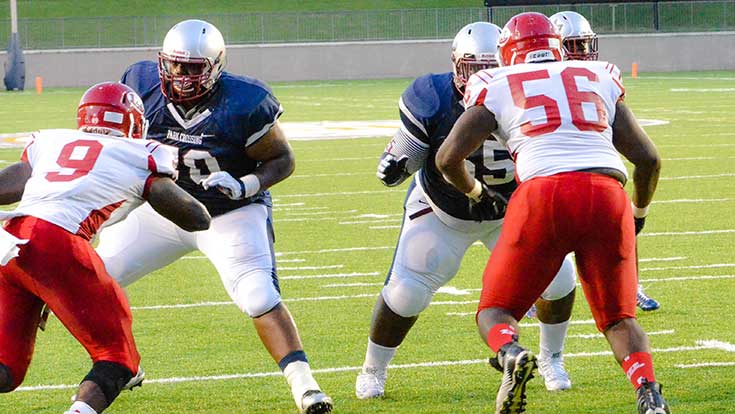 Having a grading and feedback system for your players is important for both their learning and motivation.

Retired college coach Tony DeMeo recently shared his “Four Aces” system of player grading with me. This is a system he utilized with all positions over the course of his career, and it offers a thorough evaluation system for the offensive line. ACES is an acronym that stands for the following:

The first ace is “Awareness.”  Did you do do your assignment?  If he did not do his assignment the player gets a minus “A” grade.

The second ace is “Concentration.”  Did you use the right technique?  Did you do what the coaches taught you.  If you do something different, it’s not going to help us against the best on our schedule.

The third ace is “Effort.”  Coach DeMeo wants to measure effort, so every position on the team has ten ways to get effort points. Desired behavior is given a point. A running total of this ace is kept throughout the season and the top player receives a plaque at the end of the season.

In addition, the top effort point earner each game receives a t-shirt.  Coach DeMeo keeps a bar graph of totals and the goal is for every player to be peaking at the end of the season and to be able to see an upward trend in effort.  Here are the ten ways the offensive line can gain an effort point.

Coach DeMeo teachers each of these effort points by getting them on film and sharing them with the players.

The last ace is Synergy. What is your intent?  Is it for the good of the team?  Are you adding or taking away. For example, a penalty is a minus “S.” On the other hand, not retaliating with an opponent  is an “S+.”

This system creates a process for improving every week throughout the season. Players constantly work to improve their grades and are motivated to gain positive effort points.