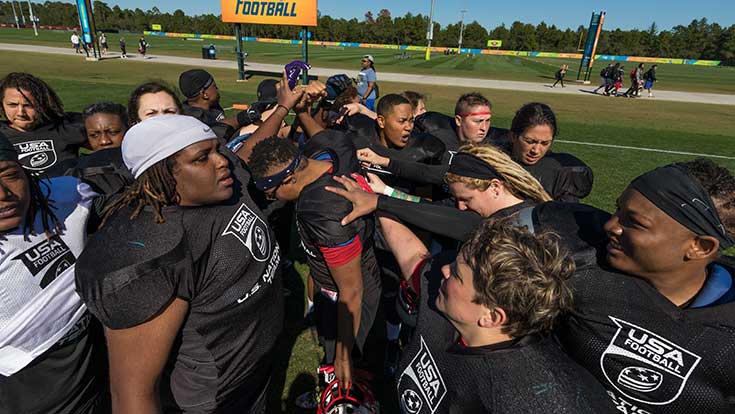 Some received an introduction to the sport through flag football. Others got their start through powder puff football. At least one became fascinated with it after watching “Friday Night Lights.”

Women with a diverse set of football backgrounds descended on Orlando, Fla. from across the globe last month as part of the 2017 Women’s World Football Games.

They shared a common theme: a passion to play the sport at its highest level.

The collection of some of the sport’s top female players featured 220 athletes from 20 countries. Practices took place throughout the week at the ESPN Wide World of Sports, culminating in a set of three intra-squad games on Saturday.

Each player wore a matching jersey, with a helmet bearing a flag from her native country. That juxtaposition was a powerful symbol of the unifying power of the sport.

“We speak different languages,” said Elise Aubourg, a defensive end from Florida, “but the one language we all speak is football.”

The week-long experience provided an education on multiple fronts. In addition to the techniques and skills the players absorbed on the field, they also received the chance to develop professionally off the field, courtesy of the Women’s Careers in Football Forum.

Organized by Samantha Rapoport of the NFL, the event brought together the likes of Bills owner Kim Pegula and former Dolphins executive Dawn Aponte to discuss ways women can get involved in careers in football scouting and operations.

But it’s on the field where the women really shined at the Women’s World Football Games. During the games on Saturday, a crowd of observer swelled around the field, watching and cheering like they would a game featuring the players’ male counterparts.

Being able to play an 11-on-11 football game with women across the globe was a powerful experience for the participants.

“I just love it,” said Sylvie Aibeche of France. “Being on the field is the only time where I live for the moment. I don’t think about anything else.”

See the links below for additional coverage from throughout the week: