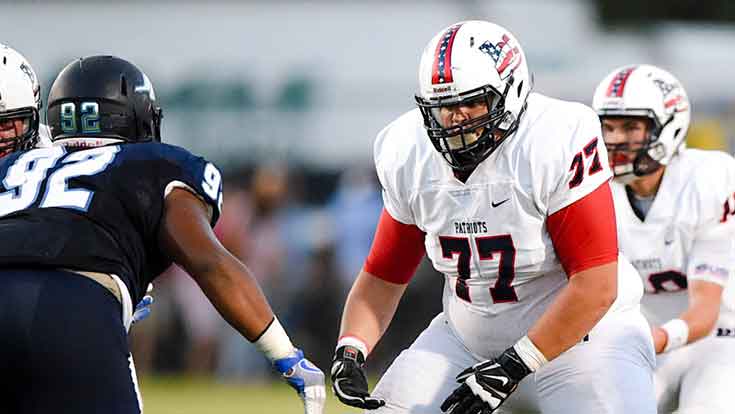 Alercio believes in coaching the offensive line as the head coach. It has something he has done as an assistant, coordinator, and head coach. He attributes offensive success to the five interior players. He also believes that the group must work nearly year-round to develop the communication and chemistry that they need for game day excellence.

To do this, Alercio has developed an offseason, offensive line mental conditioning program. For Alercio, this breaks down into three areas: footwork, fit, and communication.

Alercio began utilizing this system because he found that there was little continuity when the player has five months off before they perform their skills again.

“There’s no carryover,” Alercio said.  “The player will think, ‘I remember we did something like this,’ but it doesn’t have the effect of doing it with regularity.”

The setup of these sessions is relatively simple, and the linemen can do it in a relatively small space using chairs as the defense.

Alercio gives the center the responsibility of setting these sessions up and moving the rest of the unit through.

The center will be responsible for changing the fronts and always makes the first call. The other linemen work on their communication and on cadence. They will step to their assignments.

This does not have to be a full speed drill. The emphasis is on the communication and mental work of assignment, correct steps, and fit to where the block belongs.

Alercio offered these tips for a successful mental conditioning session:

Alercio feels that this is a good bridge from the beginning of the offseason to the spring.  Following the spring, the coaches are allowed to do more work with the players, and this carries into the summer.

The work then begins to become more physical, but a solid foundation of mental understanding has been established.

Coach Alercio is speaking around the country at the Glazier Clinics, and he has his one day OL Clinic on Sunday March 26, 2017 at the Hun School in Princeton, NJ.