Building an offensive line: Learning the clog to prevail in stalemates 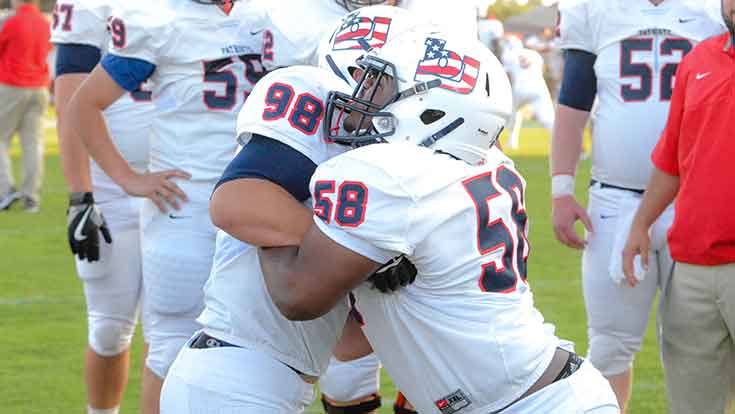 In my younger days as a coach, I believed all offensive line play was about effort and strength.  If my lineman was giving more effort and/or was stronger, he could win the block that temporarily turned into a stalemate.

To me, it was about who was driving harder or who was stronger.

As I’ve grown to understand more about technique and leverage, my understanding has blossomed to include more technical aspects of winning in this situation.

I certainly will not discount effort and strength, but offensive line experts John Strollo, Jim McNally, and Scott Peters talk frequently about torque and momentum. Peters has developed a technique which he calls “the clog.” It addresses the idea of driving the feet harder to overcome the standstill and move the defender out of the hole.

Peters touched on this technique with me and noted, “Stalemates are common, especially on the line of scrimmage, and the traditional idea I've heard from coaches is to ‘keep driving’ your feet. This approach is less than optimal and yields less than optimal results because driving the feet means one foot is inevitably in front of the other, compromising the base which creates instability and disables the hips.”

To combat this, Peters developed a clog technique that adds an additional force to the stalemate, allowing offensive players to load a defender and lift him from a stalled position.

Peters explained the approach this way:

As always, we are strongest with both feet behind us and the hands in front of us. This allows for the optimal transfer of force and enables us to deflect opposing forces with the feet grounded via lift or a lateral torque. I created the "clog" technique after training with Olympic wrestlers. I noticed how one of the guys was defending a collar tie with a dip of the elbow. I took this a step further with a lift-torque addition to meet football objectives and I've had many coaches, especially NFL coaches, tell me they teach this to players. The clog is somewhat of an advanced technique, but it is an easy addition once players have developed their base blocking skills.

Here's how to learn the clog technique: From a neutral fit (even base, one hand on chest player, one hand on shoulder), once the opposing player tries to refit, the offensive lineman should rotate his elbow to that side down and in. He should close the distance with a short step bringing his hip to his elbow. From this position, the offensive lineman now has the leverage to lift. The elbow should stay on the iliac crest of the hip, and the player should lift with an arc of the hips, but should not press or extend arms.  The hips should do the work.

Too many times as coaches, we correct technique with over simplified coaching points. To be yelling “Drive! Drive! Drive!” doesn’t give the player the information he needs to win. Rarely is effort the culprit. Rather, it is a lack of understanding or instruction on how to be successful in a certain scenario.

As coaches, the offseason research we do is critical to improving our understanding and methods as coaches so that our players can be successful in the fall. Scott Peters’ “clog” technique is a prime example of the details we can add to help our players win.