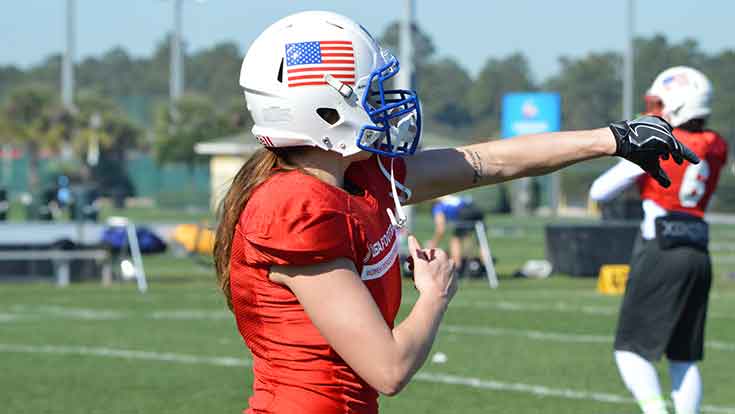 The U.S. National Team is targeting its third consecutive gold medal at the International Federation of American Football (IFAF) Women’s World Championship — and it has a talented new roster assembled to pursue the task.

The defending champions will field a deep, experienced squad for the 2017 IFAF Women’s World Championship, which will take place in British Columbia, Canada from June 24-30.

Twelve players — including quarterback Sami Grisafe — return from the 2013 team that took home gold in Finland. Quarterback Lisa Horton and receiver Liz Sowers are back representing the U.S. after participating in the 2016 IFAF Flag Football World Championships.

Jim Farrell will serve as the team’s head coach. He’s excited to work with such a gifted group of athletes.

“This is truly a remarkable group of talented women that we have representing the U.S. National Team,” Farrell said. “Our team is a solid mix of youth and experience. We have young players looking to prove they belong and experienced veteran leadership that set the standard of how the game needs to be played at their positions.”

Farrell recognizes that in addition to representing their country, the team’s players will continue to contribute to the growth of the sport among women internationally.

“Their passion, commitment and skill level is influencing women's football all over this country during their respective spring seasons,” he said. “They will continue to inspire the next generation of women's football players this summer in Canada fighting for a gold medal."