The 4 stages of program building 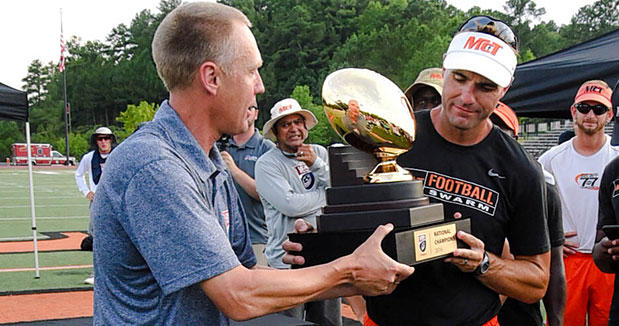 After an early season loss to Marshall during his first head coaching job at a then down-and-out Bowling Green program in 2001, coach Urban Meyer called his former mentor and head coach at Notre Dame, Lou Holtz for some advice. Holtz laid out four stages to building a championship program to the young head coach.

As we approach the midpoint of the season, it may be a good time to reference these stages as you assess where your program is at.

The four stages are:

Let’s examine each of these in more detail.

Learning how to compete

This involves being intentional or purposeful in your approach. It means playing for a cause greater than yourself. As the leader of your program you should always have a vision for your organization, but it’s equally important to share that vision with your team—and share it often.

Remind your team each day what your cause is. What are you playing for? Why are you putting in all this work? Your cause should transcend wins and losses.

I’ve never believed in setting win-loss goals. After all, if you lose a few games, then what else is there to play for? Instead, if you base your goals in something greater than wins, then goals are always in front of you. You always have motivation to continue to grow, no matter how many games you lose early on.

For example, a great goal might be to “Reach our fullest potential in football and ultimately in life” or "Create an environment of excellence in everything we do - on and off the field."

According to Nick Saban, these were the team goals of 2003 national champion LSU Tigers as laid out by their senior leaders:

Nothing above says anything about wins and losses, does it?

Learning how to compete also involves being powerful. To do this you must play and practice with passion. Football is an intense game. Think of passion as the rocket fuel that allows you to play with power, but also enables you to keep going through the many ups and downs of a practice, game or season.

Learning how to win

There are a lot of things that go into winning. At its core, success can be found at the intersection of preparedness and opportunity. So let’s begin there.

First, winning means developing the habits of preparing to win. For athletes, this begins with preparing themselves in the offseason.

One local high school program has a mantra written on the wall of it’s weight room to remind athletes of this simple lesson: “All men are created equal… some just work harder in the off season.”

It’s true. You can’t just show up in August and expect to be a good football player or team. Additionally, in-season winning habits require learning how to prepare throughout the week both as a person and as an athlete.

This includes taking care of your body and mind with proper rest, handling academics and mental preparation for games. Learning how to win also requires knowing how to avoid drama and distractions.

If you are living a disciplined life by doing the things outlined above, then you’ll be able to conduct yourself with discipline on Friday night.

Discipline on the football field manifests itself in taking care of the football, winning the turnover battle, managing the clock, eliminating or minimizing costly penalties, playing fundamentally sound football for four quarters and finishing opponents when you have early leads.

The primary component of learning how to win is developing discipline. Above everything else, football is a sport of discipline.

I am always astounded how many football teams lack this critical aspect. Discipline doesn’t start when the ball is kicked off. It starts in our personal lives, in the classroom, in the dining room and in meetings. It begins with how we manage ourselves on a daily basis.

I served as an assistant at West Valley High School in Northern California, which is a small school that is also a perennial football powerhouse.

I marveled at head coach Greg Grandell's ability to monitor the discipline his players were exhibiting in school or at home. He contended that “you can’t show up on Friday night and decide to be disciplined.”

To be successful, always look for ways to foster and develop disciplined habits in your players. In today’s society, with so many off-the-field challenges, this can be a very difficult. Accordingly, programs that develop individual and teamwide discipline will have a huge edge.

These programs are already on the road to learning how to win.

Learning how to handle winning

Once you begin to win consistently, it’s natural for athletes to come to expect it.  That’s a good thing but it can also become dangerous if it’s not guarded.

The ego can be a powerfully damaging human emotion. A coach should strive to instill a healthy dose of confidence in his players without it turning into arrogance. When arrogance sets in, you’re in trouble.

Confidence is knowing what you’re capable of doing, knowing that you are prepared and have the skill set to achieve what is expected of you. Arrogance often exists in a false reality, and it can lead to complacency and unpreparedness.

Webster defines arrogance as - an attitude of superiority manifested in an overbearing manner or in presumptuous claims or assumptions. It’s important for a coach to give athletes proper perspective and to keep the team focused on the cause of the organization. A cause that is greater than self.

Tell your team stories that involve perspective. Give them examples of great players like Tom Brady or Peyton Manning who maintain humility during times of great success. Share stories of how great programs like Alabama or the New England Patriots win year in and year out.

Successful programs have learned how to handle winning. They are able to keep a healthy perspective and respect for the game and for their opponents. They focus only on the process involved in winning and not on results.

As Nick Saban says in his book entitled How Good Do You Want To Be?, “It’s about being relentless in the pursuit of your goal and resilient in the face of bad luck and adversity.”

Don’t measure your success on the outcome of a game. For example, if you’re leading by 40 at halftime against an inferior opponent, don’t evaluate yourself based on the scoreboard. Evaluate your success based on your own expectations of your team.

Finally, keep your players humble by teaching perspective and gratitude. This will also help them conduct themselves with class in the community and to become better leaders of men.

Learning how to be a championship-level program

By successfully moving through the first three steps, championship-level programs have developed a culture of winning. This culture is borne out of hard work and sacrifice from others who have gone before them. I always contend that no one succeeds alone. We all drink from wells that we didn’t dig.

Championship programs understand this. To get here, you have to build a culture where winning is expected and winning with class is demanded. But you have to stay true to your cause. A cause that is greater than any individual on the team. One of the required ingredients of this is love.

Jerome Bettis said it best in his Hall of Fame Induction speech where he spoke about the four keys to greatness:

Championships simply cannot exist consistently without it. You have to build a culture of love in your program if you want to achieve this level of success.

It starts by valuing and celebrating everyone in the program, from the top performers to the scout team to the team equipment managers. Everyone matters. Everyone plays a significant role on the team and everyone accepts and has pride in their individual role. Everyone is made to feel like they matter. They have bought in to the team’s pursuit of a cause greater than self.

If you can build a program that is rooted in a cause greater than any individual or team and communicate to each individual that they will live a greater, more successful and more meaningful life from being a part of the cause, then you have something special. Something worthy of celebrating: A championship-level program built upon champions in football and life.

SEE ALSO: When building a successful program, remember the "How"

Eric Smith is a former NCAA Division 1 Quarterback and High School Football Coach.  He is the owner and director of Winning Edge Skills where he coaches and mentors aspiring quarterbacks and hosts Quarterback / Receiver Skill Development Camps throughout Northern CA, Nevada and Oregon. Eric is also a certified Leadership Speaker, Trainer and Coach for the John Maxwell Leadership Team. To connect with Coach Smith visit http://winningedgeskills.com/ or email him at winningedgeqb@gmail.com follow on Twitter at @winningedgeqbr or Facebook at https://www.facebook.com/winningedgeskills