Ask the Official: There’s no 5-yard chuck rule in high school and college 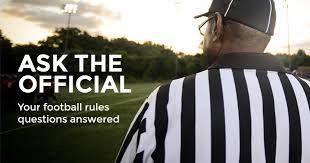 At the youth level, can a defensive back and or linebacker collide with the wide receiver and not be called for illegal contact or pass interference as long as the ball is not in the air?

Most youth football leagues use either the NCAA or National Federation of State High School Associations rule books as the foundation for their league rules. So unless your league specifically addresses this situation, then yes, it’s perfectly legal for a defender to bump or push an eligible receiver downfield before the ball is thrown.

Now, a defender can still be called for holding or illegal contact to the head or neck area if he or she violates those rules. But until the ball is in the air, a downfield receiver is considered a potential blocker.

Only in the NFL is there a 5-yard contact zone where defenders have to be hands off after that point.

Yes. A defender may remove a potential blocker from his or her path with a push or shove, even from the back, anywhere near the point of attack. Similar to the offensive side of the ball, though, all clipping and cut block rules apply to defenders as well.

Also, it is up to the official’s digression whether the push was excessive or unnecessary. If a defender knocks an offensive player to the ground 30 yards from the ball, that can be considered unnecessary roughness, and a flag can be thrown. Also, if the defender strikes the offensive player in the head or neck area, that is a foul as well.