Don't play at a high school powerhouse? Here's how to approach recruiting 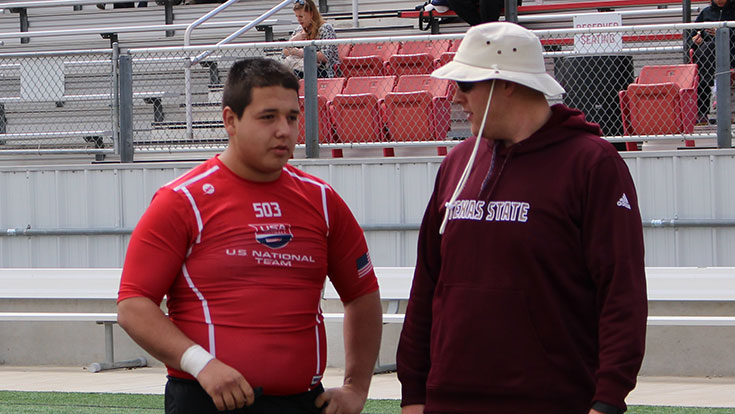 For athletes at smaller schools, it’s much more difficult to get the attention of college scouts. But that doesn’t mean there aren’t ways for these athletes to make their way into the spotlight.

Matt Hennesy, who is the head coach at Locust Grove High School (Okla.), believes that capturing the attention of scouts requires athletes to be realistic and smart, especially if they don't attend schools that are annual stops on the recruiting trail for college coaches.

“It starts with your Hudl film,” said Hennesy, who is also a Regional Director for USA Football’s Regional Development Camps. “Scouts want to see plays that display athleticism, speed, change of direction and an ability to recover from mistakes. Your film should only be about 15-20 plays, with the best at the front of the reel.”

Hennesy knows that while game film is what initially will catch the eye of scouts, it’s intangible character traits that are the bread and butter of athletes from smaller schools.

“A deciding factor for a lot of schools comes down to character,” Hennesy said. “It doesn’t matter if an athlete has the best tape, scouts will put their trust into the athlete who is taking care of his academics and displays great character.”

Each year, schools host one-day and weekend camps for high school athletes. While these camps provide athletes with an opportunity to learn from college coaches, they also serve as an opportunity to make an impression on a coaching staff. At these camps, your high school jersey doesn't matter nearly as much as your on-field performance in front of the people who have the ability to offer you a scholarship.

Hennesy recommends that athletes take these camps seriously because those who showcase their talent and character will stand out from the competition.

“I tell guys to go into the camps making sure you’ve done everything possible to perform at the highest level,” Hennesy said. “These camps are essentially unofficial visits for coaches to sift through talent and if you aren’t prepared you’ll miss out a great opportunity.”

There are also ways for scouts to lose interest in potential recruits. Hennesy believes there is no bigger mistake that an athlete could make in the recruiting process than being reckless with their social media.

“If you’re a small school guy who has managed to gain interest from colleges and you have negative content on your social media, you just blew your shot,” Hennesy said. “Colleges won’t waste their time, money and reputation on someone they can’t trust. Simple as that.”

Hennesy also offered some advice to athletes from smaller schools as they navigate the recruiting process:

“There is so much that isn’t in the hands of an athlete in the recruiting process,” Hennesy said. “But it’s the things that you can control like grades, how you treat others and the choices you make, that can make all the difference.”

The recruiting process is different for each coach, school and athlete, which means that smaller school athletes will continue to have opportunities to suit-up at the next level.

And it may take more effort to get noticed, but that effort is exactly what scouts are looking for.