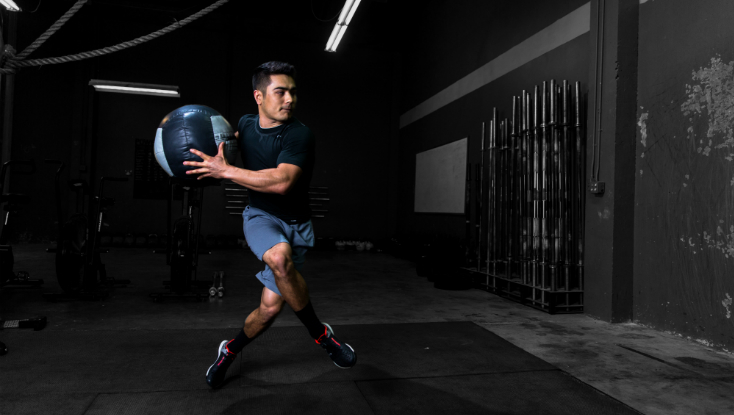 All things being equal, the more powerful athlete always wins.

Contests between athletes of equal size and strength are decided by which athlete can utilize their strength in the shortest relative time.

Being first off the line, closing down an opponent's running lane and winning a jump ball in the end zone are all situations that demand football athletes to be more explosive and powerful than the opposition.

In part 1, we discussed how strength is the precursor to power—i.e., power is expressed from a foundation of strength.

In part 2, we’ll focus on how the direct training of power can help football players utilize strength in more explosive and coordinated efforts.

Peak power and the SSC

“Peak power” is essentially the greatest level of strength that can be expressed in the fastest possible time, and can be improved both by increasing an athlete’s strength and speed of movement.

Assuming strength levels have already been developed (see part 1), you can improve the speed of a movement in a number of different ways.

For football athletes, speed should be developed in football-specific movements—such as those used in sprinting, jumping, changing direction, and position-specific actions (like blocking and tackling).

The SSC is best visualized in the vertical jump, in which an athlete throws their hands downward and hinges powerfully at the hips, knees, and ankles (eccentric) before exploding upward into the jump (concentric). The SSC is prevalent in all active and dynamic motor skills and is a key component in developing faster speed of movement.

“Plyos” are a common training protocol for specifically targeting the SSC.

It's important to note that plyometric training, when done right, is very stressful to the athlete and should not be used in the same manner as conditioning drills or anything designed to drive high levels of fatigue.

Athletes should perform plyometrics drills with as much bounce and natural rhythm as possible—as with all skill-based movements, adaptations are driven through high-quality reps.

Adding fatigue to the drills can lead to athletes developing poor form or habits, creating unnecessary risk of injury or overuse.

Throwing medicine balls at a wall or with a partner allows athletes to express power in all planes of movement at very high movement velocities.

Performing throws from different positions and stances can improve an athlete’s ability to utilize their leg and hip strength at movement speeds much closer to actual gameplay.

Since throwing a med ball is an explosively concentric movement, athletes will actively recruit as much force as possible in the direction of the throw (and with minimal risk).

The snatch and the clean and jerk are the two lifts used in the sport of Olympic weightlifting.

These classic lifts and their variations are great tools for improving an athlete’s ability to express power with submaximal loads.

And since the movements require rapid triple extension of the hip, knee, and ankle, they are optimal tools for helping athletes improve power in jumping, accelerating, and tackling movements.

Since Olympic lifts and their variations are intended to improve power expression, they must remain highly speed-dominant in their execution. In other words, athletes should practice moving the bar quickly and with control before attempting heavier loads.

Using scalable variations of the lifts can help address the learning curve of these technical movements for individual athletes.

Performing a clean or snatch from the “hang position” at mid-thigh, for example, will help athletes learn the lift with a reduced training load while practicing hinging at the hips, utilizing the SSC from the posterior chain (similar to the mechanics of jumping).

Other variations, like the “high pull,” reduce the skill component of catching or racking the weight, which can be helpful for athletes with poor mobility in those positions.

Putting it all together

While strength should be the major training goal in the early stages of the offseason, implementing introductory jumping and landing drills and exercises can help prepare athletes for the power-based training methods that will appear later in the training cycle.

Transitioning the focus of training from strength to power should only occur after athletes have spent enough time increasing their ability to produce maximal force.

Trying to improve power on a weak foundation of force output can minimize the impact of power-dominant training and leave your athletes underserved.

Likewise, power cannot be fully developed in a short window of time.

Depending on the length of your offseason and training experience of your players, athletes might still be learning movement technique when they are expected to be producing peak power.

Allot plenty of time for power development, on a solid foundation of total-body strength, to help your athletes translate weight room work to on-field explosiveness.

Want to learn more about Volt’s football position-specific programs? Check out Volt’s step-by-step guide to designing safe and effective football programs: “The Ultimate Guide to Football Strength Training.” Written by Volt’s Sport Performance department in collaboration with our Strength Coach Advisory Board, chaired by legendary hall of fame strength coach Boyd Epley of Nebraska, this free resource is great for any coach looking to expand their knowledge about strength and conditioning for football.

Jace Derwin, CSCS, RSCC, is the lead sport performance specialist at Volt Athletics, the official strength and conditioning provider of USA Football and the U.S. National Team. Volt provides individualized sport-specific training programs to athletes and teams, built by certified strength coaches, through cloud-based technology. To learn more about Volt Athletics, visit www.voltathletics.com and like on Facebook and follow on Twitter.