The fundamentals of proper field goal and PAT protection 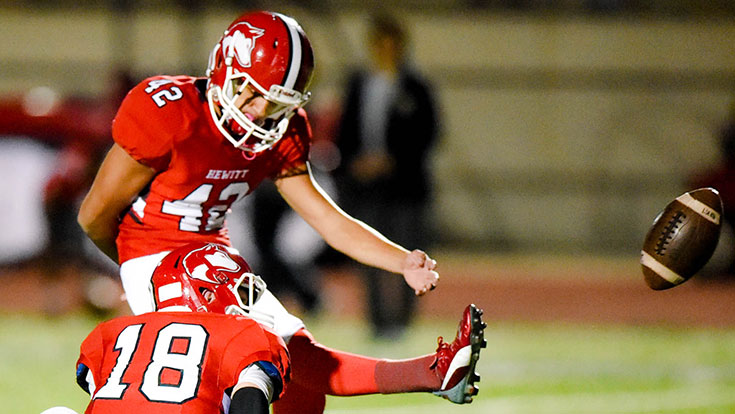 An extra point or field goal at any level can be the difference between winning or losing.

At the high school level, it is sometimes an overlooked area that does not garner enough attention. Obviously, the kickers need to make the kicks and kick enough in practice to do so. But so much more goes into it.

The protection needs to be a major emphasis. If your team lacks attention to detail in that area, it could be a huge problem. Here’s a breakdown of what your team needs to master, and it comes down to alignment and assignment.

The most important part of the play is to get a good snap.

It starts inside with a good snap from our center, who will be set with a wide base. Even though in high school the center can’t be hit, we still have him snap and get his head up and get a big chest.

Our guards are in a three-point stance with their inside hand down, which puts their inside foot back a bit from their outside foot in a staggered stance. The toe of the guards’ inside foot will be at the outside heel of the center, almost touching it.

The holder will be seven yards off the line of scrimmage and have the back knee up. This helps give the holder a firm place to stop as they put the ball down and keeps the knee out of the way on the front side.

We leave our kicker’s alignment up to what is comfortable to him or her.

The center starts everything and this play is no different. The center’s only responsibility is to deliver a perfect snap.

The guards and tackles have the same responsibilities. They all take a six-inch jab step with the inside foot. This step is a bit backward and interlocks the fixed leg of the person inside them. With that step, they brace with the back leg and throw an uppercut with the inside arm.

This pops the hip and shoulders up slightly to deliver a blow to the player entering their inside gap. These players never move their outside foot. They can use their outside arm to help that gap, but the inside gap is their responsibility, period.

The tight ends take the same jab step with the inside foot to step behind and interlock with the tackles. They punch the inside gap first as this is the first responsibility.

Then the tight ends hinge step with the outside foot, creating a 45-degree angle. After feeling the pressure on the inside gap, the tight end can look for a crashing rusher to the outside.

The wing backs jab step to the inside and, just as the tight ends, will hinge step. Looking inside first and washing out the outside rush if the inside gap is not penetrated.

The holder is to get the snap down and the kicker has only to kick the ball through the uprights.

Placekicking is sometimes taken for granted. It is one of the most important plays in football and very little separates teams from each other.

Properly teaching your players proper assignments and techniques can give you an advantage over teams that don’t make it a priority. Always preach to protect the inside gap and start with the personnel in the middle.