How to defend the Double Wing offense 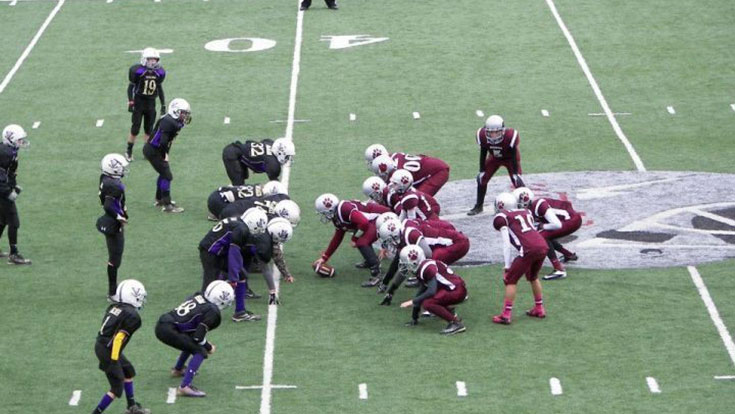 The Double Tight/Tight Split Double Wing offense is difficult, but not impossible, to defend.  It is a very effective youth football offense that is common among top youth football teams.

Don Markham invented the offense in the mid-1970s. His high school teams went on to post a 309-110-1 record. In 1994, his Bloomington High School (California) team broke a national scoring record by putting up 880 points in 14 games.

The double wing is a series-based offense that tries to outnumber the defense at the point of attack and put the defense in conflict with just a handful of complementary plays. The base alignment is a balanced formation with two tight ends aligned foot-to-foot. The quarterback lines up under center with a fullback aligned right behind the quarterback, so close that the fullback's face mask is nearly touching the rear of the quarterback.

The wingbacks are aligned at both wings, just 1 yard back and 1 yard wide of the tight ends. The typical mix of plays for Double Wing teams are: FB Wedge, FB Trap, WB Toss Off-tackle Power, WB Counter and a couple of simple play-action passes. The goal of the Double Wing is to control the ball and the clock, methodically moving down the field four or five yards at a time. 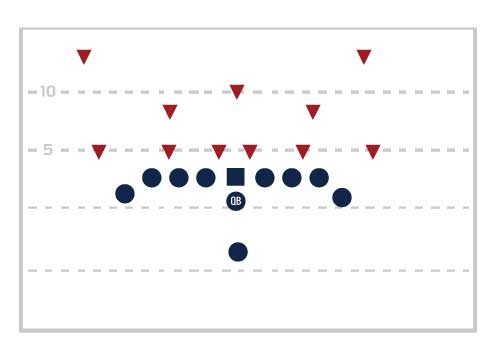 Don’t change your entire defense just to stop this offense. Flavor-of-the-week defenses rarely work, but making nuances to your defense can be effective. This approach is a variation of my base youth 6-2 Monster Zone Defense.

Toss Off-Tackle is the base play that you will likely encounter most frequently. Note that the Wing (the ball carrier) is in short motion before he takes the pitch from the QB off-tackle. 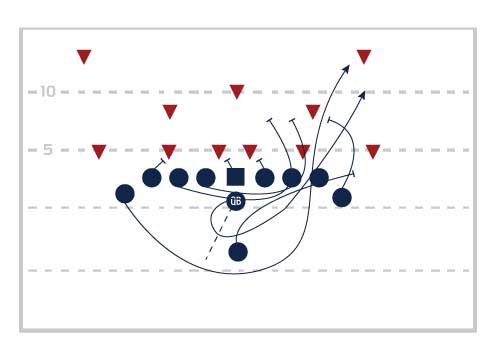 Defensive tackles. Put a player in each of the “C” gaps, between the tackle and tight end. They only penetrate to the heels of the linemen. If the defensive tackle feels a double team, he falls to the ground and creates a pile. If the defensive tackle comes through clean because the offensive tackle goes second level, it’s going to be the Fullback Trap play. Now our man takes an inside path and attacks the inside shoulder of the pulling guard. If the Offensive Tackle pulls away, your man goes as flat as he can in the direction of the puller, trying to make a play in the backfield.

Nose tackles. Nose tackles will bear crawl or frog into the “A” gaps. This will take away the Fullback Wedge play.  If they can get enough penetration, it will also take away the second puller which the Double Wing offense needs for its Off-Tackle Toss play and Counter play. The nose tackle's goal is to create a pile and deny pullers second-level blocking.

Cornerbacks. Corners play in zone with each having the deep half of the field to their side. If the motioning wing goes away, the corner must slow play the run and look for the counter play. If the Wing to their side blocks down to the end, it's a sweep; if the wing blocks the linebacker, it will be off-tackle. Look to spill the off-tackle outside with the corner now playing contain.

Monster. You can play the Monster a variety of ways. If he is aggress and perhaps your best player, you can let him free-style a bit and look for the ball. Alternatively, he can read the guard opposite the motion. He also is your deep hole man on a pass.

In any event, you will need to be on your game to stop a well coached Double Wing team. Taking these steps can help slow down an otherwise powerful offense.

Dave Cisar is the founder and President of http://winningyouthfootball.com He has spoken at over 230 coaches clinics worldwide, named as the No. 4 Most Influential on Hudl’s top 100 and has authored several award-winning youth football books.