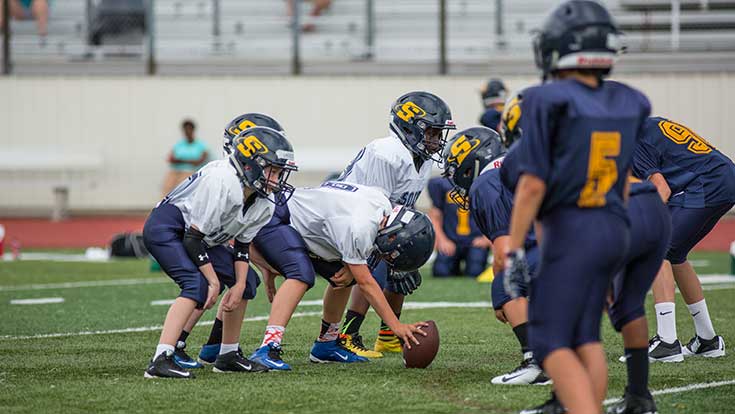 In order to continue to grow, perhaps the sport of football needs to shrink a bit.

USA Football is excited to announce the release of its Rookie Tackle pilot program, a bridge between flag football and traditional 11-person tackle football which features, among other modifications, smaller fields and fewer players per team.

In addition to serving as a way for flag football players to transition to 11-person football, Rookie Tackle will also provide another entry point for those wishing to begin to learn football in a smaller setting with more hands-on instruction.

“This is an exciting step in our sport’s evolution for the good of young athletes,” said Scott Hallenbeck, USA Football CEO. “The 11 youth programs participating in this pilot season will help us evaluate Rookie Tackle and the benefits of a player pathway for athletes, coaches and parents.”

One traditional field is large enough to contain two Rookie Tackle games simultaneously. Teams consist of six, seven or eight players while players on offensive and defensive lines begin each play in a two-point stance. There are no special teams in Rookie Tackle, fostering a quicker-paced game with more offensive and defensive snaps as players rotate through multiple positions.

Following the 2017 season, USA Football will study and analyze the results from the Rookie Tackle pilot program to understand how everyone involved—players, parents, coaches and commissioners—took to the concept of Rookie Tackle and what changes may improve it for 2018.

The initial step to launch pilot Rookie Tackle this fall is a step that key stakeholders around the sport are embracing.

“The game of football has evolved tremendously over the last several years. We must continue to find ways to grow and evolve the game, and I believe Rookie Tackle does that,” said Jon Butler, executive director of Pop Warner. “Rookie Tackle is a common-sense approach to introduce tackle football to kids. We applaud USA Football for taking this very valuable step towards improving the game at the youth level.”

“The proper development of young players is important to ensure the sport’s long-term viability, and Rookie Tackle is the right step to ensure football’s enjoyment is continued for generations to come,” said Bill Polian, Pro Football Hall of Famer and ESPN NFL analyst.

Below is a list of the 11 programs that will participate in the Rookie Tackle pilot program during the 2017 season: