How run-heavy teams can thrive in the passing game 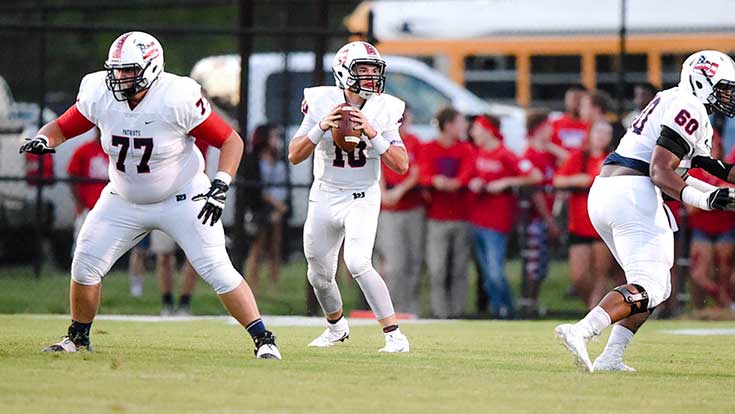 Many teams, including ours, make running the ball a top priority.

Our Flexbone Triple Option attack is definitely a ground-based attack and very run-heavy in the plays we execute. If the game is going as planned, we will probably run the ball 80 percent of the time. Our success depends on it.

However, not having the fear of a vertical attack instilled in our opponents can make it difficult for us to have success in the run game. That’s why it is vital for run-heavy teams also to be able to have success through the air.

When we broached this subject internally the first thing we needed to do was define what success throwing the ball looked like.

Do you need a certain completion percentage? What about a number of touchdowns? Or even a minimum number of attempts?

For us, we needed to generate explosive plays and be able to pass when it is given to us.

What we mean by “given to us” is, as a run-heavy team, defenses will stack the box and cheat safeties toward the line of scrimmage to add run support. We take this as an opportunity that we need to cash in.

If we run our inside veer play and our play-side receiver is pressing vertically to block the play-side deep defender, and that defender runs past him to support the run, we have to hit the play action pass the very next play—because the defense is giving us easy money deep down the field.

This is how we define success in our passing game: being able to cash in on a few big opportunities each game.  Here are our six keys to keep the passing game fresh as a run-heavy team:

Prepare in the offseason (because you won’t have much time during the season). Because of time constraints, you must utilize your summers to develop timing and rhythm in your air attack. As a run-first team, where we run the ball eighty percent of the time, our practices are dictated that same way. Without a good summer of practicing the passing game, you just won’t have enough time to be proficient at doing it.

Establish a good running game. This one is obvious. If you want to be a run-heavy team, you better be darn good at running the ball. It seems elementary but is vital in being a true run-heavy team.  The better at it that your team is, the more deadly your play action passes can be.  You really need to run the ball to set up your chances to stretch a team down the field.

Recognizing when to throw. Recognizing the play of defensive backs is crucial. If they are coming into the alley or the box, you better be able to throw a dagger to make the defense pay for playing you that way.  Sometimes, just knowing when to do this is as important as being great at it.  For us, it happens in inside veer, when the receiver comes off the ball hard and tries to press the corner deep to declare him the deep defender, and the corner runs right by him in a cover 1 or 3. We will come back the very next play and throw over that attacker. When this happens, the pass just needs to be in a close proximity; we don’t have to thread the needle to generate a touchdown.

Taking what’s given.  Two things come to mind for us with this. When a team gives you the deep part of the field, you have to throw it there. This will, in turn, help your run game because the defense will respect the fact you went downfield. The other situation where we take what is given is our two-minute offense.  By the nature of our run game, we like to throw vertically for touchdowns, but we don’t want to force anything at the end of the half. Be patient and take underneath routes, crossing routes and the sideline throws if they are high-percentage options that move the chains.

Demonstrate total confidence in you quarterbacks. We all entrust our offense with these guys. Even though you’re a run-heavy take, make sure your signal-callers know you trust them. Drill into them the route concepts and progressions until it is part of their subconscious.  Let them know you trust them to execute—and give them the reps and knowledge to do it.

Put it early in your install.  Make passing a priority and let your players know it is important.  We still want to only pass the ball 20 percent or so, but we install our play action passes on day two.  It’s the fourth package we put in. This way our team knows that even though we will run first, and second for that matter, we will throw when the opportunity arises.

As the offensive coordinator of a very run-heavy team, I know the importance of throwing the ball in order to be successful.  Don’t tumble in the pitfalls of being too proud, and wanting to ground and pound no matter what.  Be prepared to throw and throw for big chunks of yards – on your terms.

It is a great achievement to be a well-rounded team, even if you are not balanced. Go put up some points.  Good Luck.