From Wall Street to his local community, Brandon Copeland is taking football lessons beyond the field 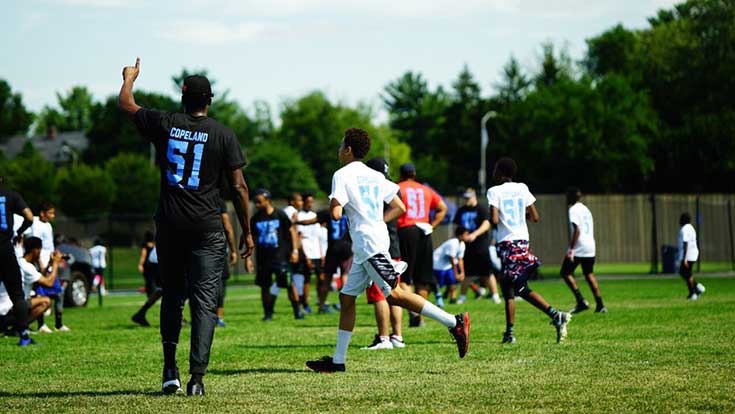 In the world of professional football, Brandon Copeland knows one thing is certain: Nothing lasts forever. Whether it’s his time in the NFL or financial stability that comes along with it, Copeland is already preparing for the next step.

The Detroit Lions defensive end, who is a graduate of the prestigious Wharton School at the University of Pennsylvania, is making big moves in the financial world.

This offseason, the 26-year-old traded in his jersey for a business suit, serving as an analyst for Weiss Multi-Strategy Advisers, an investment management firm based on Wall Street.

There, his job is to identify and research public companies and determine their IPO valuations. He presents his ideas and opinions to his team and they predict which companies will make the most money for the firm. Essentially, he helps determine the amount of money they are willing to invest in companies.

And this is no publicity stunt: Copeland is making meaningful contributions to the company.

“He’s part of the process and he works for our firm and with me because he contributes to the process and makes our team better,” Ron Darnowski, one of Copeland’s colleagues, told ESPN. “This isn’t, ‘Oh, let’s help out Brandon and teach him some stuff and give him some work to do.’

Copeland is determined to build a foundation for his career outside of football.

By choice, he budgets to live off 15 percent of his total yearly salary and saves the rest.

"Now anything that I have in my account the year previous, I don’t touch it. I put it toward investments. I live off what I make in the spring in terms of OTA checks and stuff from the active season,” Copeland said.

Even while holding down two jobs, Copeland still finds time to fulfill his dream of hosting football camps for young athletes.

“You always dream of that day where you can come back and have your own camp,” Copeland said last summer. “For me, that has me very excited about the opportunity of it.”

Earlier this month, Copeland hosted a USA Football FUNdamentals camp in Baltimore. The camp taught skills like passing, catching and running through a series of drills without tackling.

He also handed out hygiene kits, backpacks, and even some laptops, and asked kids to share what they think it takes to succeed off the field.

Basically, Copeland is trying to empower young people to look beyond football—just like he’s doing—and to help others along the way.

“It teaches the kids a lesson that it took me longer than I would have liked to learn in terms of you can give back at any age,” Copeland said. “While climbing up your own respective ladder, you can pull other people up as well. I’m hoping that by us instilling this in the kids young, that trickles throughout their life.”

Thanks for coming through Jermore : We appreciate u - Do me a favor and tell me something you learned that has nothing to do with football? https://t.co/jeoBA4uUdz