RPO: How to defend the run-pass option 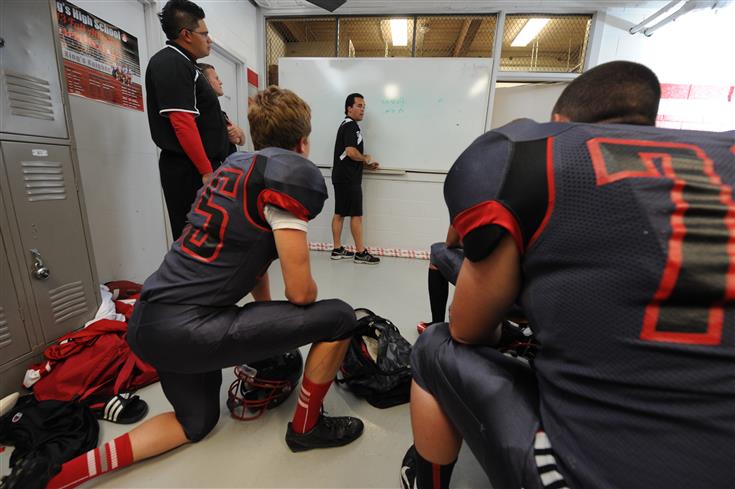 Run-Pass options are the latest trend in offensive football that is keeping defensive coordinators up at night. RPOs are plays in which a run play is tagged with a pass play. The offensive line would run block, while receivers would run routes. The quarterback has the option to execute the run play or throw a pass. They are hard to stop, prepare against, and could mess with reads and rules that defensive coordinators engrain into their players.

RPOs take advantage of defenders with run and pass responsibilities. They work best against zone defenses. For example, if a defender has to cover the B gap but also has inside wall responsibility in a cover 3, the quarterback could read his movement and make him wrong on each play. If he defends the run, the QB will throw the ball and vice versa. So how do you defend them?

Penn State was one of the most innovative RPO teams in the country, last year so I asked one their offensive coaches, Charles Huff, what was an effective RPO defense that he saw last year. He directed me to the Nittany Lions’ game against Indiana. Let’s take a look at how they defended Penn State’s RPOs.

On the pre-snap, Indiana came out with a two-high look. They have a six-man box built with five defenders at the line of scrimmage and one linebacker on the second level and are playing man coverage. Quarterbacks typically read the weakside linebacker (linebacker on the same side as RB vs. shotgun) on RPOs and Indiana’s weakside linebacker is showing blitz, which leads the QB to believe that he has a one-on-one with his best receiver with the middle of the field open.

When the ball is snapped, the weak safety rotates into the box. This does few things. It allows the weakside linebacker to aggressively play the run or blitz without having any pass responsibility, it brings an extra defender in the box, and it could cause confusion for the offense. The corner on the single receiver could also play a soft press technique known as “soft shoeing.” He doesn’t have to aggressively bump because he knows he has help on short routes. Instead, he could take a shuffle step and mirror the receiver, which makes it easier to cover deep routes. The rotated safety’s primary responsibility is to help as an robber in the middle of the cover-1, but he could also help as “secondary-fill” against the run.

The pre-snap look gave an inviting look for the quarterback and receiver on the backside of the play, but the post-snap movement caused confusion and they clearly weren’t on the same page as the quarterback threw the ball nowhere near the receiver.

Indiana was able to frustrate the explosive Penn State offense with this defense in the first half, but there are weaknesses playing a lot of man coverage against talented teams. Penn State scored 31 points in the second half. So how do you defend RPOs if you don’t want to play too much man coverage?

A common RPO that is hard to stop is the stick concept out a 3 x 1 formation. The receivers on the trip side would run a stick concept, while the offense runs a run play away from it. This puts the weakside linebacker in a bind because if he doesn’t drop back to cover the inside receiver on a short route, it’ll be open all day. If he drops back, then the defense will be a man short in run support.

Similar to what Indiana does, Saban gets another man in the box and frees up the responsibility of the linebacker with a safety rotation. However, he does it in a different manner. The safety rotates to the frontside of the play to play the run, which allows the weakside linebacker to focus on taking away the pass option.

Essentially, the weakside linebacker leaves the box to defend the pass, while the safety fills the role of the sixth man when the ball is snapped. This allows the front side defensive end to play the gap inside of him because the safety contains the outside.

The end forces a double team and causes the running back to bounce outside into the waiting arms of the rotating safety.

As offenses continue to think outside the box, their defensive counterparts have to do so as well. Saban’s approach to defending RPOs allows the defense to play a form of zone coverage and keeps it simple for his weakside linebacker. Indiana’s approach is a much more aggressive man-to-man approach, but was effective because their defense is well-versed in the man coverage techniques. What they both have in common is the principle behind them: Rotate a safety in the box to free up the weakside linebacker with only one responsibility.