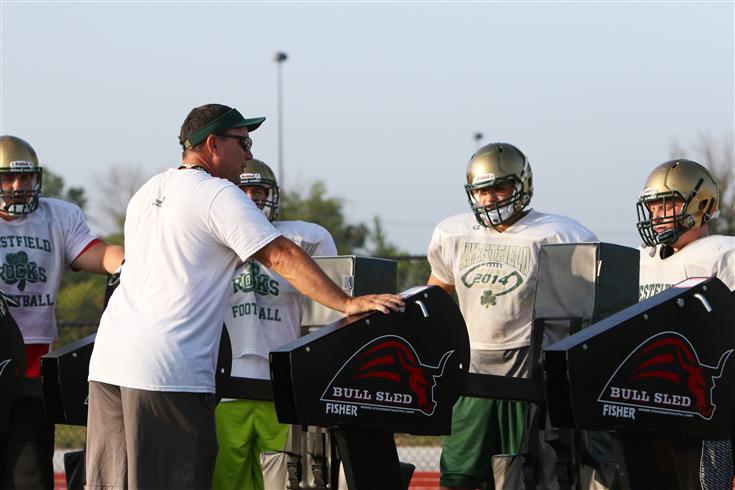 Teams win or lose football games in the trenches. It’s true at every level. If you don’t win the battle up front, your offense will probably falter or your defense will likely get shredded. There is nothing more demoralizing than being dominated on the line, because all the strategizing and adjustments in the world can’t help you.

1.     Athletes get specialized too quickly

Fans, and even some coaches, generally believe that playing offensive line is all about brute force, strength and attitude. Those things are obviously important, but Manyweather believes young athletes need “generalized strength, conditioning, and mobility training.”

Offensive linemen have to learn how to bend and move properly, instead of just focusing on putting up monstrous numbers in the weight room or hitting the sled all day. When young athletes get specialized training, coaches usually rush them to learn movements, but their bodies aren’t ready for it.

They have to build a movement “foundation” before being asked to move on to more complex movements.

Manyweather is a firm believer in teaching kids how to:

-    Get into an athletic position and master the body weight squat before we force them into getting into a three-point stance.

-    Learning how to shuffle before mirroring.

-    Learning how to lunge before pass set.

Kids will sacrifice form to a dangerous level to put up numbers in weight room. A lifter could deviate from an ideal level when they are trying to max out, but it shouldn’t ever approach a level where they could hurt themselves. Players should definitely avoid this at all costs during normal repetitions.

“Often times, coaches allow poor quality lifts because it appeases kids and often parents and they allow this to self-promote,” Manyweather said. “There comes a time when athlete will strain a maximal load, but proper technique should always be the focus.”

The focus of every high school football weight program should be good form, not only because it reinforces quality movement patterns, but it also keeps athletes safe.

Too often, coaches try to step outside of the box with new training methods or technique that do not fit their system or program. If something doesn’t make complete sense to you or your program, either learn more about it or don’t use it.

If you aren’t a master of something, how do you expect your kids to be? Keep things simple. The things we know best are the things that we know how to explain simply.

Manyweather left me with a quote that Joe Kenn, the Carolina Panthers strength and conditioning coach, told him.

“Our job as coaches is to protect athletes from themselves and the rigors placed upon them,” Manyweather said. “We do this by preparing them and committing to the process of a long-term commitment to development.”