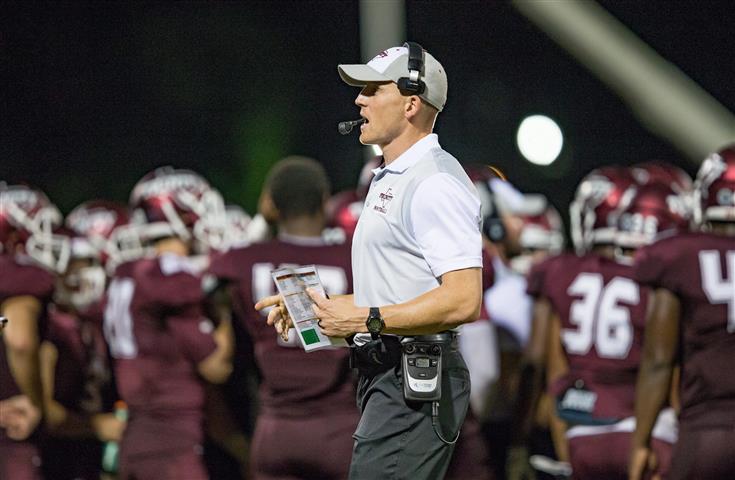 There is an old adage that says you can't go home again. For Jerheme Urban, Head Coach of Trinity University in San Antonio, that adage has proven to be false.

Growing up in nearby Victoria, Urban always knew football would be a part of his life. Even as he ascended to the highest of heights in professional football, he never dreamed the game would take him as far as it did.

“I started playing football in second grade with YMCA flag football out in Victoria,” Urban said. “I played flag through sixth grade before I put the pads. Every South Texas kid growing up dreams of one day playing for the Dallas Cowboys. Once I put the pads on, I loved the game even more, if that was possible.”

His skills earned him a scholarship to Trinity, where he excelled after making the switch from quarterback to wide receiver. For the Tigers, Urban was a star on the gridiron and on the track. Before he left the university in 2002, the future head coach earned records in career touchdowns scored, career receiving touchdowns, single-season receiving touchdowns, and single-season touchdown receptions for the Tigers. He is also ranked second in career receiving yards, career points scored, and career kickoff returns.

“I had a few offers from some other schools and some opportunities to walk on at bigger programs, but when I came for my visit to Trinity, I just fell in love with it,” he said. “I have so many great memories of playing here. We went 12-1 my freshman year and lost in the national semifinals. Everything we did – and still do – here is first-class. I learned what it took to be a great football team. I also got to travel all over the country. I rode in my first airplane while I was here. I wouldn't have traded any of it for anything.”

While with the Tigers, Urban was a three-time All-Southern Collegiate Athletic Conference honoree, and was elected to All-America Teams by D3football.com (first team) and the Football Gazette (second team). He was a key player on the 2002 Trinity football team that made it all the way to the Amos Alonzo Stagg Bowl, the Division III championship game. He earned a reputation as a smart, heady, hard-working player. Those attributes garnered him attention from the NFL and in 2003, he signed as an undrafted free agent with the Seattle Seahawks.

RELATED CONTENT: How Terry Hanratty's football career prepared him for the rest of his life

“It was always a dream and a goal of mine to be able to play at the next level,” he said. “It's funny, I was just hoping for a practice squad opportunity. I wanted the chance to compete against some of those guys at that level and then I got there to practice and I found out I could actually compete with them. During my nine years in the NFL, I was around some great players and some great coaches. It drove me to really prove that I belonged there. Having that drive, I think, is what allowed me to succeed at the level I did.”

After his playing career was over, in 2013, Urban was offensive coordinator for the Tigers after serving as the defensive backs coach the previous year. He ultimately became the Tigers' head football coach at season's end, succeeding the legendary Steve Mohr.

“I always knew I wanted to get into coaching once I was done playing,” he said. “The opportunity came up for me to come back here as an assistant and I jumped at it. The program is something special. We've competed for, and won, national championships in sports all across the program. To be able to carry on that legacy is something I don't ever take for granted.”

Since taking the reins, Urban has compiled a 20-14 mark at Trinity, including a 3-1 start so far this season. The team's 8-2 2015 campaign doubled the number of victories from the 2014 season. Since becoming head coach, six Tigers have been elected as postseason USA College Football All-Americans, and 23 were tabbed for the All-SCAC teams. The team has twice boasted a player named SCAC Defensive Player of the Year, and 12 players have been selected as preseason All-Americans, three made the All-Region Team, and three were named Freshman All-Stars. Though he is in his relative infancy in terms of tenure as the Tigers' head man, he has already put his stamp on the program.

“When I was offered the position, I was grateful to be given the opportunity and knew I wanted to build on what was already here,” he said. “The tradition of excellence that had been created here was something special. I wanted to continue that. To do that, we have to be on the lookout for special types of players. The job doesn't have any days off or any real time off as we are constantly looking for players and for ways to make the team, the program, and ultimately the school better. There is no other place like Trinity. You have one of the top educational universities in the country with a Division III football program that plays games all over the country. We will continue to find the right fits for us and our team and I know we'll get back to competing for national championships soon.”