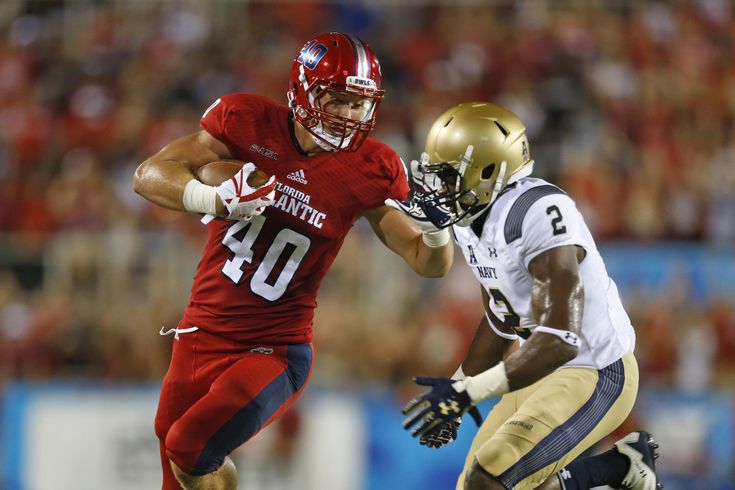 Lane Kiffin has had a colorful career as a coach. Not many people can say they ticked off Al Davis, Nick Saban, and the entire state of Tennessee in one lifetime, but Kiffin can. These days, he is continuing his story at Florida Atlantic University, where he led the program to a remarkable turnaround.

Though he might not get along with everyone, it’s hard to deny that Kiffin is one of college football’s brightest offensive minds. Before he arrived at FAU, the football team had three 3-9 seasons in a row. Kiffin led the team to an 11-3 record in his first year at the school.

He did it with an explosive offense that averaged 40.6 points a game. Like almost all of the best offenses in college football, he used a tempo, spread-to-run offense, but put his own unique twist on common concepts.

He had some very good players as well. Running back Devin Singletary scored 32 touchdowns, and that’s nice and all (sarcasm) but an unsung hero in Kiffin’s offense is H-back Harrison Bryant (No. 40).

Though his stats don’t jump off the page at you (32 catches 408 yards, five touchdowns), he played a critical role in the offense with his smarts and versatility. Not many H-backs or tight ends around the country had as many different types of responsibilities as Bryant did in Kiffin’s offense. He was a lead blocker, a crack blocker, a split zone blocker, a perimeter bubble screen blocker, and ran variety of routes in Kiffin’s RPO and play action package.

It’s not only the variety of responsibilities he had in the offense, it was all the different techniques he had to learn to do his job well.

RELATED CONTENT: Why Penn State running back Saquon Barkley should be a high NFL draft choice — and why he might not be

The FAU offense scored a lot of touchdowns and almost every one of their big plays, you’ll find Bryant throwing a key block to spring the play. Yes, that’s a H-back’s job, but what’s impressive is all the different types of blocks that he’s asked to make.

Here, he is lined up right behind the line of scrimmage between the guard and tackle. His responsibility is to lead block for the running back to the weak-side linebacker like a fullback. This allows the backside guard and tackle to “big” block the defensive linemen on their side without having to worry about getting to the second level.

Bryant has a tendency to block a little high-- partly because he’s 6-foot-5, but he gets the job done and springs Singletary for a big play.

Aside from regular zone plays in which he has to block the backside end, Bryant will use sort of a “sift” block technique and essentially block two players on one play.

He first positions himself like he’s going to cut off the backside end. The end has to react to Bryant’s block as well as respect the quarterback fake so he can’t slice inside to make a play. Bryant then times his release to the second level perfectly. It seems as if he’s supposed to block the linebacker, but after seeing the linebacker get caught up in the wash, he goes to the secondary to block a safety. Once again, Bryant’s effort creates a big play opportunity for Singletary.

Bryant also will line up in the slot and make blocks in space.

On this power read concept, he’s responsible for setting a “crack” block on the outside linebacker in case the quarterback hands off the ball. He does a good job of getting on the linebacker’s outside shoulder, and shortening his strides as he gets closer to the linebacker. Again, it’s not a devastating block, but he seals him off and gives the runner plenty of space to run outside.

In most offenses, if an offensive player motions out to the perimeter, that player would be a receiver for a possible bubble screen, but Kiffin will actually motion Bryant out of the sniffer position and use him as a lead blocker for the screen.

This action takes a little attention for the No. 1 receiver, who is actually the one who will get the screen and causes some hesitation for the defense.

If he’s not throwing blocks, Bryant is also a threat as receiver and runs a variety of routes as a receiver in Kiffin’s RPO package.

There are two plays in the clip above. In the first clip, the quarterback reads the weak side linebacker. He flowed toward the run so the quarterback pulls the ball and throws to Bryant. On the next play, the linebacker covers Bryant, which gives the offense a numbers advantage for the wide zone run play.

This is another RPO that Bryant runs on the backside of a zone read play.

Here, he shoves the end inside, which triggers the safety to come up inside the box to play the run. Afterward, he releases into the flat. The quarterback sees the safety playing the run, so he pulls the ball and throws to Bryant.

Right now, Bryant is sort of a tweener. He is too tall to be a fullback, but he’s too light to be a tight end. He’ll be a junior next year, so he has some time to put on some size. His numbers may not jump off the page, but he deserves a ton of credit for his role in Kiffin’s offense. It’s rare to find a player with so much football instinct, but that does not take away from the hard work he surely put into doing his job well.

RELATED CONTENT: How Auburn University's 'Sugar Huddle' befuddles defenses, and why it's easy to install in your game plan