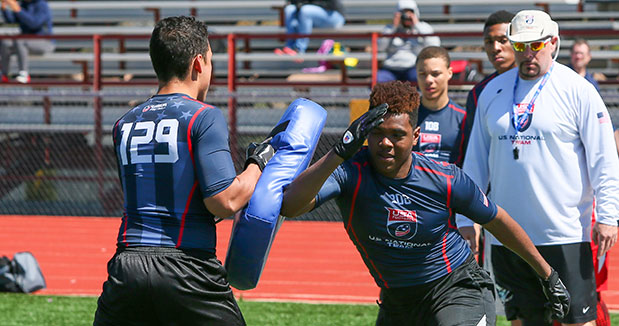 Conditioning is a vital part of every football team’s practice plan. However, inexperienced youth football coaches tend to overdo it, and then it doesn’t yield the type of results they want.

The average youth football game consists of about 80 offensive and defensive snaps, and a handful of special teams plays. On average, there will be two or three plays that go for 40 yards or longer. Still, many youth coaches condition their teams by running 40-yard sprints, along with half-mile and quarter-mile laps.

Youth football is an anaerobic activity that includes mostly sprints of 10 yards or less, which might require a change of direction or two. Rarely does a football player run in a straight line for more than 10 or 15 yards. That means players who have quickness, acceleration and body control will be successful, not necessarily the athlete with good straight-line speed for 40 yards or whoever can run a half-mile the fastest.

So why do coaches put kids through laps and extensive conditioning drills? Because that’s what they did during high school football years (or decades) ago. Work hard, win the game in the fourth quarter with great conditioning – blah, blah, blah. I used to coach that way, too.

Teams who put a lot of practice time into conditioning and full team scrimmages tend to do poorly. Anyone can get kids to run laps or gassers, but it takes skill and patience to work kids out in individual and group settings, with proper technique and development drills.

Gassers are almost always done at the end of practice, and the kids know that. So how hard do they work during that last 30 minutes leading up gassers? Do they give it everything they have? Do they leave 100 percent of their effort on the field? Or do they do like you did in high school and save up some juice to survive gassers? The answer often is, they conserve energy.

We all know those “sprints” aren’t full speed. So when players do gassers, how much better football shape do they get by running in a straight line at half-speed? It's only as fast as the athlete needs to run to not get yelled at by the coach, so coaches get minimal effort in a straight line that's often a test of wills between players and the staff.

A more effective conditioning method is to devise skill-building games, where kids compete at true 100 percent effort, which by their very nature build in true football conditioning. When kids compete, they go all out. When they have fun, they give full effort, and coaches don’t have to yell or penalize anyone for not doing so.

An example of this concept is the deer hunter game. This is a fun conditioning drill to wrap up practice, find out in the first week who your best athletes and get in some conditioning.

Map out a square or circle with cones. The square is usually 30-by-30 yards or so. Choose four players as hunters and put yellow shell jerseys on them to distinguish them from the others. Put the four hunters in the center of the square and ask everyone else spread out within in the square. At the coach’s signal, the hunters try and tag the deer. Once tagged, the deer move outside the box. The deer who survive are almost always your best athletes.

RELATED CONTENT: 5 ideas to create your own football practice equipment

When the last two or three players try to stay in the game, coaches will witness some of the most elusive start-and-stop football moves known to man. Play the game for at least 10 minutes. The kids love it, and even though they'll sweat and breathe hard after it's over, they'll beg for more. When was the last time your kids begged to do more conditioning sprints?

Use games that rely on relays or competition, with short burst, nonlinear, explosive movements to condition kids the way they need for football. With this method, you'll make youth football conditioning drills more fun and effective.

Dave Cisar has coached youth football for more than 20 years. He founded and ran two large youth football organizations in Omaha and Lincoln, Nebraska. He has been named a Nike Coach of the Year five times and has spoken at more than 200 coaching clinics worldwide. Dave helps youth coaches and teams with his book and instructional videos offered at winningyouthfootball.com.

This is an updated version of a blog that originally published March 25, 2015.