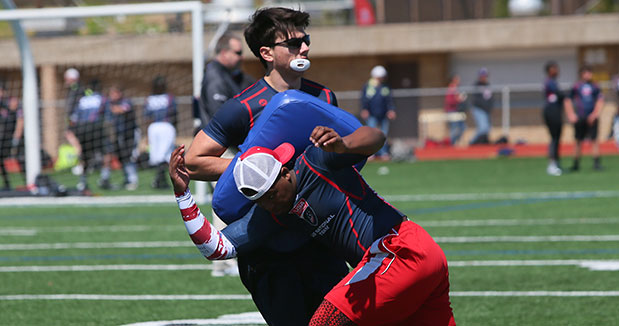 Defensive coordinators believe in one of two schools of thought when it comes to defensive line play – single-gap technique or two-gap technique. Through the years, I’ve chosen to subscribe to a single-gap responsibility for two main reasons.

In a single gap control defense, a premium is placed on getting off the ball. This starts with the stance. We teach our players to get in the following stance:

While we train our players to use the “V of the neck” as a visual key, they should use periphery vision to see the ball move. We spend the initial part of individual practices working on the following stance/get-off drills:

Here is a video of these drills being performed:

Because we we key the outside “V” of the neck of the offensive lineman in front of each defensive lineman, we rarely align on the inside shoulder of offensive linemen and we don’t talk much about visual and pressure keys. Our “stab-and-grab” hand placement technique is as follows:

We use the following progression to teach hand placement with our defensive linemen:

Here is a video of the hand placement progression we use:

When we talk about defending one-on-one run blocks, we talk about the triple threat position that offensive lineman can create. They can do one of three things presnap: base block, down block or reach block. How we destruct those blocks are detailed below:

An important note: Since we are a gap control defense, we talk about escaping the block with a rip or punch only when the ball commits. Doing so too early may result in losing gap integrity.

Here is a video of the one-on-one block progression we use:

By simplifying defensive line technique into the proper footwork and hand placement, coaches can teach lineman to react to various schemes.

Next time, I will focus on how we instruct our defensive linemen to defend against two-on-one blocks such as double teams and scoops as well as defending against specific run schemes.

Mike Kuchar is co-founder and senior research manager at XandOLabs.com, a private research company specializing in coaching concepts and trends. Reach him at mike@xandolabs.com  or follow him on Twitter @mikekkuchar.