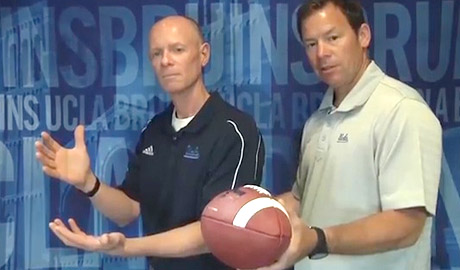 Anticipation. Timing. Playing the ball and the opponent.

These are difficult skills for NFL defensive backs to master. Now imagine teaching a youth football player still growing into his body how to properly defend a pass while getting to the receiver at just the right time.

In the video below, Mora offers some tips and simple drills to help young defenders improve their chances of breaking up a pass while both securing the tackle and not being flagged for pass interference.

“A common mistake with young players is they swat at the ball, they take a swat down at the ball but when they do they only have one chance to hit the ball, and if they miss it, the receiver catches it,” Mora said. “What we like to teach is to put the palm of your hand facing the quarterback in the pocket of the receiver’s hands and keep it there. … That gives me more opportunity to make a play on the football.”