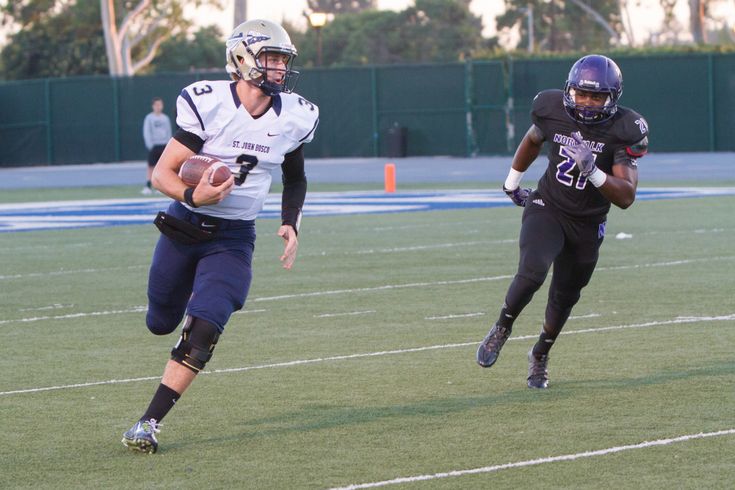 Before quarterback Josh Rosen was selected in the first round of the 2018 draft, he led the St. John Bosco High School football team on a prolific run against some of the toughest competition in the country. Since he’s graduated and moved on, the Braves have remained a force in the grueling Trinity League with the help of varied spread option attack. Let’s take a look at some of their concepts:

RELATED CONTENT: See how last year's top-ranked high school football team ran its offense — and how your team could make it work

When you’re primarily in the shotgun, it could be difficult to get a strong play action game because running backs aren’t going downhill as hard as they would from under center. It’s even more difficult to get a boot game going because defensive ends are trained to stay home if they are unblocked to defend the zone read.

One way to get the end to freeze for long enough for the quarterback to get outside the pocket is to fake a split zone.

On this play, the offense had the Z receiver trace motion into the backfield. When the ball is snapped, the Z runs at the backside defensive end like he’s going to kick him out for a split zone, but instead leaks out into flats. The end has to freeze because he’s trained to squeeze the block against a split zone. The quarterback faked a zone left and booted right.

It looks like the quarterback only has two options on this play — look to the flat right away, and if it’s not open, take off and run.

Similarly to the last play, this boot also involves a fake split zone block, but from the H-back rather than the Z-receiver. Also, there is another passing option on the play — the slot toward the boot side runs a wheel route.

The De La Salle defense has a scrape exchanged call, which is a common response to zone reads to team on the backside of formations. The idea is for the end to crash inside to force a “keep” read and for the inside linebacker to loop outside and tackle the quarterback.

The Bosco offense called the boot right into the scrape exchange, but because it takes a little longer for the linebacker to loop around, the quarterback had enough to time to get the ball to the wheel route.

This is a difficult route to cover against zone, because typically the overhang defender has to run with the wheel route, which would leave the flats open. The defender in the clip tried to play in between both routes, but there simply is too much distance to cover and the Bosco quarterback was able to throw the ball over his head for the completion.

This is one of the easiest plays to install and an extremely effective one if you have a mobile quarterback. I’m surprised that more high school teams don’t run the QB draw with a lead blocker. Especially, in a third-and-long situation when the offense is in its own territory because it’s a safe call that has a good chance of picking up the first down. Against a man coverage defense, this play is very difficult to stop because defenders would have their eyes off the quarterback.

If the defense rushes five defenders and the offensive linemen could properly identify their assignments, the defense almost has no shot of defending this play. Once the quarterback gets past the first wave, he has a lead blocker running in front of him. If the defense quickly drops back, it makes the block easier.

The offensive line gets into its pass sets, but allows an opening outside for the rushers to take. From there, the blockers ride the rushers up the field and maintain a half man relationship with them, protecting their inside.

This isn’t a “bread-and-butter” play, but it’s a relatively cheap install and could be very effective in certain situations.

On the side the quarterback chose to throw to, the opposing team actually defended the route pretty well, but because the defenders did not know who they were supposed to guard before the route distribution, they played soft and allowed too much space underneath. The inside defender ran with the fade, while the outside defender picked up the quick out.

The quarterback should read the wide side of the field. There was a lot more space to defend and the stack was much farther away from any potential second-level help. Additionally, both defenders run with the deep route, which left the in-breaking route wide open.

Stack formations are easy to teach for the offense, but they force defenses to use a lot of time to learn and practice how to defend them.

Another play that I think is underutilized in high school football is the midline read. On the zone read, the last defender on the line of scrimmage is the read man. When facing a zone read team, opposing defensive ends will spend a lot of time practicing how to squeeze the cutback lane without allowing the quarterback to keep the ball and get outside him.

The beauty of the midline read is that the offense will read the first defensive linemen outside of the tackle, which is usually a defensive tackle. Defensive tackles hardly get any practice trying to defend the option and are usually very easy for the quarterback to read. Additionally, if the quarterback does make a keep read, he gets north and south right away instead of running horizontally.

The read man is the defensive tackle to the left of the center. The center takes a step right before going to the second level to block the inside linebacker. The left guard steps left to double the end with the tackle. The read man steps with the guard to the left, which opened up a gaping a hole for the running back.

The dart play is like power with a pulling tackle rather than a guard. The front side of the line will man-block while the backside tackle will pull around to block the playside linebacker. The backside end is unaccounted for because the quarterback reads him.

The running back is running a sweep toward the backside end. If the end is too far inside, the quarterback would hand the ball off. In the clip, the end stayed home to contain the sweep, so the quarterback kept the ball and followed his pulling tackle for a nice gain.

In this clip, the end went too far inside and the quarterback made a good read by handing the ball off.

To get outside, the Braves use a pin and pull sweep in which the H-back will block the contain man while the playside center and guard pull outside and lead the way for the running back.

It appears the quarterback is reading the backside end similarly to how he would in a regular zone read. The sweep doesn’t take as much teaching as outside zone and is an effective way to get outside when defenses start to condense.

The tunnel screen is a common play in spread offenses, but the Braves use a few tweaks that make the play a little harder to defend.

First, there’s a quick play action element as the quarterback flashed the ball into the running back’s belly. The guard toward the screen side pulls in the opposite direction, which adds to the illusion of a run.

Overall, the Braves have a well-put-together playbook with runs that attack every gap and stresses defenses in different ways by reading multiple defenders and putting them in different types of predicaments. Though they are a spread team, they are physical and want to pound the rock.