Trick or treat: Using the swinging gate on 2-point conversions 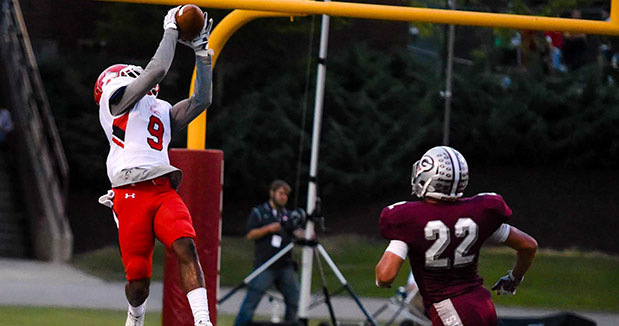 Halloween is right around the corner, which means some football seasons are coming to an end while others are about to start the playoff season.

It is nice to have a trick up your sleeve when you need that extra point to take the lead. That is why going for a 2-point conversion in a game is sometimes better than just tying up a game or sending it into overtime.

The reason going for two is important is to keep the momentum going for your football team and to make the other team rush to try and score. Ideally, that leads to your opponent making a mistake.

As a coach, you need to have those one or two plays that you practice all the time but you never show unless you really need to. Once you use it, the opposing team will start preparing for it.

Here is a little trick for coaches that don’t currently have a 2-point play.

Understand what your opponent does inside the 5-yard line while on defense and throw a monkey wrench in their plans by practicing a play that will get you the yardage you need to score.

Questions to ask yourself:

After answering the above questions, you can make your play and run it with confidence. Keep it in your back pocket like a magician so when the time is right you can pull the rabbit out of the hat and get that 2-point conversion.

This Halloween blog wouldn’t be complete without a treat so I want to share a 2-point conversion play that I like to run and practice a lot: the swinging gate. I am going to show you the basic gate formation I have used with my numbering system.

Position Back Down / Play Call

1 is either a tall wide receiver or tight end

2 is the bruising running back

3 is all-around athlete that can do anything

5 is the speed on the team

The rest of the players are offensive linemen arranged in their usual order.

I will let the quarterback/box coach call the number out loud after he counts the defenders left to right. Then I will give a thumbs up or down on the sideline. Next, the quarterback will either change it or go with the call by saying, “Ready, set, go.”

_ _ 2 = When we outnumber the defenders over to the offensive line side and they will wedge block.

_ _ 3 = Will snap the ball, then delay, and go out and turn around under the field goal post. (No one is accounting for this player.)

_ _ 6 = 3 runs the route above but ends up under the right part of the goal post, the 5 blocks for the QB on a sprint out, and 6 gets a route from the QB, either slant-corner, out, fade, or comeback. They are in a Cover 1 look.

So when the time is right and you think the defense is sleeping go for two and have confidence that you will be successful just like you are in practice.

Anthony Stone is a USA Football Regional Master Trainer and a physical education teacher at Gregory Elementary and quarterbacks coach at Boylan High School in Rockford, Ill. He has coached football at the youth, middle school, high school, college and indoor professional levels. He coached for the U.S. Women’s National Team program in 2010 winning a gold Medal as the Defensive Coordinator with an overall score of 201-0 in 3 games, as well as the defensive coordinator for the 2017 Australian Women’s National Outback Team. Follow him on Twitter @Coach_Stone_MT.