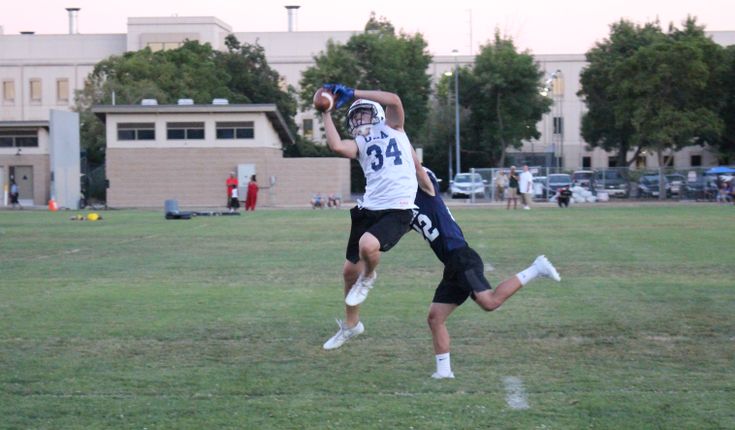 In my last article I wrote about the Vision-Decision-Action cycle and the importance of developing it for on-field performance. We talked about how blocked drills can be useful to expose an athlete to a new movement patterns but added the best way to prepare an athlete to take that skill most effectively to the game includes coupling those drills with choices off a visual stimulus, or open situations.

Today, I want to speak briefly on the Decision aspect of the VDA cycle. I truly believe it is the holy grail of sports performance and what many mistake for “football IQ”, or the infamous “game speed.”  Unlocking decision-making abilities can unlock performance in most athletes.

Want to see more content from Ryland and other football coaches and experts? Check out our Coaches Notes feature, which includes content written by coaches for coaches.

If we believe that any movement on the field is preceded by a choice to use that movement or football skill, then we know the decision-making process is incredibly important. Even if it happens so fast that athlete is not “thinking” about the choice, we know it is happening. The brain is sending the signal to make us move.

We have no doubt that the accuracy of choice will lead to the player using the correct skill for the correct situation and a more successful play. Similarly, the speed of decision and therefore the speed of movement or skill initiation will help a player win position on the field or leverage with a skill.

“Football IQ” is a term that gets thrown around for a variety of different situations, but it all comes down to visual processing and speed of decision-making. Athletes who seem to know what is going to happen before it does or who are referred to as having “great anticipation.”

RELATED CONTENT: A different way for football coaches to look at work-life balance

An athlete who can make a decision more quickly with the information at hand seems to move further ahead of the opponent. They adapt first to the ever-changing inter-play environment and seem to have “football IQ”. In reality, two players may be seeing the exact same thing but the one who sends the message from their eye, to their brain, to their body fastest, wins! They are simply using the same information faster than their peers to make decisions.  Is it really “smarts?” “Football IQ” is really just context-specific decision making.

Quarterbacks who pick up visual cues such as body language, demeanor or exit angle/velocity of a defensive back are using all available information to make a quicker decision than quarterbacks who either need to see more of the “picture,” i.e. the distribution of defenders before recognizing the coverage.  This ability to make an accurate decision based on less information then their peers can truly set apart a high level decision maker.

In terms of “game speed”, let’s imagine two athletes with the same 40-yard dash time and the same pro agility time. This means the movement outputs are the same, but we often see one player move faster on the field. This is often because, in a chaotic environment (where they are not changing direction on a line or at a cone) they are making the choice to change direction or change movement patters faster than their counterparts.

The ability to process information and choose the next course of action more quickly puts that athlete one step ahead, and for each read on a play or each change of direction on the play, this extra step adds up.

The quicker-processing athletes with the same movement output abilities ends up three or four paces ahead of his counterpart at the end of the play. What we often classify as “game speed” is simply quicker information-processing and decision-making.

In this example, the absolute ability of speed or change of direction wasn’t different — it was the ability to absorb information, process information and adapt to the environment that led to one player appearing to be faster on the field. This is probably something coaches want out of all their athletes — the ability to either maximize their physical abilities or overcome perceived limitations.  We all know the stories of the slower, less-agile player who survived on the ability to accurately and quickly make choices faster than more athletic players.

I truly believe information processing/decision-making is the least trained attribute of sport preparation, and especially in football with its martial nature. Finding ways to train decision-making, using open and chaotic drills, can go a long way to improving what appears to be on-field speed and anticipation.

Now, I know a lot of coaches worry about thinking. It is common to hear coaches tell their player to “not think, play,” or “stop overthinking.”  In reality, if understanding movement, we MUST make a choice of what to do. We don’t want to be slow with that choice. If the speed of processing is slow, the coach needs to fix that. Saying “don’t think” is a lot like saying “be tough.” If the athlete doesn’t have the mental tools to do it, those simple statements won’t change his ability. Instead, we should train these tools via context and experience to increase decision-making speed. We should help the athlete make the choices on the field, not give them an easy out such as the idea of not thinking.

Andy Ryland is senior manager of education and training at USA Football. A former Penn State linebacker and member of the U.S. men’s rugby team, Ryland helped develop the Heads Up Football and Master Trainer programs.