Texas A&M quarterback Nick Starkel: 'I really wanted to be a part' of the National Team 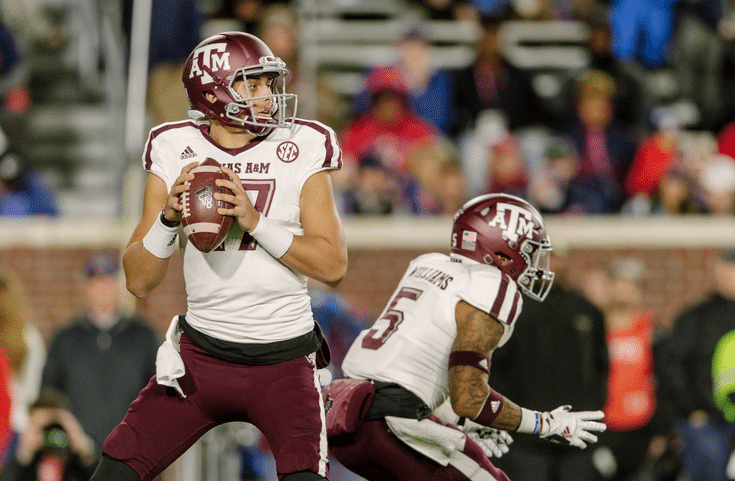 In 2016, Texas A&M University sophomore quarterback Nick Starkel fulfilled one of his lifelong football goals by suiting up for the U.S. National Team. Growing up in New Orleans, Starkel started playing football in elementary school and became a star quarterback when he and his family moved to Argyle, Texas.

While setting school records for the Liberty Christian School Warriors, Starkel caught the Aggies’ attention. He started four games for A&M as a freshman in 2017 before an ankle injury sidelined him for the season; this year, he figures to play heavily in the plans of incoming head coach Jimbo Fisher. He recently spoke with us about his time with the National Team and spoke about how much the honor still means to him to this day.

EM: When did you first start playing organized football and when did you become a quarterback?

NS: I started playing organized football in the third grade in New Orleans. I always had been a football fan. I never got the chance to play flag football or anything like that. When we moved to Louisiana, I was big into baseball and then there I saw everyone playing football. That’s what all my friends did, so I just popped in with them.

I immediately wanted to play quarterback, but I was in at left guard. I thought that was awful! The second game, I ended up being the quarterback and I’ve never taken a snap anywhere else.

RELATED CONTENT: Pathway to U.S. National Teams to change in 2018

EM: What was it about football, when you were younger, that you really liked?

NS: I honestly liked the physicality of it really early on. It’s funny, when I was young I did also play defensive end as well as quarterback. I just loved hitting the quarterback, which is ironic now. Being a quarterback when you’re younger, you don’t throw the ball that much. You run quite a bit, so you develop a toughness and you learn to get hit and get right back up. I love that about the game even now.

EM: Obviously, you had a lot of success on the field in high school, which led to you catching the attention of the U.S. National Team. How did you first learn you’d made the squad?

NS: So, originally, I wasn’t even supposed to be on the team. One of the quarterbacks on the team got hurt and couldn’t play. He sent a group message to some of us other quarterbacks letting us know and that Team USA was looking for a replacement. I thought ‘Oh my gosh, they’re playing at the Dallas Cowboys stadium and that’s just 15 minutes from my house!’ I told him to please give them my name and number and that I would drive there myself, they didn’t have to do anything! I really wanted to be a part of the team.

I sent my film into the coaches and the reached out to me on Twitter and told me I could be part of the team. I really couldn’t believe that it was happening. I was so excited. I had always dreamed of playing in that game in that stadium and to get the opportunity was just incredible.

EM: What was it like for you to put on that uniform and represent your country in that game? What was going through your mind?

NS: Oh man, what a week and what a game it was. We won 33-0 and it was an incredible experience. I remember having my whole uniform planned out. I was gonna put this on and then this on and then when I had it all on it was just so sweet-looking. I knew that was a once-in-a-lifetime experience and I was fortunate to get the chance to have it.

EM: What are some of your favorite memories about the whole experience?

NS: For me, that week and that game was the first time being around really elite level players like that. I was the only kid from my school to receive a scholarship offer to play (NCAA) Division I and to be around the guys on my team was amazing.

I remember one practice I was throwing to Mecole Hardman– now, he’s super fast. He was super fast in high school and he’s still super fast. I was throwing him routes and the first four were behind him. He goes, ‘Look, Nick, you put it in front and I’m gonna go get it. You’re not gonna overthrow me.’ It was so awesome to be around a group of guys like that. I still have a bond with a lot of those guys now. Seeing them during the season now since a lot of them in the SEC is something really special.

EM: Lastly, before we let you go, you’ve just wrapped spring practice; what can people expect to see out of Nick Starkel this coming season?

NS: Spring practice was really good. We got to have our first practices with Coach Fisher and he told us that everything is open competition now and everyone is competing for starting jobs and playing time. I’ve been able to grow a lot as a player. This year, I think you can expect to see me play tougher both mentally and physically. I got my weight up, so I’m more comfortable taking off and running when I have to and standing in the pocket longer to make a throw and take a hit if need be. I think we’re going to have a great year.