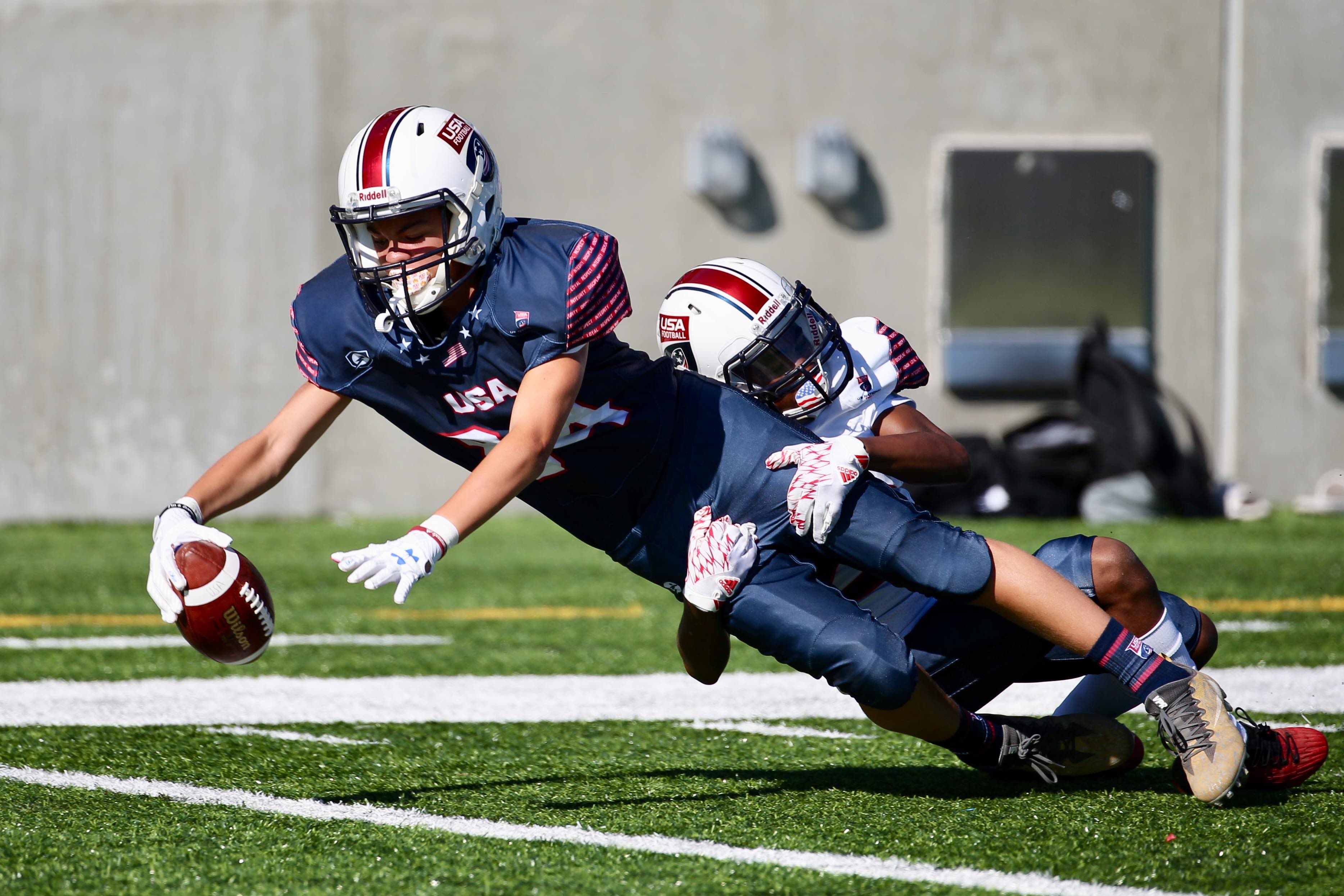 (Aiden Chavis scores on a 30-yard pass to give Courage the lead in Game 1. Photo via Mike Fender)

MVP Ramon Brown caught a touchdown pass and the U-15 Stars scored three times in rapid succession in the second quarter — and then held off a late rally from the U-15 Stripes to win, 21-14. Brown, from Life Christian Academy in Chester, Va., had 22 yards rushing and three catches for 43 yards and a TD.

After a slow start from both teams — and a scoreless first quarter — the Stars grabbed the lead with a 70-yard drive midway through the second quarter. QB Jaden Keefner (4-for-5, 63 yards, TD) threaded the needle to TE Caden Huseby for a key 25-yard pickup on third down, then four plays later lofted a gorgeous pass to Kade Schentzel for 28 yards and a 7-0 lead.

On the Stripes' next play from scrimmage, a loose ball was scooped up by LB Westyn Pemberton, who ran it in for a touchdown and suddenly, the Stars led 14-0.

On their final drive of the first half, Stars QB Peter Zamora hit Brooks Bortle twice — and then rolled to his right and hit Brown, who was crossing back to the left side of the field and roared into the end zone for a 14-yard TD catch and a stunning, 21-0 lead.

The Stripes needed a big play and got it just before halftime, as Max Thomson hit WR Sebastian Lopez at the 50 and he blazed the rest of the way for an 82-yard touchdown strike — making it 21-7, Stars, at the half.

The defenses took control once again in a scoreless third quarter. The Stars had two big interceptions on back-to-back possessions — a one-handed pick by Julian Diedrich, and one by Jalil Singleton off a tipped pass.

The Stripes finally put together a long drive at the end of the third quarter, and facing 4th-and-goal from the 14, Thomson hit Lopez again in the middle of the end zone for a touchdown, cutting the lead to 21-14.

The Stripes got the ball back late with a chance to tie the game, but the Stars defense again rose to the challenge and stopped the Stripes on 4th-and-13 to seal the victory.

Lopez ended up with 114 yards receiving to lead the Stripes, while Jacob Gibbons was the leading rusher (7 carries, 79 yards). Thomson ended up 6-for-10, for 120 yards passing and 2 TDs. 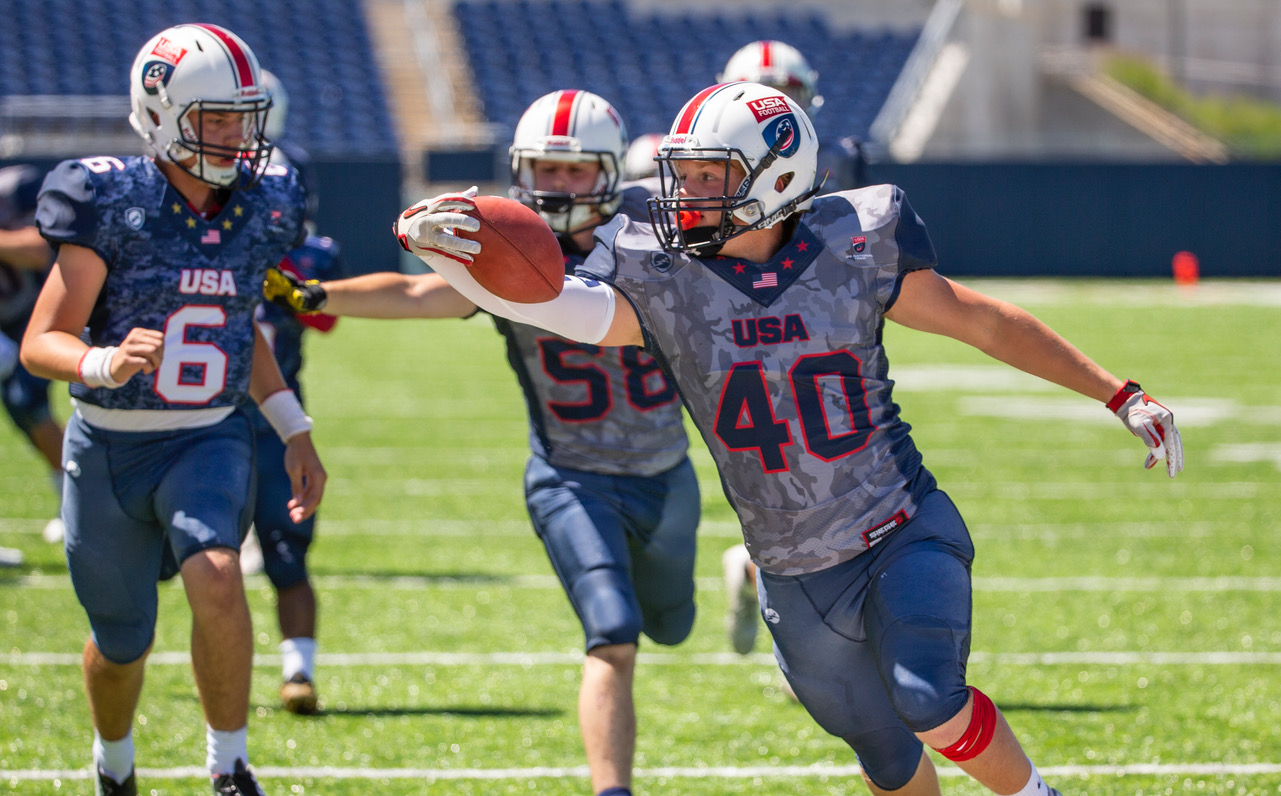 Woah nellie, we have ourselves a ballgame! Sebastian Lopez hits Max Thomson to make it a one possession game! 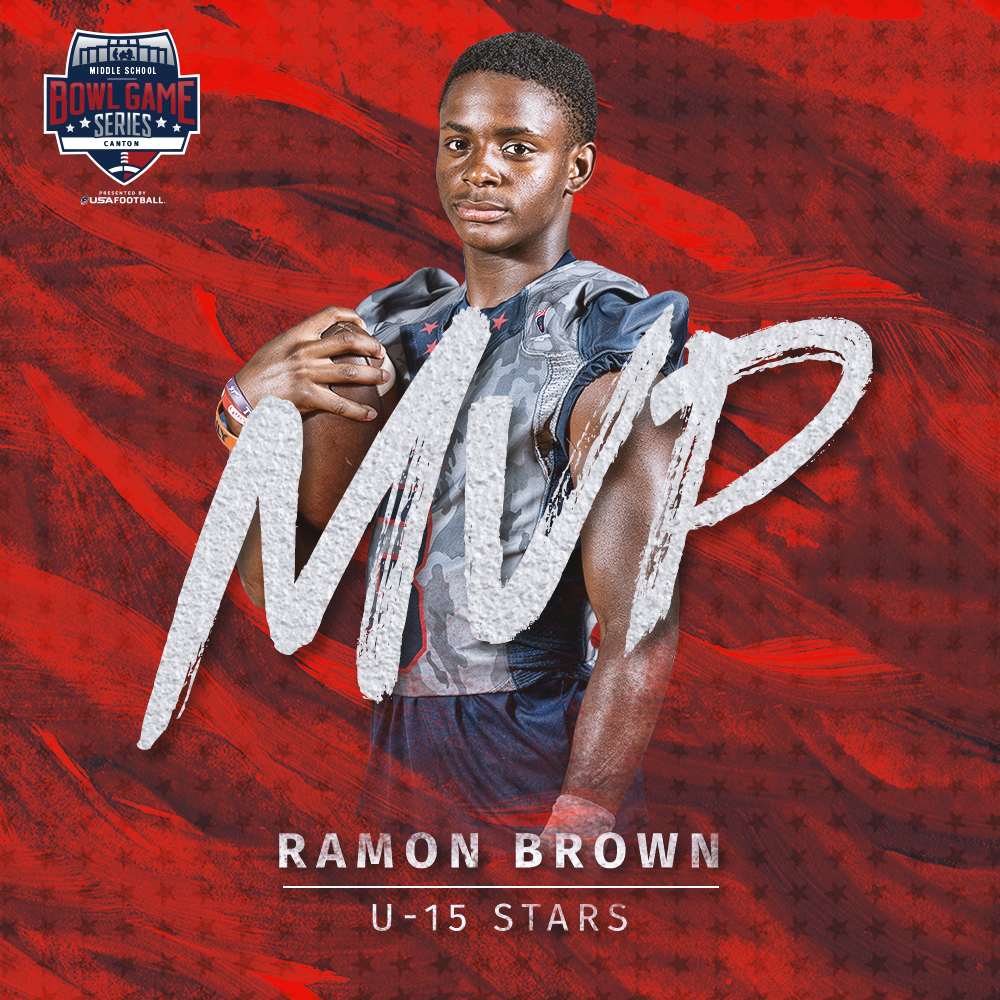 Stars QB Aliam Appler also threw for two touchdowns — both of them long strikes to WR Jaylon Mckenzie. They connected on a 48-yarder in the first half, and then an 80-yard bomb, with Mckenzie streaking down the left sideline, late in the third quarter to cut the Stripes lead to 28-14. Appler, from Wrightsville Beach, NC, finished with 154 yards passing.

But on the very next drive, Knight faked a handoff and then burst downfield, bolting 63 yards for a critical touchdown to give Stripes more breathing room. Knight, from John Long Middle School in Wesley Chapel, Fla., finished 5-for-5 passing for 104 yards and 2 TDs, and added 4 carries for 76 yards and a score.

Running back Christopher Jordan Jr., from Creston Middle School in Indianapolis, rushed 14 times for 110 yards and a touchdown to lead the Stripes' rushing attack.

The first half was filled with offensive fireworks — with both teams connecting on big-yardage plays for scores.

With Stripes leading 14-0, Stars got on the board with a gorgeous 48-yard touchdown pass from Appler to Mckenzie. Less than 90 seconds later, Knight connected with Oluwakoleade Osinubi on a 66-yard strike to extend their lead to 21-7 midway through the second quarter. Osinubi, from Avon, Mass., also hauled in Clark's second TD pass of the game in the fourth quarter, and finished with 106 yards receiving.

Jaxon Smolik led the Stripes downfield toward the end of the first half, including converting on a 4th-and-10. Trevon Alford punched it in from the 1-yard line for the score to make it 28-7 Stripes at the half.

For the Stars, Xavier Terrell added a fabulous 62-yard run for their final score of the game, midway through the fourth quarter.

Another angle of the touchdown connection that put the U-14 Stripes up 14-0 over the U-14 Stars!

Xavier Terrell will not be denied!!! 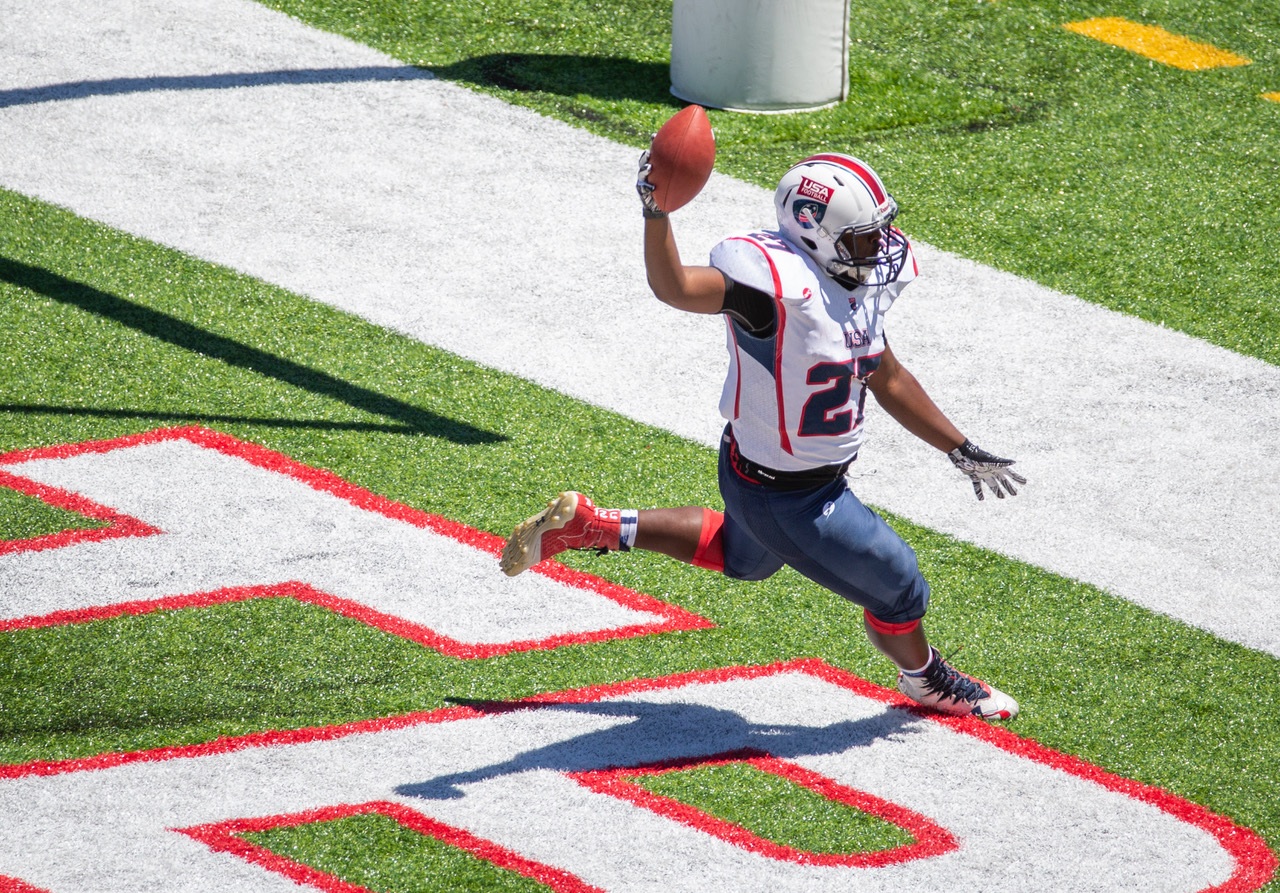 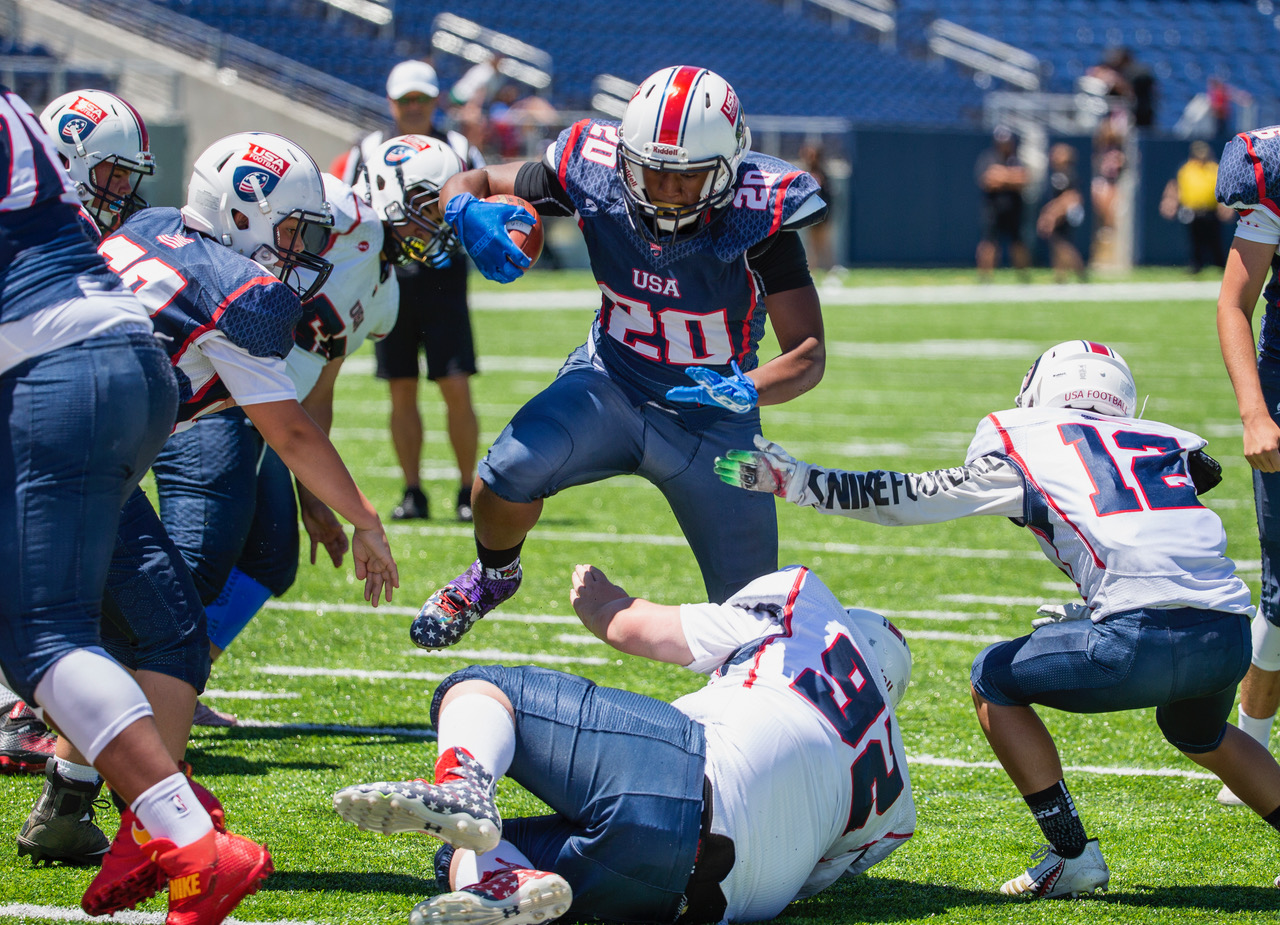 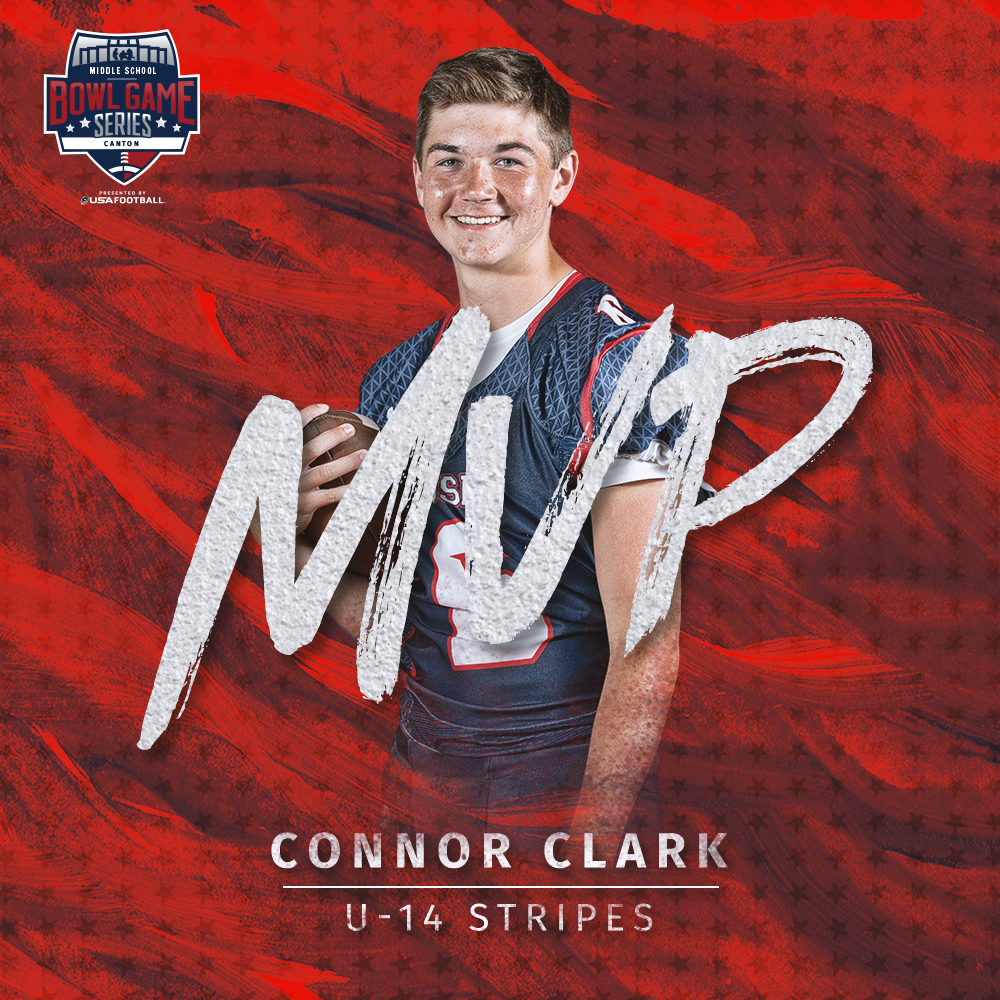 GAME 1: U-14 Courage 23, U-14 Pride 7
Jason Lockamy Jr. returned a fumble 43 yards for the clinching touchdown as the Courage defeated the Pride 23-7 in the first game of the Middle School Bowl Game Series Saturday at the Pro Football Hall of Fame.

Lockamy, a 5-9, 165-pound linebacker from Lake Ridge Middle School in Woodbridge, Va., delivered on a scoop-and-score midway through the fourth quarter to seal the win for the Courage, as the Pride tried to rally from a 16-0 deficit.

Jonmokee Lo turned a short pass from Cody Pagach into an 80-yard touchdown for Pride, which gave them momentum and a shot at a late rally — until the big fumble return by Lockamy. 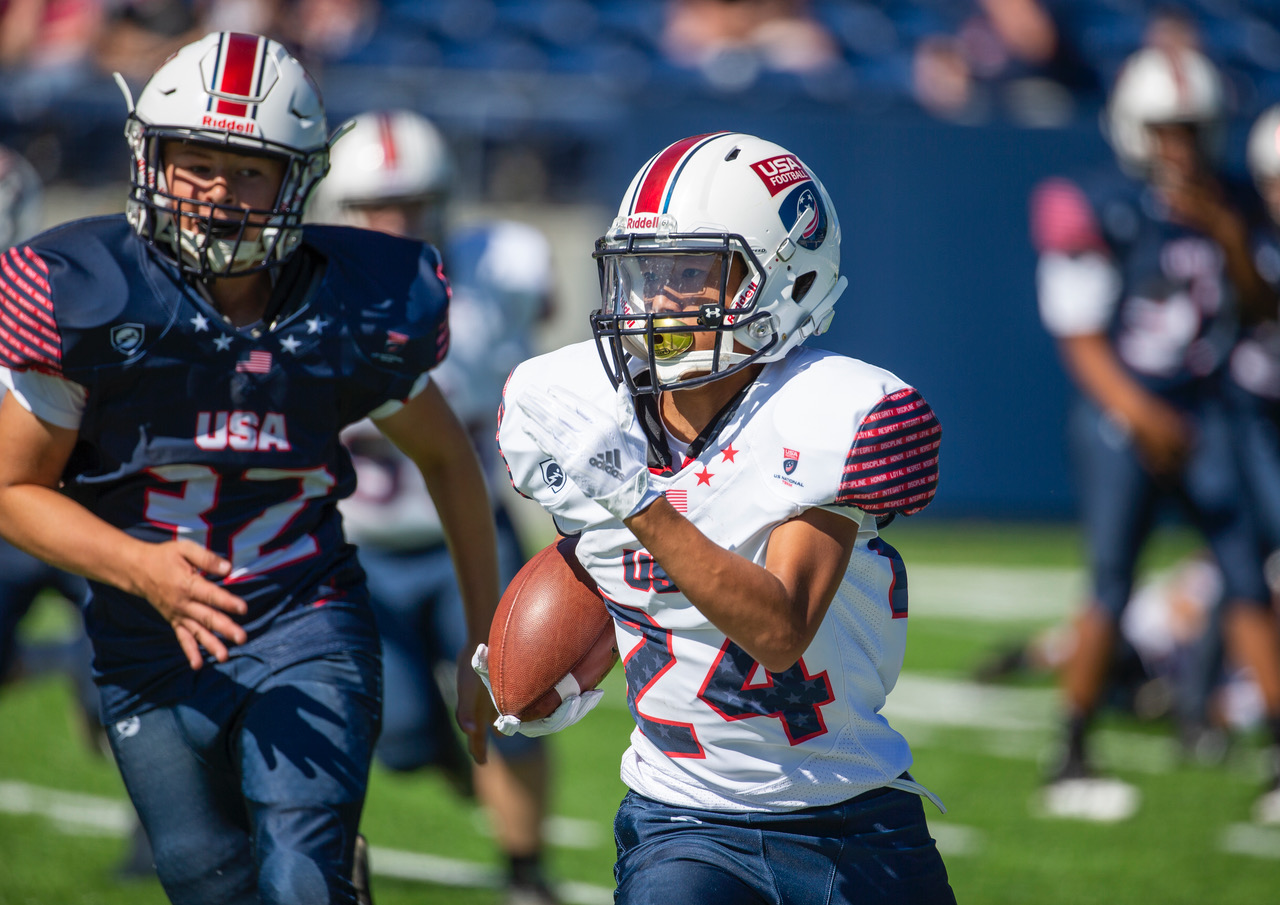 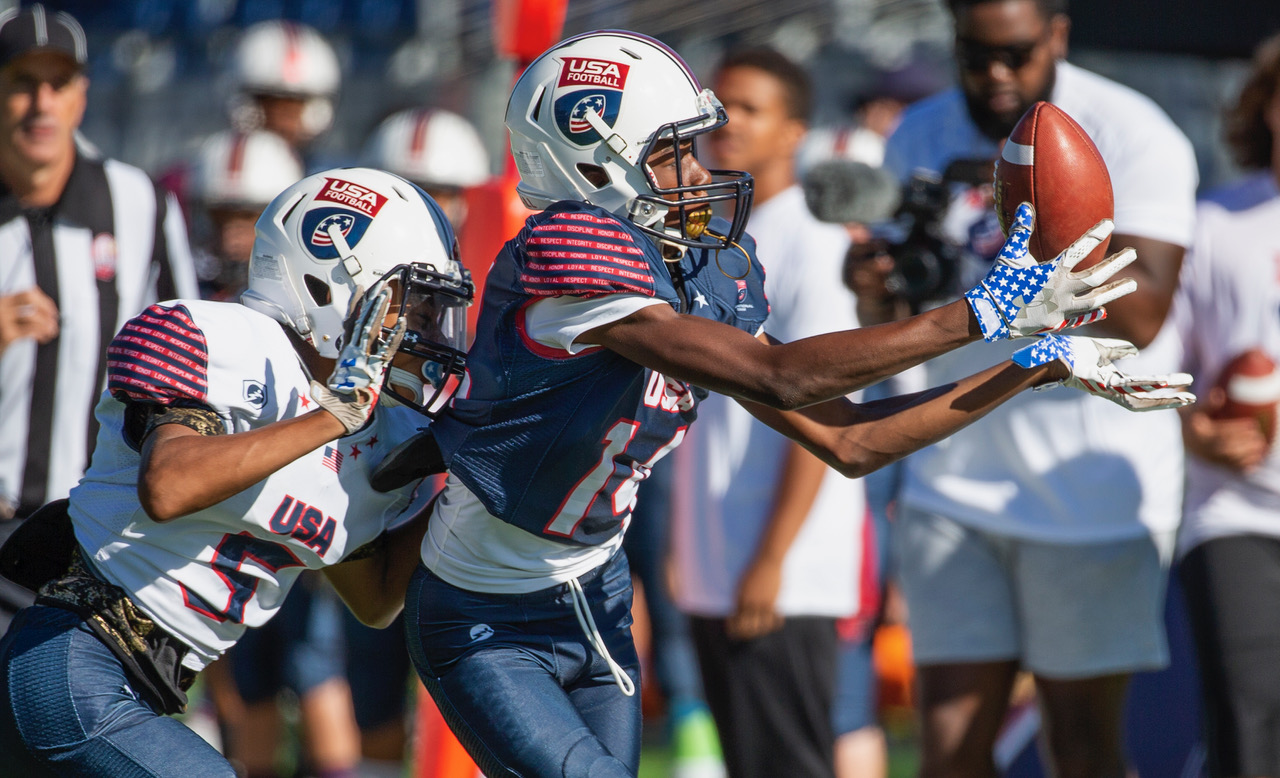 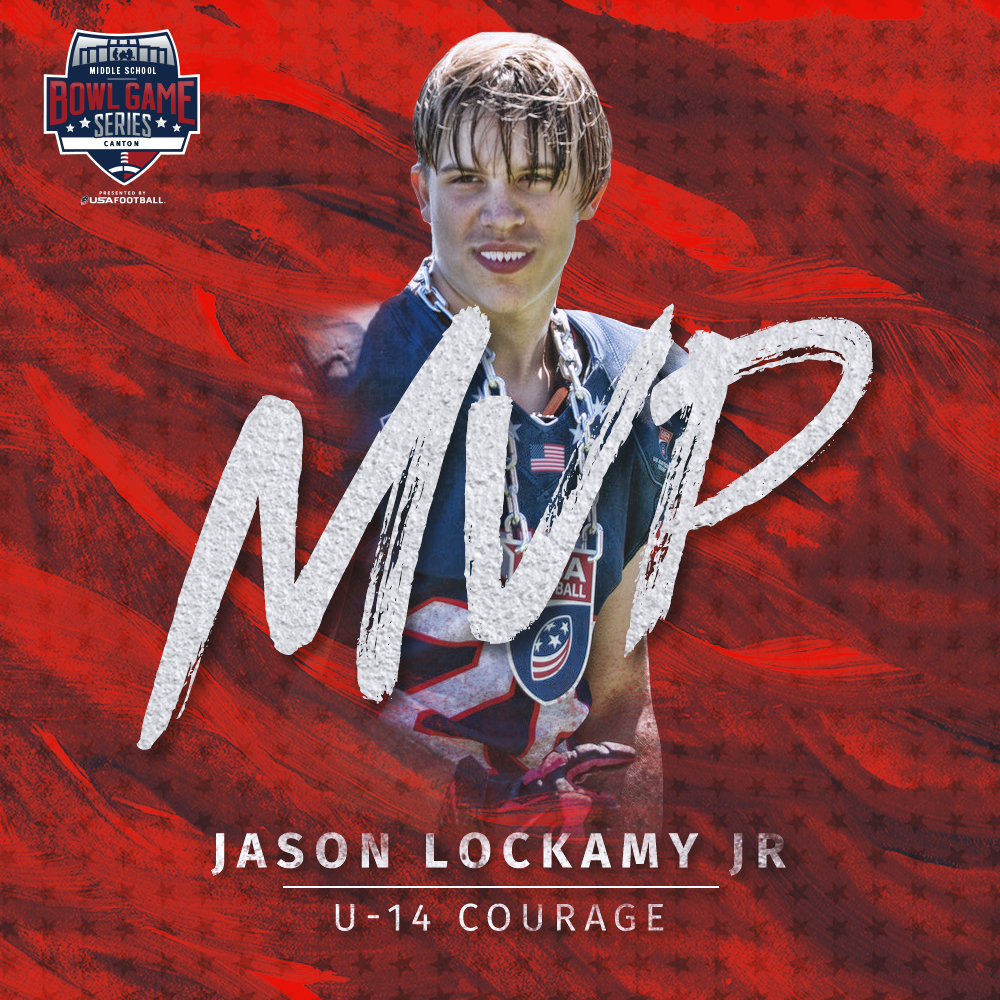 8:30 am: It's an absolutely picture-perfect morning here in Canton, Ohio. The first game of the day is 30 minutes away, and the Pride and Courage are on the field, warming up for kickoff. Stay with us all day for live coverage here and on our Facebook page for the live stream.

“There’s nowhere else that I’d rather be,” said Jason Tenner, USA Football’s Regional Director, in the week leading up to gameday. “That’s why I told everybody during the orientation that you get to be here with elite athletes from 37 different states on the Fourth of July playing America’s game. Where else would you rather be?”

“We want the kids to be excited,” Tenner said. “It’s a tremendous opportunity for them. We all wish we had these opportunities when we were their age. They’re fortunate to be here. I want them to soak it up, enjoy it, and do what they came here to do, and that’s just play good football.”

“Each year we keep growing, which is nice in terms of not just growing in size, but growing in experience as far as what we’re delivering to the next generation of great football players in our country,” said Aaron Ingram, senior manager of the U.S. National Team program for USA Football.

“We keep growing our experience, growing the ‘wow’ factor and the sensationalness of what it is and what it means to wear the red, white and blue,” said Ingram. “To play in Tom Benson Stadium is pretty special as well. Anybody who has ever walked through the hall … right away you get chills.”