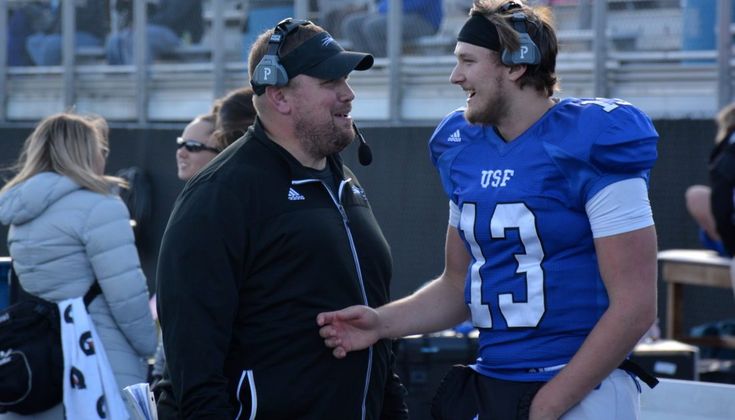 This third part of the series features Trevor Miller, who serves as co-offensive coordinator, offensive line coach and strength and conditioning coach at the University of Saint Francis (Indiana), the two-time defending NAIA national champion.

After a two-year stint at Morehead State University, Miller joined the USF staff in 2005, and was named American Football Monthly Strength Coach of the Year in '06. Five of his linemen have earned AFCA All-America recognition in the past seven seasons, along with 20 all-conference honorees, including Brian Gegner, who won the Rimington Award as the best NAIA center in 2016.

Here, Miller discusses how off-season and in-season training have contributed to the Cougars' success:

Q: For a program to be successful, players have to show up in August in shape and ready to go. How do you ensure that happens when most go their separate ways after the spring semester?

A: We reward players that are in shape. If they pass the conditioning test requirements, they don't have to condition during camp. This allows them to recover better in between practices. It also accounts for the fact that players who are training hard over the summer have more miles on their wheels than the players who need a little extra work to get in shape.

Q: Whether it’s players who remain on campus or those who go home during the summer, how do you approach summer training leading up to the season?

A: Our two summer cycles are the start of our competitive season training. We add a lot of athlete work to the program (run, jump, throw, change direction). We establish benchmark levels of strength that we can maintain throughout the competitive season. We produce as much force as possible on our main lifts, training with weights in the 70 to 85 percent range of our training max. We want to own these weights until the end of our competitive season. Very little emphasis is put on being the strongest team in the country in July. The goal is to be the strongest team in December.

Q: From when practice begins through the end of the season, what are your strategies for continued strength and endurance improvement?

A: We manipulate intensity, volume and bar speed throughout the season, focusing on benchmark levels of strength established during the summer. In-season we first adapt the addition of the football workload to our training. After we finish the adaption phase, we have three main types of training days: strength, force and unload/corrective. On strength days we work up to benchmark weights, and on force days we move those benchmark weights faster and for fewer reps.

Q: Is there a delicate balance between maintaining and increasing gains while also keeping players fresh for the field?

A: Yes. First you start with rates of exertion on the field. We monitor practice time, total game reps, physicality of the game, travel time on a bus, etc. We also talk to the players. Their input is vital. The weight room plan with this information is formulated through controlling intensity, volume and bar speed. Exercise selection and constantly rotating movement patterns are also important. You can get a lot out of training around 60 to 80 percent and applying force to the bar. Get the hamstrings and the glutes moving and working right. Keep the shoulders and back muscles strong. You have to pay attention to nutrition and sleep habits. None of these are little things. They're all extremely important to in-season training success.

Q: What dietary guidelines do you give players to follow during the season to maximize results and recovery?

A: We want a focus on hydration. This is constantly a topic of post-practice discussion by head coach Kevin Donley and our athletic training staff. We want at least five different colors of fruits and vegetables a day. We try to treat practice sessions and lifting sessions the same: protein and carbohydrates before and after, every time you train.